CLOSE TO MY HEART

Last week, I recorded lovely guitar accompaniment to a solo piano track for my newest meditation version of “Farewell.” It took many hours (I recorded 20 takes of ten minutes each), but my song gives me incredible joy.

My oldest son helped me create a new YouTube channel for my meditation music. Below is a segment from my new version of “Farewell Meditation Song.”

I felt nervous about traveling alone since breaking my ankle. But I went ahead and cautiously planned a trip during the week of Thanksgiving to visit my oldest son. Because I had two suitcases and a guitar, I decided it would probably be safest to ask the airline for help. Once again, I sat in a wheelchair with thankfulness that this was temporary.

I closed my eyes during take off. As the plane roared into the sky, I could feel tears squeezing my eyeballs. They pushed through my shuttered eyelids.

For the three months that I was “non-weight-bearing” (a term used during recovery from a broken ankle), traveling seemed very far away. But here I was, leaving the comforts of home and seeing my son after four months apart. I felt like a prisoner released from jail and couldn’t believe I was free. As tears continued rolling down my neck, I acknowledged that they were happy tears. This Thanksgiving definitely held more thankfulness than I’d ever had in a long time.

I looked forward to seeing my son. This was his second year teaching first grade. His achievement was huge and my heart swelled with so much pride that I felt like I would burst. My emotion overflowed – I was definitely very close to my heart now. “Close To My Heart” sounded like a nice title for a new song.

Shortly before this trip, I had sought out another opinion for my ankle. I wanted to have my hardware removed and my surgeon told me I needed to wait a year. In my support group, many people had theirs out sooner.

A new friend from an online ankle fracture support group was having hers out today, in fact. Her accident was two weeks after mine. I was eager to see how it would go for Missie, who was an avid tennis player like me. Too bad she lived in Virginia because it would have been wonderful to play with her.

I brought to my appointment several x-rays taken by the hospital. The doctor was very nice and answered a lot of my questions.

I received his report a few days later. He referred to me as a “well-nourished female.” Oh, well. At least he didn’t write fat. Certainly, the ordeal of being sedentary and depressed did nothing to help my weight.

This doctor recommended I wait a year or more to remove the hardware. But what stuck out for me was something that my other doctor had never mentioned. I had an avulsion fracture on the other side of my ankle. It was exactly where my pain was located. I looked it up and this is what I found:

Avulsion fractures happen when a small piece of bone breaks off the site of the main fracture, sometimes affecting the ligament located near the break. They can be very painful, and can cause a lot of pain and discomfort years after the initial injury.

I contacted my surgeon and he confirmed that I indeed had one, but said it was “very small and unlikely to be a source of my pain.”

Yet I had gone through so much pain since being allowed to walk again. I was angry that it was never mentioned to me, despite showing up on every x-ray. Thankfully, I was able to put this ordeal behind me, because since having a cortisone shot my pain had ebbed away. 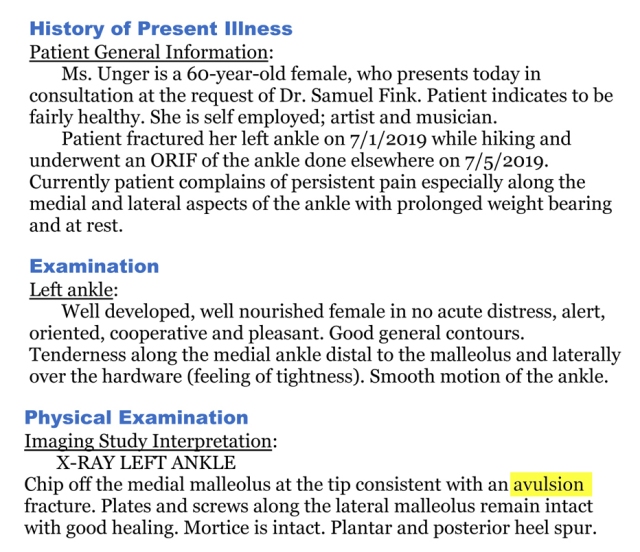 My former high school boyfriend, Dr. Sam Fink, has been such a wonderful friend. We both reconnected through my blogging in 2010. He helped me with this referral.

It was wonderful seeing my son. We both hugged each other tightly and his apartment felt cozy. He had decorated it since I was there last and was excited for me to try out his new couch.

I really enjoyed our time together. He had so much more confidence in his teaching abilities. He enthusiastically regaled me with classroom anecdotes. I was deeply relieved because I had been so worried about him.

His grandfather was a consummate teacher and would have been so proud. I wondered if my father had known this would happen, when he took his challenging grandson under his wing and guided him. My father died before he could know what a difference he had made, especially influencing his grandson’s career choice. Sometimes, I heard my father speaking to me, praising me for supporting my son the way I did. I felt so close to my heart at those times and would whisper sweet words back to him.

Our week together flew by. On Thanksgiving Day, we ordered Indian Food delivered. My son is vegetarian and it was fun tasting so many interesting dishes. This was a Thanksgiving I’d always remember.

Every day, I pulled out my guitar to work on my newest meditation idea. I practiced a guitar counterpoint with a lovely piano track. Trying to find the best chords and fingerings kept me busy. But I loved the music and it really touched my heart. I usually recorded guitar first and then added piano notes later on. This approach for my meditation song “Farewell” was reverse.

On my last day, my son shared with me a beautiful message he just received. The mother of one of his students wrote that she was so thankful my son was her daughter’s teacher. She explained that the year before her daughter hated going to school, but now she was excited to go to his class every day. I was overjoyed for him to hear this. He wrote back a thoughtful message and I could tell he appreciated her words.

Throughout my week, the biggest standout was that I could walk again without pain and for much longer distances. On my day of departure, I decided I didn’t need airport assistance. I checked in my bags and walked through the airport with my guitar on my back.

These lyrics from my song “Watching You Grow” really resonate with me at the moment.

It was three days after I came home, when I pulled my tennis bag out of my closet. There was an evening beginner’s workshop at a nearby tennis center. I felt ready.

The biggest irony was that I wore the same old tennis shoes I had fallen in while hiking. Unfortunately, my new court shoes didn’t fit. I had bought them a week before my accident and now they were too tight.

I took a deep breath while standing on the court in the cold night air. It felt amazing, though I did have trouble seeing. I needed a new prescription for my contact lenses and made a mental note to take care of that soon, as well as buy new court shoes.

Despite my vision, I was able to hit a few good shots. Sprinting was scary, and I let short balls bounce without running to them. I wasn’t used to being on my feet for two hours and sunk into my car with total exhaustion afterwards. I missed the energy I used to have. The word patience continued to echo through me. I looked forward to eventually joining my doubles group again that I’ve played with regularly for over 15 years.

My blessings overwhelm me. I find myself whispering this: Thank you, God, for my wonderful children – for my beautiful music and songs – for my continued healing. Despite having an avulsion fracture on top of my broken fibula – I am going to be okay.

This is my song cover for “Farewell Piano & Guitar Duet,” soon to be released on Insight Timer.

I’ve have struggled with depression since July.

But now I am re-framing my experience into something that led to growth, expanded my heart, and deepened appreciation for my freedom.

I’m going to share some other attachments below related to what has been going on in my life.

Receiving positive messages continue to inspire me as I follow my dream.

Last month, I released a vocal track on Insight Timer. It took courage because I knew people far preferred my instrumentals for meditation. When I received a critical message, I replied in an honest way. 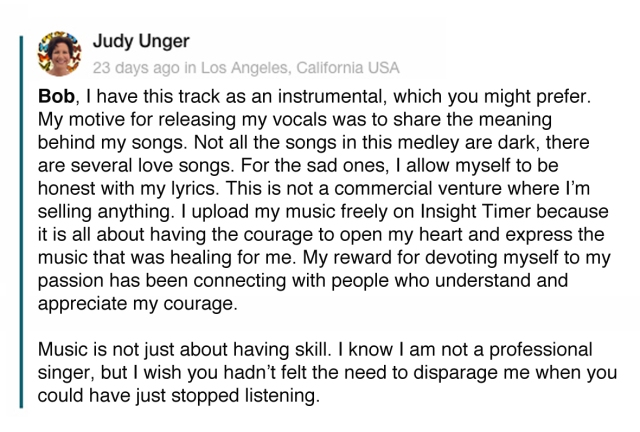 When I received the message below about the same vocal track, it confirmed exactly why I wrote my response to Bob. 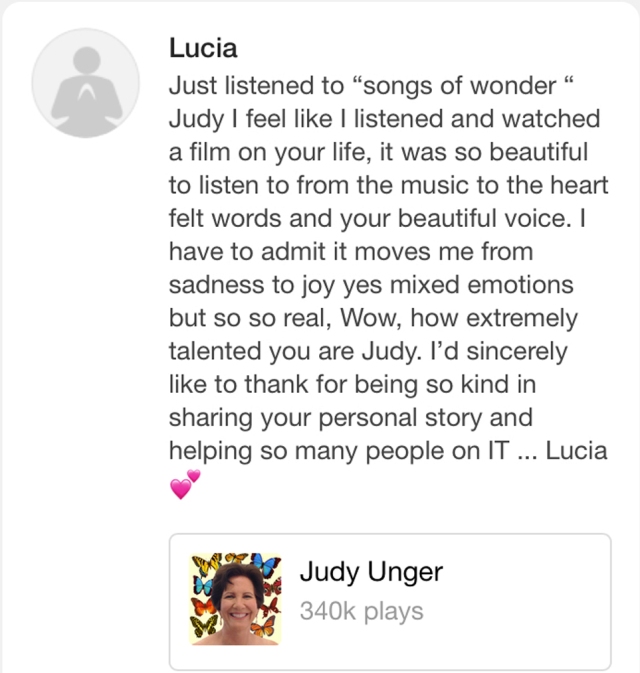 Lucia is now a new friend of mine in Ireland!

Moving on from Insight Timer messages, I want to share more about my Ankle Fracture Support Group on Facebook. The sharing of information, support and understanding has been amazing to behold. Below are message from that group. 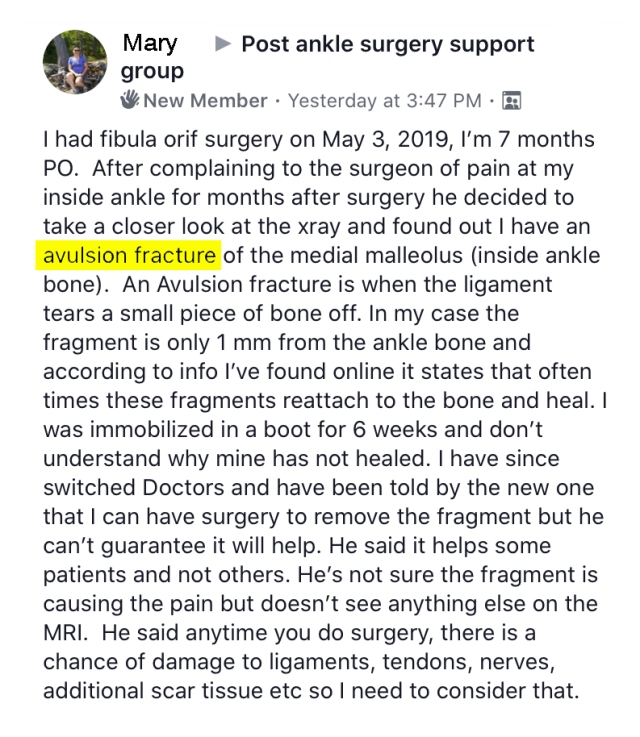 It seems that Mary’s x-ray also deserved a closer look when she found out later that she had an avulsion. I wrote a response that recommended she try a cortisone shot before having surgery – or at least to get a second opinion.

This message is sad. But so many people wrote to Lisa to reassure her that she would be okay (and to find a new surgeon). I understand what she wrote, especially about putting on weight.

My new friend, Missie, had her hardware out today! She is doing very well and I share her posts. 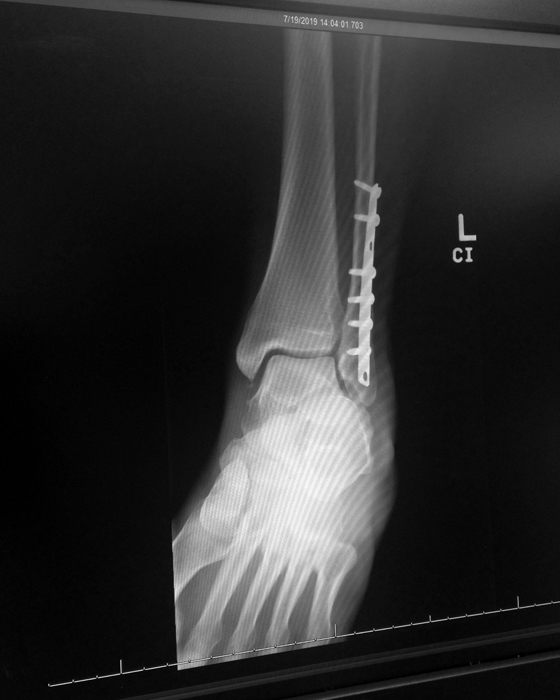 I end my post by sharing a picture taken with my beautiful daughter earlier this year.

5 Responses to CLOSE TO MY HEART