Autumn leaves always remind me of my son’s death.

I share below a link to see a video of my open mic performance last week. I played my song “Angel in the Sky” to honor my deceased son, Jason. With heartfelt lyrics, music and my voice – my song tells this story in another way.

Link to my story and song “Angel in the Sky”

The post title of “My Lovely Light” is from my song “Angel in the Sky.” Today is the twenty-second anniversary of Jason’s death. He died at the age of five on October 6, 1992.

A decade after his death, I was very busy raising my other children. It was definitely a diversion from grief and I became very adept at burying my feelings. Although I seldom mentioned him to anyone, not a moment went by without the feeling of deep sadness in my soul.

When I began this blog in 2010, it was the beginning of my healing. I wrote about Jason’s life and death six months later; it unburdened me in many ways. Since then, I am amazed at how much my grief has transformed.

It is very inspiring to share my feelings after suffering for so many years. How I arrived at such a beautiful place is miraculous for me.

I often feel as though God blessed me with music to guide me. Music has definitely brought me tremendous healing and inner peace.

My life is “filled with song” (that is actually a lyric line of mine). Every single day I sing, listen to, compose and record songs that relate directly to my life with almost every word.

This past month, I was working on several songs with an important theme that clearly explains my healing.

I have often mentioned growing up with “black and white” thinking. This probably ties into my using metaphors of darkness and light for my songs.

For me, darkness represents grief and horror. Light counters this with brilliance, enlightenment and spirituality. 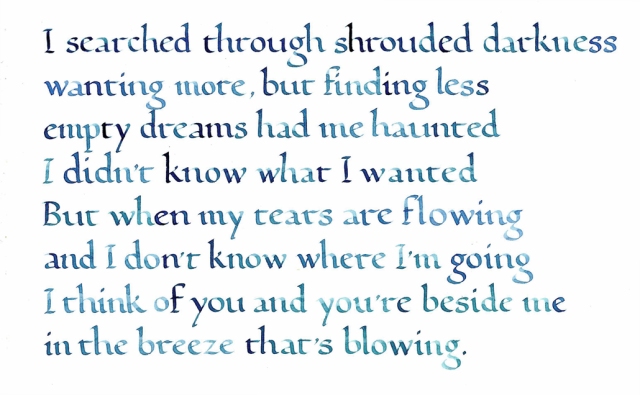 These are the original lyrics for my song “Beside Me Always.”

My journey of songwriting began when I was very young. I wrote “Beside Me Always” when I was 17, but revised the lyrics after Jason died so I could read them at his funeral.

My revised lyrics were:

“I’ll search the shrouded darkness, wanting you and nothing less. Seems my whole life I’ve waited, in darkness that was fated.” 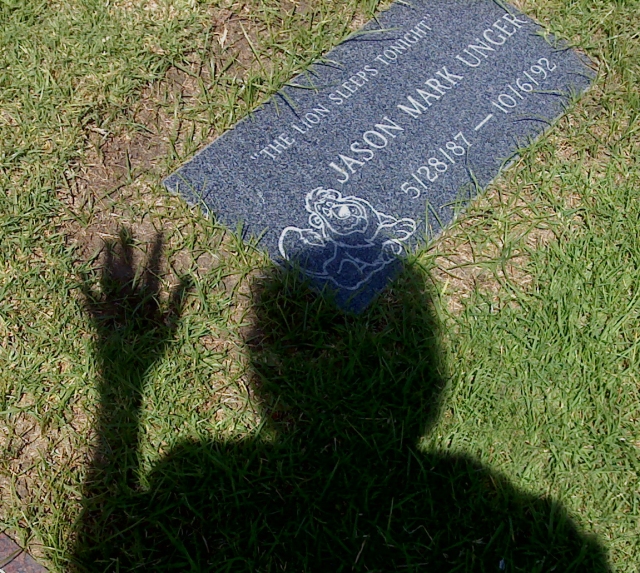 Losing my child was quite different from losing my parents. He was ripped from my soul and my life was forever altered.

I have countered how much I miss him physically with the image of light.

He is not visible, yet he comforts and sustains me. He conquers my fear of darkness and with the fairly recent deaths of both my parents, I also feel that way about them, too.

An obvious rhyme with light is sight. My lyrics of being “out of sight” explain the absence of body, but not love.

From my song “Angel in the Sky.”

From my song “Somewhere I Can’t See.”

From my song “With Me”

From my song “My Shining Star”

With these feelings, I want to share my response to a newly bereaved mother. I say, “Newly bereaved” because it has been almost two years since my friend, Sammi lost her beloved son. Her grief is almost as raw as the day he died because that is the nature of losing a child. Moving on is incomprehensible after two years.

I don’t see moving on as leaving grief behind. For me personally, I’ve just moved with it to another place and after that it changed completely from the way it used to be. Healing simply means that I have scars from a horrific amputation that I never thought would stop bleeding.

I was thinking of you and wanted to share a link to another mother’s words about grief. Even though her son died by suicide, I thought that what she wrote might be something you could relate to.

The fall always reminds me of my son’s death. It will be 22 years this coming Monday since he died. My mother was dying around this time last year and her first anniversary is coming up, as well.

I keep creating music that helps me.

Thanks for sharing Judy.  I absolutely can relate to this Mother. It angered me when I read the line that said she has been accused of wallowing in her grief. I know that we, as a group, scare most people because of what we represent.

Hope all is well with you. I don’t care if its 22 years or 22 minutes…. for those of us in this club it will always feel like…. now. My thoughts will be with you on Monday, Judy. I know your beautiful boy will be with you as well.

I like to think that they miss us as much as we miss them.

Sammi, I know what you mean about that line of wallowing in grief. Even though I share a hopeful message of healing, I often feel like I’m viewed as someone who overly dwells upon grief.

Thank you for caring about me and thinking of my death anniversary on Monday. The truth be told, I do not suffer like I used to anymore.

A long time ago, I had feelings similar to ones you have expressed. Back then; I never imagined reaching this place, so I am sensitive to how this might be for you to hear.

I have been on my grief journey for a long time. For years and years I suffered and very little changed after the first decade.

When things shifted for me, it was miraculous and something I consider to be one of the greatest blessings in my life. Your message inspired me to write. 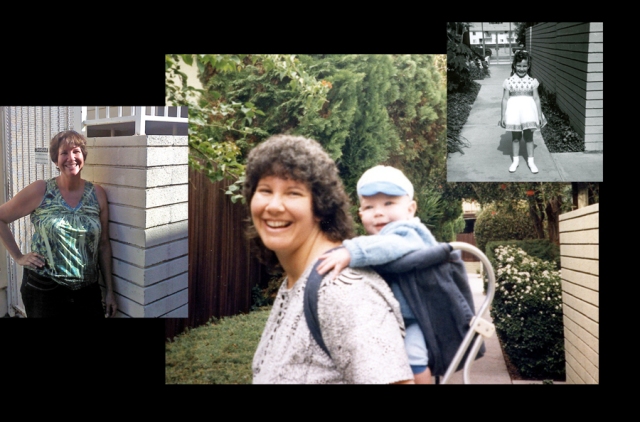 I have so many memories where I live now. I remember my childhood and of bringing Jason to visit my parents.

I thank you very much for that because your words led me to gratefulness for my healing. Your last line below is what touched me.

I like to think that they miss us as much as we miss them.

I truly understand what you meant with those words.

The day after Jason was buried, I was tortured because I worried about how much he missed me. I knew my feelings were irrational; I felt he couldn’t survive without me and he was dead. It made me crazy!

It was because I had been his caregiver. I was his universe and he was mine. 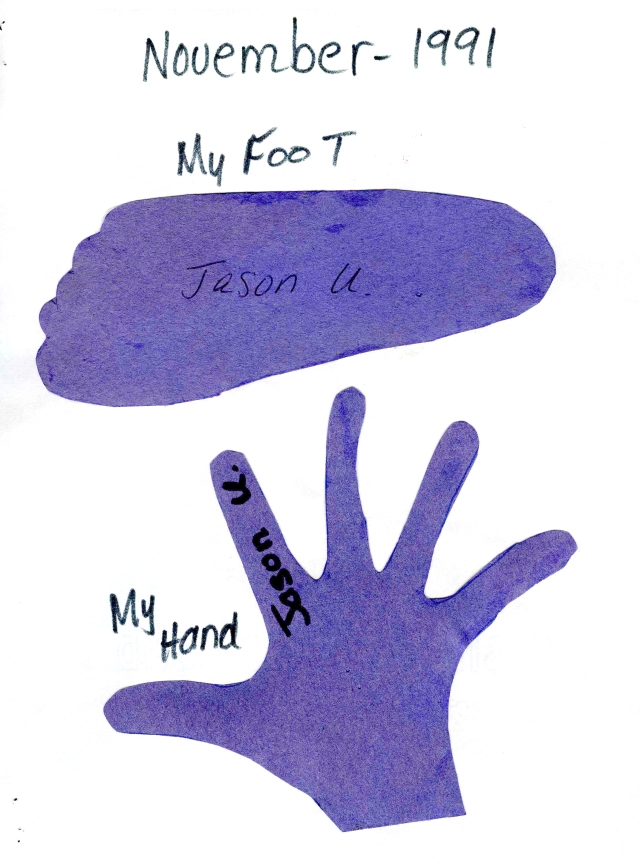 Jason was a sickly child with a severe congenital heart defect. Over the five years that he lived, there were many health crises. I was always very stressed over his poor health.

He was breathless and weak. Because he was very small, I carried him most of the time because he became too tired when he walked. He had great difficulty eating and vomited every single day. I can still remember him sleeping across my chest up until the time he died – he was often very cold.

Yet in spite of his illness, he was a happy child. I knew it was because I catered to his every wish.

With his death, I was anguished because I felt that he still needed me to comfort him. I awoke at night hearing him crying for a blanket. I couldn’t imagine how he could be without his mommy. I kept imagining that he was freezing in his coffin.

Even though I knew intellectually he couldn’t feel these things, sometimes I projected him being jealous of his siblings’ good health and ability to grow up. I saw Jason as being very angry for not having that opportunity.

Jason was very jealous of his younger brother and received most of my attention.

These feelings spun through me for years and years – until I reached the place where I am now. Jason died and left my life initially. But with my healing, he returned.

I don’t believe that Jason misses me anymore because I feel like he’s with me all the time. Sometimes at night I feel him whispering in my ear and lying upon me again.

I consider him to be my angel. He is with me in a different way as a beautiful light in my life.

I know that when I die someday, he will be right there waiting to guide me.

I will always miss the life he never had, but I treasure what I learned from him. He was a special gift. He has inspired me to do many things that I would never have done if he hadn’t shined his light upon me.

I sense that he cries when I cry. He wants me to heal and find joy in life. In fact, the encouragement I feel from his loving presence has healed me more than anything else.

I pray that one day, you will feel AJ again close by in this way.

Every moment of my life, I am grateful for my healing. I never take for granted how far I have traveled from the hell where my grief began.

And Jason has been with me every step of the way shining his light. 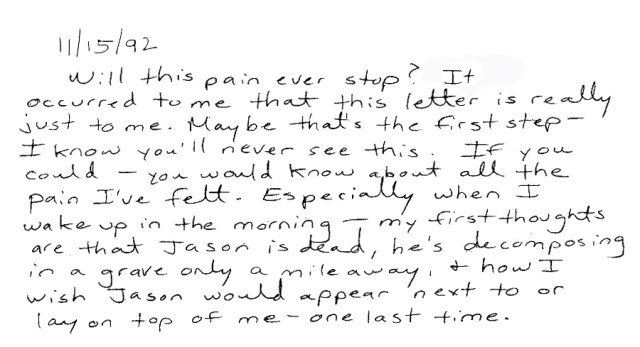 © 2014 by Judy Unger and http://www.myjourneysinsight.com. Unauthorized use and/or duplication of this material without express and written permission from this blog’s author and/or owner is strictly prohibited. Excerpts and links may be used, provided that full and clear credit is given to Judy Unger with appropriate and specific direction to the original content.

I'm an illustrator by profession. At this juncture in my life, I am pursuing my dream of writing and composing music. Every day of my life is precious!
View all posts by Judy →
This entry was posted in Healing and Hope and tagged acoustic guitar, angel in the sky, beautiful music, child's death, comforting music, compassionate friends, composing, creativity, death, death of a child, expressing feelings, Friendship, grief, grief and healing, grief bereavement "Loss of a Child", GRIEF RELATED, guitar, healing and grief, healing music, hope, hope for healing, hope of healing, inspiration, Judy Unger, loss, love, lovesong, lyric development, lyric writing, lyrics, Music, music and healing, musical comfort, my angel, My angel in the sky, optimism, original songs, performing, precious smile, singing, songwriting, sweet embrace, writing, You are my angel, You are my angel in the sky, You're my angel. Bookmark the permalink.

4 Responses to MY LOVELY LIGHT