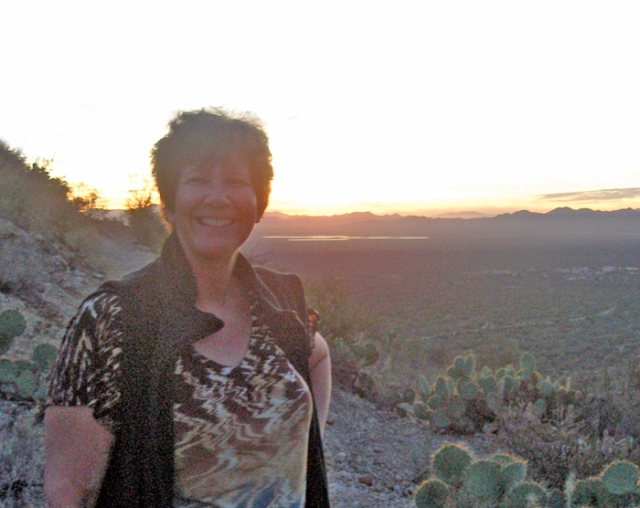 Not the best photo lighting, but my memories of racing up a mountain road to witness this beautiful sunset will always be with me.

I am blessed to be part of an amazing blogging community.

Tomorrow I will be leaving on a road trip to Yosemite with my good friend, Joni. I planned this trip in the middle of winter only because I wanted to meet up with Sandra Callahan who will be in California visiting from Georgia. I love Sandra’s blog and feel close to her because both of us have open and honest hearts when we write.

A link to Sandra’s blog: http://thedrsays.org/

Sandra recently published a book about how she has coped with her terminal heart condition. She asked me to read and review it. At the end of this post, I will share just a few of her beautiful words.

When two of my other far-away blog friends heard that I was going to actually meet Sandra, they both were envious and thrilled for me. I plan to share stories and pictures when I return.

Before I began lessons a year ago with Kimberly Haynes, I worked with Peaches Chrenko. I was a “musical baby” when I came to Peaches – I could barely sing and had only begun to play my guitar again after thirty years.

Last week, I visited Peaches in Tucson where she currently lives. We had never “hung out” together and this was my first solo vacation without a husband or children along to worry about.

Peaches is a very inspirational person and one day I will share more about her story. She moved away from Los Angeles at the same time that I separated back in September of 2012.

Her move was a result of wanting to escape the stress she was under in Los Angeles. As a single mother of three boys since they were babies, supporting herself solely as a musician had begun to take a toll. She also moved to Tucson in order to look after her mother who was coping with intense grief after the loss of her sister and husband within a one-month period.

In Tucson, Peaches began to heal and change her lifestyle. The migraine headaches, which had plagued her diminished.

A few days before my trip, I received an adorable text from Peaches. It was: “I’m looking at my mom thinking – why are YOU so excited, when she’s my friend? LOL!”

The trip was a helpful diversion for me since I was scheduled to go to court with my husband the day after I returned. I share below lots of pictures, because they capture more than my words could say.

Believe it or not, this is a makeshift burglar alarm. It took me two days to figure it out!

Eating chocolate and playing Scrabble was fantastic. For the three nights I was there, we played every night.

Between hysterical laughter there was a lot of competitiveness. Peaches and her mother, Adell were both excellent players.

In between those games, I hoped that some of my words helped to soothe Adell’s grief.

Those brown squares were awesome! (Not the ones with letters on them)

I did win the first two nights. On the last night, all three of us were taking our last turns and within 2 points of each other.

I looked over at her shining face and didn’t mind losing. I decided it was the perfect way to end our marathon.

Adell said, “I haven’t laughed or felt this great in a long time. Your visit has brought so much joy into our home and I’m really glad that you came. Thank you, Judy”

I felt the same way.

Three weeks ago, my 20-year-old daughter moved out to live on her own for the first time.

Every time I walked past her empty room, the reality that she was gone filled me with emotion. She begged me to leave her room “as is” for ten days until she gathered all her things. Whenever we spoke on the phone, she told me she was certain that she would not be coming back.

My thoughts jumped back and forth between feelings of success and failure. Success was my pride that my child left “the nest” to be independent. Failure meant she fled my apartment because she hated living with me and our relationship would be distant.

A few days before she moved, I was listening to my song “Set You Free.” I had distinctly written that song imagining that one of my children was leaving me. I really appreciated my song and my own lyrics spoke to me.

I opened up to share those feelings with my daughter on her moving day. Her response was:

“Mom, you wrote that for grandpa when he was dying. I’m not dead. Don’t think for one minute that it applies to me!”

When I returned, the following day in court was exhausting. For hours, I held all emotion in check as I sat at a table far away from my husband while our lawyers negotiated. Writing was the best outlet for my emotions and I stayed up late writing parables about a Princess and a Dragon.

For certain, I was sad about the coldness I projected during that day in court. Regardless of the circumstances, I had known my husband most of my life and did not want to let fear or guilt drive my actions.

I decided there were always opportunities for improvement. Most of my motivation was because I knew it certainly would be better for our children.

Ironically, the next day I had my opportunity.

My youngest son performed in the annual holiday show at his school. At 17, he was so tall and sweet-faced. It was beautiful watching him and I beamed with pride.

My husband also attended the show. The auditorium was crowded and I didn’t see him. After the show, I walked over to my son and hugged him before leaving. It would have been far easier to slip out the side door and go to my car before my husband saw me.

Instead, I walked over to him and shared how awkward I felt not speaking with him the day before. My husband joked and said that if we had talked our lawyers wouldn’t have liked it, which was probably true. He told me that his lawyer’s excuse for being late was due to the rain. Then he shook his head and wondered how that excuse held up when everyone else was on time despite the rain.

The ice was now broken and I could see my son was elated that we were all friendly to each other. Before I knew it, all three of us were having lunch together at a nearby restaurant. After lunch, my son asked his father if he would come into our coop/apartment so he could show his dad his room.

My husband hesitated. He used to visit me there when I was a young girl of 18. Over the last 30 years he had often fixed things for my parents when they were still living there. I knew this would be difficult for him, but our son continued pleading.

Softly, he told our son he would.

Both my son and I gave my husband a tour. My husband noticed immediately how different the apartment looked without the clutter from my father’s hoarding.

He noticed it was dim in my daughter’s room and replaced the light bulb for me. Soon, my other son would move into her vacated room.

I call this my “living messy room.”

My oldest son was at work, which was a huge change in his life after desperately job-searching for six months after his college graduation. He worked long hours at a nearby shopping mall where he held two part-time jobs that would end after the holidays. The disarray in my living room was obvious and my husband chuckled.

I share this picture of my kitchen counter when I returned from Tucson. My two sons could have done better.

After they left, I collapsed on my bed.

I definitely felt much better. I was so relieved that things had improved so much because of my own courage and inclination. Perhaps, now I could move on!

A second later I heard the front door opening. My daughter had arrived for a visit. I changed gears and gathered my energy.

First, my daughter and I went shopping for a few household items. Afterwards we ate dinner and sipped coffee at a nearby restaurant. Both of us were affectionate and open the entire time, and that was something I hadn’t experienced with her in a very long time. Usually we bickered and argued over everything. I felt genuine interest and caring from her and actually enjoyed our time together, which was rare.

After she left, I felt a glow inside and thanked God for the blessing of this incredible shift in my relationship with my daughter and soon-to-be ex-husband.

It had been such a wondrous day, filled with improvement in so many ways.

Perhaps this was the rainbow through my tears after all!–