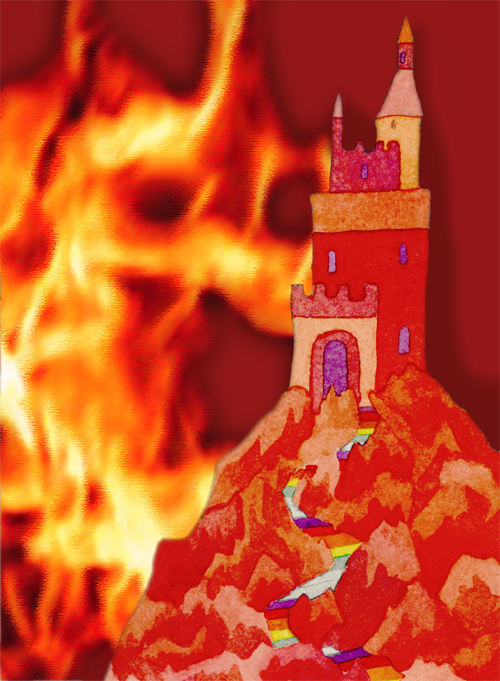 “The Dragon and the Princess”

The dragon was adjusting to his empty lair. He swept away some of the ashes.

He spent a lot of time wondering what had gone wrong. He loved the princess and had protected her as best he could. Now he was so angry with the princess. Why hadn’t she appreciated his devotion? He had spent so many years devoted to her.

The princess knew he was angry. It was familiar, because he was always unhappy and angry. But he had never been angry with her; he had quietly seethed with fury at life around him.

She still loved the dragon and was grateful for his devotion. His devotion had actually kept them together because she had always felt safe with him.

But now she could not live with him anymore. One day, it became clear to her that in order to live again, she was required to leave the safety of their castle. Not only would he no longer protect her, his anger would follow her.

She knew what had gone wrong even though he did not.

Although she was safe, her protective dragon was incapable of affection. Whenever she came near him, the fire of his breath burned her. His scales were so sharp, that she never moved close to him. So many times, she came close only to have sores and wounds. Eventually, she learned to be careful and developed thick armor to protect herself.

When she left the safety of the dragon, her armor became too heavy to continue wearing. But she was afraid to take it off. Even though she was not living with him, his anger invaded her heart.

She knew that, because at night the princess felt her wounded heart pulsating.

For such a long time, she had accepted her fate. She assumed it was ‘til death do you part. Her heart had shriveled and carried the scars from so many years of being wounded. But then she realized that long ago they had already parted when he became a dragon. And inside, her love for life had slowly died after that.

A long time ago, he was her prince. Perhaps he should not have married a princess. As a girl, she never imagined that someday she would be living with a dragon or that she would be a princess. All she had ever wanted was to be adored.

Now she suffered because she believed the wicked spell that had caused him to change into a dragon was her fault.

Clicking the blue link below plays my song in progress. I’m not sure of the title yet.

Even though I couldn’t stop singing in my car, my day wasn’t going well. I cursed because I had just lost a pair of my new eyeglasses. I felt so foolish. My father always admonished me to zip my purse and I could hear him scolding me. The glasses probably fell out somewhere in the parking lot.

Thank god, I had my new song to help me.

There was nothing that was going to bother me as long as I had this new song.

The arrangement was minimal and unfinished, but the magic was there. I could feel it. I listened to it over and over and each time the minor chords swept through my heart, it left me euphoric.

I entered the huge warehouse store where I had an optometry appointment. I was determined to find a way to help myself adjust to  new and different eyesight following my recent cataract surgery.

I was sheepish when I told the nice optometrist how I had lost my new pair of glasses while coming in from the parking lot. I didn’t even tell him how and he was still sympathetic. His name was John. He was running 45 minutes behind schedule and certainly could have made our appointment brief.

Instead, he allowed me to ramble on to him about how my music saved me. He listened carefully to my eyesight concerns and was very compassionate. My cheek was moist with tears when I left.

It was not only related to the contact lens he had fitted on one eye.

When I went to pay for the eye exam, the receptionist told me it was only $20. I thought she had made a mistake, but it turned out that John had given me a huge discount. I asked for a post-it note, and then I scribbled a thank you to that kind man.

After my appointment, I debated about shopping in the warehouse store. At home, there was already a huge pile of bills that overwhelmed me. Both my husband and I were waiting for our lawyers to come up with an agreement so I could start receiving child and spousal support. I was living on borrowed money. Our house was not yet listed for sale and there was little money left in the joint account.

The uncertainty was sometimes harder for me to bear than I admitted. The week before I had started biting my nails again.

I was determined that I wasn’t going to think about money anymore and decided to shop for a few things I needed.

My day was not going to be thrown by anything related to worry!

I paid for two additional pairs of glasses. One was to help me with up-close work and the other would replace the pair I lost.

I listened to my song as I danced through the store. I felt better and appreciated all the good things in my life, especially my music.

I came out to my car. That same morning, I had taken my car in to have the tires rotated. I was pleased how I accomplished so many important things.

I started my car, but it began to sputter in the parking lot. I let it idle while I made a quick phone call to a friend. I was hysterically laughing and crying as I told my friend that I was having a bad day. My car sounded awful and I wasn’t sure if it would drive.

I wondered what to do; there was definitely something wrong. I remembered there was an automotive center across the street and a block from this warehouse. I found my bravery and slowly moved into gear. I coasted through the parking lot.

My car chugged slowly into a lane of traffic. It died at the first stoplight. I started it up again and it shook – I gunned the engine and it inched forward.

When I reached the large intersection, I stayed calm. I restarted the car, but it died. Cars were honking me and I put on my hazard lights. I realized that I had to turn off the music now.

I started the car again when the light turned green and was able to get it to move through the intersection before it died again two more times.

I knew I could do it!

Finally, I coasted into the driveway where the auto center was and the car died in front of a mechanic.

I wasn’t far from my old home. I called my oldest son and I told him I needed him to come and pick me up. Only a few hours earlier before my optometry appointment, I had come into my old home to give him a big hug. I missed him so much!

He said to me, “Please mom! Don’t cry – everything will be fine.”

I hadn’t wanted to become emotional, but couldn’t help it. Leaving him had left a hole in my heart. When I separated from my husband, I also separated from my oldest son. He was a busy college student, but it was different when we lived together. I knew I could always go knock on his bedroom door and see him.

The automotive center said they could not fix my car because it was likely to be a transmission problem. Now I really had financial stress. My old minivan had 215,000 miles on it. This was not a great time for me to purchase another car.

I didn’t want to leave my car there. I debated about calling a tow truck and decided to have courage. My son followed me as I managed to get my car to sputter a few more blocks. I parked it outside our old home.

I was so glad my son could help me. I was relieved my husband wasn’t home. My son went to run and errand. After he came back he planned to take me back to my coop/apartment. We would be spending more time together.

I went into my daughter’s old bedroom and rested. There would be time later to figure out what to do. I listened to my song and closed my eyes.

I felt painful thoughts buzzing like a swarm of bees in my mind. My song delicately erased the noise. Gradually, I felt myself soothed and imagined I was floating upon beautiful clouds. Once again . . .

My music saved me. 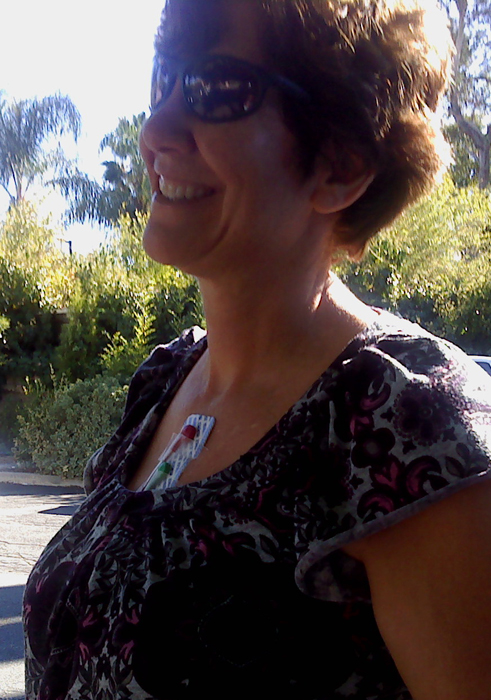 I am aware of how stress has ravaged my body. Perhaps when I was younger, my body had more ability to bounce back. But now, stress has left me with an irregular heartbeat. Today, I was given a 24-hour holter monitor to assess my heart. Within a week, I should know the result.

For sure, I don’t like the feeling where my heart feels offbeat. Instead, I am really trying to stay upbeat.

I cope best by singing and listening to music. Humor is another great tool that helps me to continue smiling, despite challenges.

I enjoy sharing photos from my younger and thinner days.

I just love those checkered pants!

Oh my god, another checkered outfit. I hated my hair fixed up like that, so I’m amazed that I’m smiling! 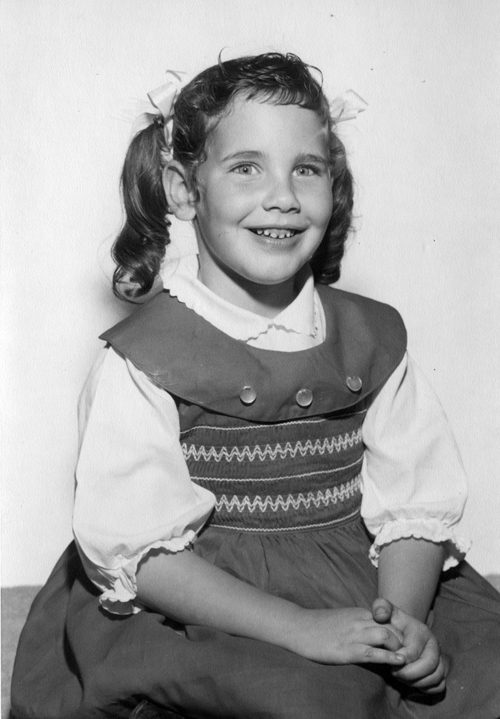 This is a reject photo. I think my hair needed to be re-combed. I hated being dressed up and no doubt my mother was mad that I messed up my hair within a few moments. It was probably because I was chasing a lizard.

I felt safe in this picture with my parents on either side of me.

I'm an illustrator by profession. At this juncture in my life, I am pursuing my dream of writing and composing music. Every day of my life is precious!
View all posts by Judy →
This entry was posted in Princess Stories and tagged acoustic guitar, car problems, child's death, composing, coping with divorce, creativity, Daily Life, death, death of a child, divorce, divorce after long marriage, divorce and separation, dragon, Friendship, grief, grief bereavement "Loss of a Child", guitar, impending divorce, inspiration, loss, lovesong, metaphors, mother daughter relationship, Music, original songs, parable, Princess and the Dragon, princess metaphors, separation, singing, songwriting, terminal illness, the princess and the dragon, writing. Bookmark the permalink.

3 Responses to MUSIC RESCUED MY SOUL