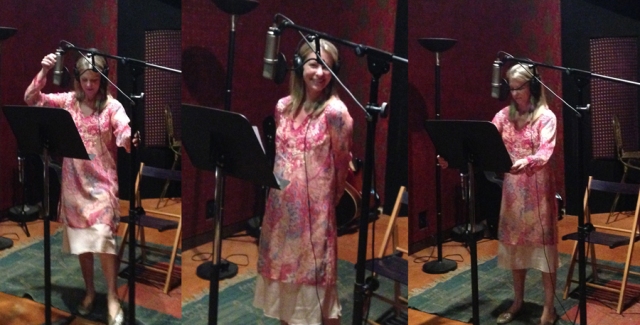 These pictures are of my voice teacher, Kimberly Haynes. She came to the studio where I record in North Hollywood to sing my song “Hang On” for me.

My post title is a line of lyrics from my song “Hang On.” Below are links to stories about that song:

Four years ago, I was a fifty-year-old woman who was very excited about having music again in my life. After not singing for thirty years, I enrolled in a private vocal coaching class at a public park.

My teacher’s name was Peaches Chrenko. I told her that the reason I was singing again was because I wanted to give my original songs the best voice I could. For most of my life, I did not consider myself a good singer. I imagined that one day a professional singer could do far more justice to my songs.

Peaches explained to me that there wasn’t any reason I couldn’t sing my songs. But I could still have others sing my songs because both were beautiful possibilities. I’ve never forgotten what she said.

It turned out that the more I sang, the more the connection within my heart blossomed. I soon realized that I loved singing.

A year later, I hired Peaches to record vocals for two of my songs for me. The experience was not what I had expected, though it wasn’t because she didn’t do a great job. It was just so hard for me to accept her different phrasing and melodies for my songs – it felt like it wasn’t my song anymore. Later on, I actually incorporated some of her ideas into my singing and really benefitted from her interpretations.

I have no illusions that my voice is going to lead me to commercial singing success.

My dedication to singing is completely driven by a desire to fully express my feelings. Singing is the one area of my life where I have felt free to do that. My songs heal me and I hope someday they will touch and comfort other people, too.

Last year, I was very excited about a new arrangement that George and I had created for my song “Hang On.” I was certain I had a hit in the making and began to entertain the possibility that another singer could really take my song much farther than I could.

At that time I was taking lessons with Kimberly Haynes, who is an amazing singer. I asked her if I could pay her to record a vocal for my song “Hang On.” Yet shortly before our recording session, her husband was diagnosed with cancer and so we postponed it indefinitely.

Two months ago, I received a call from Kimberly. She told me she was ready to sing “Hang On.” I was so thankful to hear her husband was doing better. His condition was still very serious, but he had stabilized.

A few days later, I eagerly went to Kimberly’s house with my guitar. I brought a sheet with the chords and lyrics, as well as a CD with a recording of “Hang On.” She told me she would be singing her own interpretation of my song. I was curious what she was going to do, but also nervous because it was difficult for me when Peaches sang my songs.

That day at her house, we went over the lyrics. Kimberly told me she was confused by one line and asked me to explain it to her. It was: “It’s not mine.”

I told her that in my song I was speaking to someone who was in horrific grief. Although I could somewhat empathize with their pain because of my own grief experience, I wasn’t saying, “I know how you feel.” I believe that no one can truly know how another person feels.

Also the pain not being mine was an acknowledgement that I have healed and moved beyond pain.

Kimberly said it was still confusing to her.

I had a few days until she would record at Darrin’s recording studio. I decided I would change those lines if I could find something I liked as much or better.

First, I came up with two rhymes: “unspoken” and “broken.” And then I was elated to find two replacement lines that worked well. They were: “Your eyes show, your heart is broken. There’s so much pain, it’s unspoken.”

The reason I chose the first three words of “your eyes show,” was because I believe that eyes truly portray grief. On a story I wrote in 2010 (The Amputation of My Soul), I described bereaved parents at support group meetings as having eyes with hollow sockets and no tears left to cry. 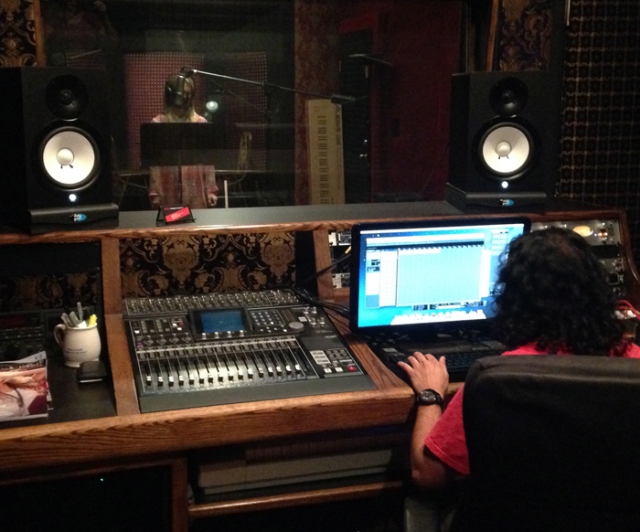 Darrin is on the right and Kimberly is on the other side of the glass.

The recording day arrived and I was nervous. I drove over to Darrin’s recording studio and Kimberly knocked on the door a few moments after. She was stunning in a long flowing gown, radiant and gorgeous. I asked Darrin to take a few pictures of us. 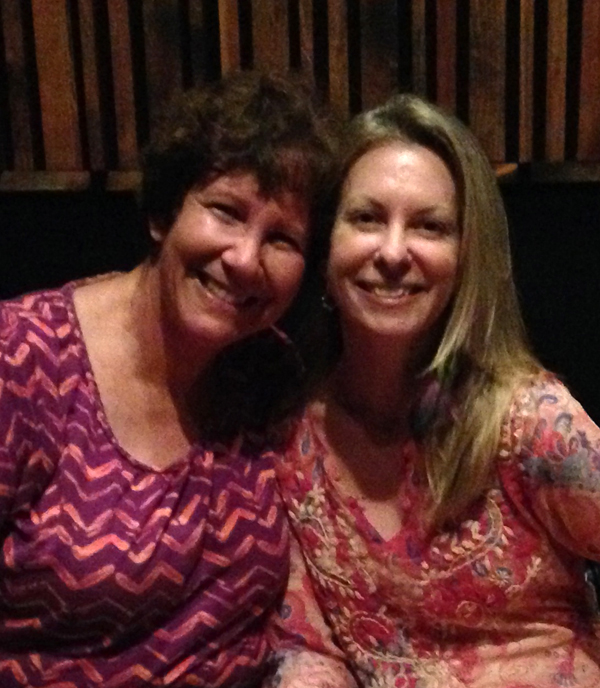 It was so different for me to be on the other side of the glass. This was the ultimate voice lesson because I was watching a true professional at work.

Kimberly checked the mic and Darrin did a test for levels. It was time to start recording and the beautiful arrangement playing aloud gave me chills as it usually did.

But from the moment Kimberly began singing, I felt myself squirming. Her delivery was so powerful, yet it wasn’t what I wanted for my song. At the end of the first take, I said something to the effect that it would be great if she could pull back a little.

Kimberly asked me to clarify what I meant. I told her I couldn’t really explain it and left it at that. My heart was pounding. I felt like I was being critical and certainly did not want to tell my voice teacher what to do.

She continued singing and did five takes. Her performance and delivery were strong, confident and very professional. No Melodyne or editing would be needed.

That was a huge contrast with my singing, by the way. So much of what I record is embarrassing; a lot of editing is needed. But when I’m done, I’m very proud.

When Kimberly was finished, it was very awkward for me because I wasn’t excited about her recording. I hugged and thanked her, but my face was on fire.

I felt like it was totally unreasonable for me to expect her to sing my song the same way I did.

I left the studio and went to my car. I took a few deep breaths and rested with my face in my hands. I wasn’t ready to drive home yet. Tears were pouring from my eyes uncontrollably. It wasn’t even because I was emotional – my eyes just hurt.

Suddenly, I heard a car honk and there was Kimberly in her car alongside mine. I lowered my window to hear her words. She leaned toward me and said sweetly, “Judy, thank you for sharing your baby with me. It was an honor. And I’m going to pray for you – for your eyes to feel better.”

I looked up at her and nodded. I let her know that I also prayed her husband would be okay. Here, her husband had ocular melanoma and she was praying for my eyes! 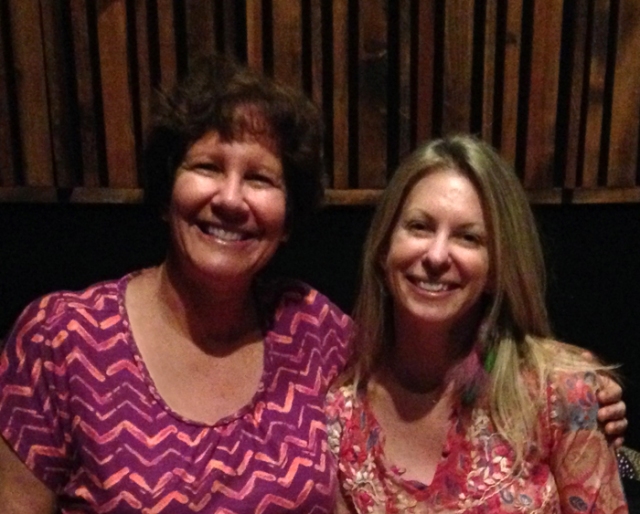 I decided not to promote my song with Kimberly’s vocal. Instead, I went back to George and we changed the key and tempo for “Hang On.” I sang new harmony for it and recorded my guitar into the song differently than I had before.

And just like with Peaches, I learned a lot about how to sing my song better just from hearing what Kimberly had done. 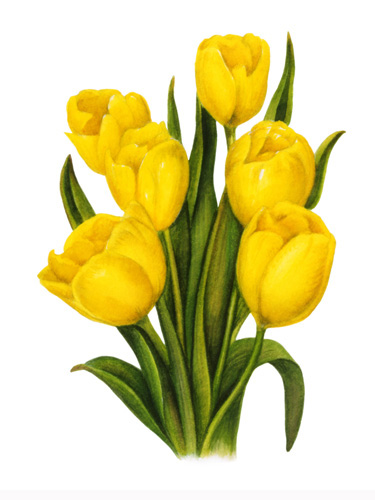 When I recorded a new vocal for “Hang On” a few weeks ago, I was extremely moved by my own lyrics.

Especially the line of: “One day your pain will go away – love will lift you up, love will always stay.”

My hopeful song was a message to me from my subconscious to hang on.

Singing “Hang On” was so healing! Of course, I wasn’t deeply disconnected from life like I was when Jason died. But I’ve been grieving my parents who both died in the last two years. I’ve also been struggling with depression related to my eye problems.

And then there was a revelation for me.

It all related to the lyric change I had done because of Kimberly’s suggestion.

I turned out that my eyes do show I am heartbroken.

And the pain was mine after all.

© 2014 Judy Unger and http://www.myjourneysinsight.com. Unauthorized use and/or duplication of this material without express and written permission from this blog’s author and/or owner is strictly prohibited. Excerpts and links may be used, provided that full and clear credit is given to Judy Unger with appropriate and specific direction to the original content.