A LOT ON MY SHOULDERS

Memories from a Yosemite Vacation. My brother and I were always fighting over the front seat. I always won, because I’d get carsick and throw up otherwise.

There is a sandwich shop near me. It is named “My Hero.” Quite often, I feel like I’m the “hero” sandwich.

Today I took my mother to get a second opinion from a shoulder specialist. I wanted to know whether it was necessary to remove screws that were put in when she had shoulder surgery a year ago. My mother had serious complications from that surgery and was on a respirator for two months. I did not want her to have any other procedures in a hospital.

When my mother broke her shoulder from a fall a year ago, I wanted a second opinion but was told that there wasn’t enough time. It was optimum to do surgery as soon as possible. My brother and my father felt very strongly about my mom having the surgery where the complications almost killed her. I agonized over that decision. I was on the fence, but they were not.

After several months of trying to find a specialist, I went ahead and found a shoulder specialist and set up an appointment. I needed to take my mom “over the hill” to get this second opinion regarding her shoulder and screw removal since there seemed to be no one in the nearby area.

Since my mom’s hospitalization, I had not taken her out of her nursing facility. I frequently used to take her to the movies, restaurants, and my home. This was a big deal for me. I decided I needed help. I was worried I’d hurt my back lifting her wheelchair, or getting her into my car. I finally learned to ask for help and my brother said he would come with me.

We arrived early for the appointment. Being early gave me lots of time to fill out forms. My mother asked me to take her to the bathroom. It was a very big deal.

I positioned her wheelchair and helped her to stand up. All of this was very difficult for both of us. I waited for her and helped her with her clothes and more. She was appreciative. She told me later that she was thrilled that she did all of this. Her independence meant a lot to her. Here was that role reversal again; it was very clear to me that we have switched.

As we waited for the doctor, my mother was very anxious. The doctor came in. He was very professional. My mother demonstrated her mobility. She could not raise her arm higher than her neck. He looked at the x-rays that we had brought with us that were taken three weeks earlier.

The doctor said that the procedure to remove the screws was fairly minor. However, it was very important that the bone was healed. He recommended another x-ray, which could be done right there that moment in his office. It sounded like a good idea.

The doctor returned. He said, “Based on the x-ray, your mom has severe arthritis in that shoulder. Removing the screws will not give her any more mobility or even less pain. If this were my mom, I’d skip this procedure. It really won’t have any benefit or pay off for her.”

At my request, he wrote a note for my mom’s physical therapist. It was the first time her physical therapist would have some instruction about how to work with my mother’s shoulder. This therapist has complained to me about not knowing how far she can push my mom.

The moment the doctor walked out, I asked my mom what she thought.

She said, “I don’t like this new doctor! He’s not competent at all. I want to schedule the screw removal from the first surgeon! I need to have hope for my future!”

I was baffled. After what my mother had gone through, I was relieved at the idea of not dealing with another hospital! Also, my mom had a sore on her toe that was deemed “non-healing.” It took a long time to improve. What if her shoulder became infected? She had poor immunity and required monthly gamma globulin infusions.

This was another one of those challenging medical decisions for me. Or was it hers? It should be; after all, it was her body. However, what if something happened? Was she of sound mind?

Here comes the metaphor of how I am feeling about making this decision. I am at an airport. The opinions and advice planes are landing. They are flying in non-stop. There is no more room on my brain’s landing strip. Which plane will I decide to fly out of here?

I haven’t even gotten to the landing strip yet! Now it was time to leave. During the drive back to my mother’s facility, she was very happy. My mother focused on how she stood up, sat in my car, and used the bathroom. I tried to feel positive, but it was hard to accept how much had changed from the way she used to be.

My brother dashed off. I was tired. I needed to take my mom back to her room. As I was pushing the wheelchair, I realized how nice it was earlier that my brother had helped me. I wished he had stayed to help take my mother to her room so I could have visited my father. However, he was in a hurry and had important things to take care of.

The wheelchair was portable, unwieldy, and very uncomfortable for my mother. I knew she couldn’t wait to get out of it. I decided to stop at the physical therapy room. I needed to tell the physical therapist the results of our appointment.

She could be the first advice plane on my brain’s landing strip.

She was not there. I figured I’d speak with her later on. I pushed my mom toward her room. There was a door-strip that made the wheelchair stop. I pushed harder; it didn’t work. I thought I’d turn the chair around and pull my mother backwards. I am such a competent wheelchair driver (I thought).

In one second, my mother shouted, “What are you doing?” Before I could answer, she slid out of the wheelchair. In one second, she was on the floor. I shouted, and my mom told me not to call anyone. It was too late. Two physical therapists that were nearby came running to help us. They quickly lifted my mom back into the wheelchair.

I was helpless and very sorry. My mom was extremely upset. She hadn’t wanted anyone to know she had fallen.

She believed she would be in trouble again.

I kept apologizing. She kept reassuring me she was fine. I wanted to run away somewhere. There must be a cave somewhere for this daughter bear. I decided I deserved a ticket and must attend wheelchair traffic school!

It was late afternoon when I got home. There were plenty of things waiting for me to do. I just needed to rest. Before I could do anything, my mother called. She was crying. She had wanted to rest, but had to get completely undressed for an examination because of her fall. It was standard procedure at the facility. It was degrading for her. I didn’t know what to say. I was so, so sorry.

The phone rang again. It was from my mom’s nursing facility. “Hi. Are you Shirley’s daughter? We needed to call you to let you know that she fell today. We have checked her and she has only a slight bruise.”

I will always remember my mother as a very devoted grandma.

Dinner was chaotic with all the noise. I wondered why we have a puppy, bird, and two cats. They have added so much extra stress to my life. I lived for a long time without pets.

In the midst of everything, the phone rang. I grabbed it in the kitchen. It was my mom again. She sounded better when she said, “Honey, today was the absolute best day of my life. I had both my daughter and my son together. I did things I didn’t know I was capable of!” I hung up the phone. The cascade of hot tears gushed down my cheeks. I couldn’t hold them back.

I had been furiously typing away. My mother called again. She was upset. She said, “Honey! They are punishing me! It’s a game. I’m not allowed to be alone in my room. They are blaming me for today’s fall. I have waited over an hour for a nurse to take me back to my room!”

I handed the phone over to my father nearby. I couldn’t handle any more stress. He listened as my mother cried and handed back the phone to me. He was now crying. He shouted at me, “You need to call the nurse’s station and take care of this!”

I am ashamed. I had a meltdown. I yelled, “I need to get rid of everything else that is adding stress to my life, then! Your care, as well as mom’s is stressing me! I was erupting and it was awful; but I couldn’t help it. Thank god tomorrow was another day!

My father certainly forgave me. But now I am sad that I caused him pain. Sharing my stress with him was not helpful. I have wondered if someday I’ll be an “open-faced sandwich.” Now that starts to feel like I’m wishing my parents were gone.

I was actually thinking it meant that my kids were more independent!

1. Call my mom’s doctor and see when the feeding tube can be removed.

2. Call the nursing supervisor to find out if they can find a more humane way that allows her to be alone. I know it prevents my mom from falling, but there are other ways to ensure her safety!

3. Buy a birthday card for my mother to give my brother. (She asked me three times today)

I can’t share details of my “upper sandwich” list: (my children). It is twice as long as the other lists, for sure!

1. Start painting one of my art jobs, and stop procrastinating. I could be illustrating, but I’d rather be writing.

2. Practice my guitar. Last week, I realized how I was quite out of practice after seeing my childhood friend, Steve. It is exciting to imagine how good I might become with practice and improvement! 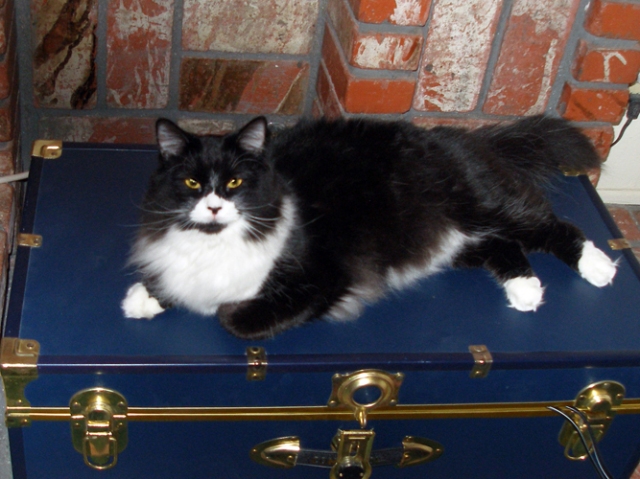 Our cat is looking at me saying, “Don’t even think about getting rid of me!”

I'm an illustrator by profession. At this juncture in my life, I am pursuing my dream of writing and composing music. Every day of my life is precious!
View all posts by Judy →
This entry was posted in Uncategorized and tagged "sandwich generation", Advocacy, Aging Parents, Caregiving, Daily Life, humor daily life, Ordinary Life, parenting, shoulder screw removal. Bookmark the permalink.