I REMEMBER SO WELL

I sing and write about the sad things I’ve experienced, but I also love to share my smile and hopefulness, too.

My post title is a line of lyrics from my song named, “It’s Not Forever.”

I finished my nut illustration assignment this past week.
The backgrounds are identical on both paintings; they were done for a seasonal package.

So much has happened to me in the last six years. In 2010, I celebrated my 50th birthday and at that time I was caring for my parents who were very ill. I was married to the only man I’d ever been with since I was 21. Our three children required a lot of my energy because there were many challenges related to them.

Today, I am divorced. My ex-husband lives far away in another country and both my parents died over two years ago. I’m close to all three of my adult children (my two sons live with me). I continue to support myself as an illustrator, while at the same time passionately working on music.

When I began my blog in 2010, I learned that sharing past trauma was very healing. It took several months before I found the courage to write in detail about the loss of my son, Jason who died in 1992.

After I wrote that story, I felt lighter and different. I was working with an excellent hypnotherapist and excitedly brought my story to our session. When I read it aloud to her, I could tell she was very moved. It was then when I realized that I wanted to write and speak more about my life.

Over the next few years, I compiled a book and even hired an editor to review my material. My plan was to record my book with my own voice. I’ve recorded it several times and my first version was over 10 hours long!

It was definitely a learning process for me. I never marketed any of it because I went through a lot of adjustment after my divorce. But whenever I shared my recordings with friends, I knew they were definitely touched.

In 2015, I pared my book down to two hours and recorded a much-improved version. Later on, I could record other books. 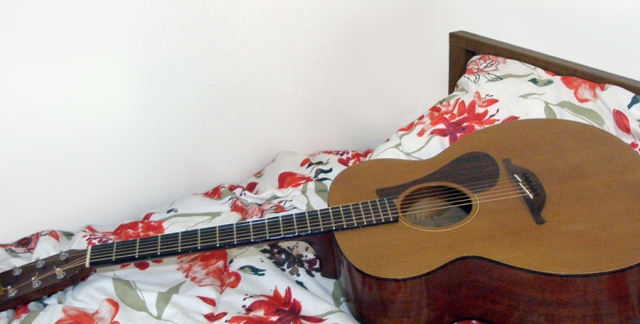 This is a recent picture of my guitar that I might use for the back of my audio book cover.

After working on my audiobook for six years, I’m excited that it will soon be finished.

Two weeks ago, the engineer who was mastering it for me wondered if I’d be interested in attending an audiobook workshop that was held at the recording studio where he worked. It was going to be led by a good friend of his named Arthur Insana.

Art was a highly successful audio director. His company was an industry leader in providing audio programming for publishers. (http://www.insanamedia.com)

Even though my book was already recorded, I signed up and looked forward to learning more about what I loved doing. I received an email with instructions; I needed to choose three stories from a list and come prepared to read them aloud.

It was twilight when I arrived and parked on a side street. The recording studio looked sleek and was in a large building. There were many recording booths, but the workshop was held in an impressive room with several rows of comfortable chairs. Through a large window I could see the recording area. There were six people who attended the workshop that night, as well an engineer who adjusted the microphone placement and handled the recordings.

Art introduced himself. He explained that his job was to direct voice actors; he was not a speaker himself and even had to overcome a speech impediment earlier in his life.

He asked everyone to say their name and why they were there. I said I wanted to learn more about recording audiobooks because I was an author. Then he answered a few questions.

Whenever Art spoke, his answers were articulate and helpful. Instead of delivering any kind of lecture, he preferred to give everyone the opportunity for as much time as possible recording in the sound booth.

I quickly noticed what a novice I was after hearing the other people speak. One man evoked Darth Vader because his booming voice was almost like James Earl Jones.

Another woman had a sultry voice that was very beautiful to listen to. Art was effusive and told her that her voice sounded just like many professionals he worked with. But he also told her that she spoke too fast. Despite repeated prompts to slow down, she was nervous and still spoke very quickly.

Listening to Art’s feedback was fascinating and constructive. He zeroed in on what a professional reader did and always found something positive to say.

When it was my turn, I was slightly nervous. I arranged the stories I had printed on the stand and chose a fiction one to read first. Art complimented me on my ability to read correctly and stopped me a few times to offer helpful advice. My inexperience was clear because I hadn’t prepared myself by knowing the story and had no idea how to create voices for different characters.

For my second turn, I thought I’d do better with a non-fiction story. I read the words carefully, but didn’t feel like a good storyteller because I found the material to be kind of boring. Right then and there, I realized I didn’t have the kind of focus or voice that was required to record audio books. But I was fine with that because I knew it was quite different when I read my own writing.

There was time for one last recording in the sound booth and I had an idea.

I asked Art if I could read some of my own book on my last turn and he said it was fine.

While I was waiting, I pulled up a story about the death of my son, Jason, on my iPhone. It was on my blog and wasn’t my actual audiobook script, but it was close enough. The story was about 45 minutes long and I had to choose a section to read that was ten minutes long.

I decided I would read the most emotional part.

Whenever I’ve recorded that story, vivid memories stabbed my heart and caused my voice to shake. On the current audiobook I was planning to release, I forced myself to detach when I recorded it. I didn’t want the listener to become distracted from my story if I sounded like I was crying. If I became emotional, I stopped, backtracked and recorded that part over.

I looked at my phone and waited for Art to give me the go ahead. I began to speak and my voice was shaking within one sentence. I wasn’t able to detach at all and was definitely a different speaker than earlier in the evening.

After what seemed like about ten minutes, I intuitively stopped reading and waited for feedback from Art.

He was very kind and compassionate. His first response was, “Wow, that was incredibly powerful.”

Then he gently asked me if my book held that much emotion throughout. I explained that it did not.

His advice was that emotional intensity was best to build upon, which I agreed with. He ended by saying he was so sorry for my loss. I gathered up my phone, stood up and came out of the sound booth.

The other five people in the room clapped as I sat down. I could see that I had moved them in those ten minutes. The woman who sat next to me squeezed my hand and said she was very sorry.

Click the blue link to hear my recording from the audiobook workshop (Warning – this is a very emotional performance):

Judy reading an excerpt of “Jason Mark, He Left his Mark”

My post title of: “I Remember So Well” applies to how clearly I remember grief. Reading Jason’s story and reliving such a traumatic experience might seem like something I would be better off avoiding.

I share my grief experience to promote understanding, not pity.

My voice carries the anguish that other grieving people might appreciate. Whenever I’ve released my feelings, whether through singing or speaking – I have found peacefulness and comfort.

I am certain I have healed from the grief that tortured me for decades.

Once I was lying on the ground. There were no stories I could write or songs to sing. I was in hell.

Now I am grateful for my ability to stand up, speak and smile.

On my last post, I shared a message from a woman who was very excited that I was mailing her some free CD’s (she had left some sweet comments on my Facebook music page last year). On her message, she mentioned she was going to be having surgery and my music would help her.

Well, we corresponded once she received my package and her messages gave me so much fuel and inspiration to continue this amazing journey I am on! 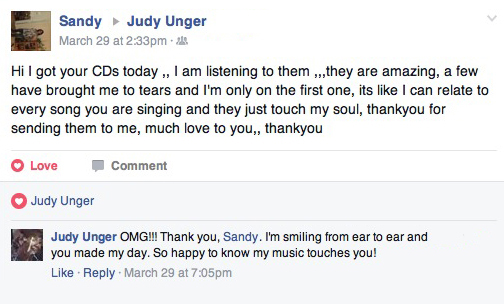 I'm an illustrator by profession. At this juncture in my life, I am pursuing my dream of writing and composing music. Every day of my life is precious!
View all posts by Judy →
This entry was posted in Healing and Hope and tagged Art Insana, Audiobook recording, death of a child, discouraged by grief, finding happiness after losing a child, healing from grief, healing music, hope, inspiration, It's Not Forever, loss, music and healing, overcoming grief, recording studio, songwriting. Bookmark the permalink.

7 Responses to I REMEMBER SO WELL