Link to performances, stories, lyrics and recordings: WITH ME

My post title is a line of lyrics from my original song, “With Me.” Above is a sheet where I scrawled out those lyrics. (I preferred through the darkness, rather than in the darkness). Recently, I sang a new vocal for my song and my beautiful words have “lifted me up” when I’ve been discouraged. I’ve noticed that darkness has been a powerful metaphor in my life for sadness and confusion. In one of my earliest songs “Beside Me Always” my lyrics go, I’ll search through shrouded darkness . . .

My eyes were hurting me. I kept blinking and although my eyes were watering with tears, they were incredibly dry.

I did not want to see. This caused me to remember a sentence I’d written before:

Our body exhibits what our mind does not allow.

I walked around feeling as if I were in a fog. My life was playing out something I had eerily witnessed as a dream many years before. Now it was like watching an old home movie. I knew every scene before it played because I had watched this show in my mind many years ago. 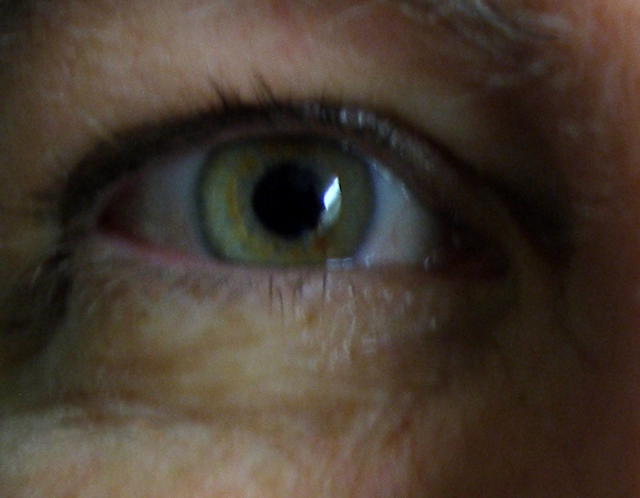 Within a week, my mother had deteriorated rapidly.

On Monday, Miriam called me crying because my mother never woke up during the six hours she was there.

I was having difficulty concentrating and tried to take care of myself. But my eyes were bothering me every moment of my day.

On Tuesday night, the jarring sound of the house phone ringing at 11 p.m. gave me chills. I was suffocated by guilt as my brain screamed, “Is she dead?”

It was her nursing home calling. I held my breath as they told me my mother had been running a fever and her oxygen would be increased. I was about to leave to go see her, but they told me they had brought her fever down and she was comfortable. The charge nurse said that a doctor would definitely see my mother the next day.

An ominous cloud surrounded me and dread began to seep through every pore in my body. 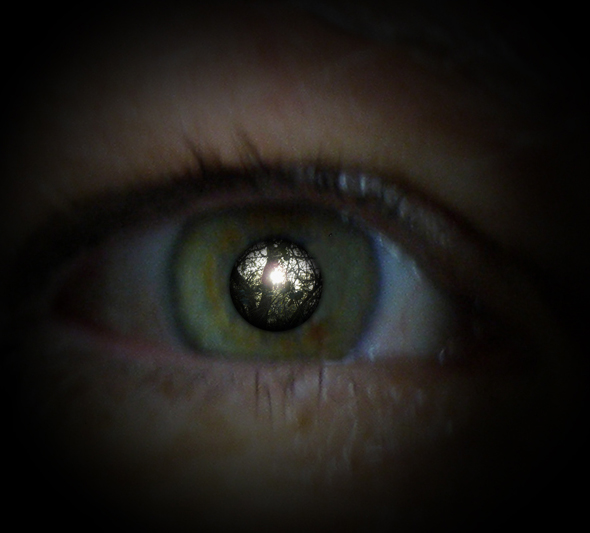 The next morning, I moved very slowly because I did not want to face what was waiting for me.

I walked into the nursing home and ached when I saw my mother. Her face was contorted and her brow was deeply furrowed as she gasped and moaned with every breath. I was heartsick and beside myself.

Miriam (my mother’s companion) mirrored my mother’s face. I gripped Miriam’s hand and told her, “I feel like I am dying with her!”

It was true. A piece of my soul was withering away.

By lunchtime, my head was pounding when the nursing home told me that a doctor had not come to check my mother as they had promised the night before. Instead a nurse practitioner (NP) was waiting to speak with me.

The NP told me that my mother had a serious lung disease. It was called “Interstitial Lung Disease.” It was the first time I was told this. This explained her need for oxygen and would lead to her death.

I couldn’t understand why the nursing home called me every other day to report a skin tear or bruise, but hadn’t told me something as crucial as that.

In addition, the NP said my mother had a blood test four months earlier that was a “marker” for tumors. My mom showed elevated levels indicating a possible cancer. The NP said that because my mother had also lost a significant amount of weight recently, it was likely that she was dying.

As I was given so much information that contradicted things I had been told previously, I found myself overwhelmed by anger and frustration

My mother never had congestive heart failure, after all. She did not have pneumonia and her heart was fine. She had interstitial lung disease.

All the while, I was struggling trying to decide whether to insist upon an IV antibiotic. This would be a last-ditch effort to give her a chance. But now her struggle was not simply an infection anymore according to this NP.

If I chose morphine instead, it would alleviate her suffering and hasten death. The NP made it clear to me that my mother was not going to improve.

I decided to demand morphine for my mother because she was suffering.

This picture is of my mother holding my father’s hand as he was dying.

The ticking in my mind was getting louder. I wanted to go home and crawl into bed. I wanted to close my eyes. I decided I had to take care of myself. I would go home and do just that. Miriam would stay with my mother.

I kissed my mother goodbye. She had an oxygen mask on and was in a fetal position on her bed. She was absolutely skeletal.

My head was spinning as I walked down the hall to leave the nursing home. I was imprisoned in a horror show.

I passed by half a dozen wheelchairs lined up. The frail bodies in them were all slumped over. Elderly men and women with their eyes were closed and mouths were open. They were simply waiting for their turn to die.

I wanted to run.

My head was screaming, “Get the hell out of here!”

I had practiced for this show many years earlier. Even though I had put everything into the dress rehearsal, suddenly I wasn’t prepared for “show time.”

The show was beginning as I stumbled out from the nursing home.

It would go on with or without me.

Was my mother treated differently because she had a no-hospitalization order?

It seemed to be that way. Certainly she could have been treated more aggressively and I had been left out of the loop. I hadn’t attended any recent care meetings and did not want to feel guilty about it. Those meetings were usually brief and more about the nursing home’s agenda. If there were a concern, I would address it whenever it happened rather than wait for one of those meetings.

When my mother broke her hip three years earlier, I was ready to let her die rather than have surgery. Even then, I never imagined I’d have to make so many decisions surrounding both of my parents’ life and death.

What made this situation so difficult was trying to follow her wishes. My father made it easier for me because he clearly told me what to do.

I knew my mother did not want to die because she always told me that. She was afraid of death.

I came home and wrote an email to my good friend, Dr. Sam telling him what the nurse practitioner had told me. He replied:

Judy, why is your mom struggling to breathe right now? What is the result of the chest x-ray?

I would try to speak with a doctor, if possible. I just don’t think that NPs should be providing care to patients who aren’t doing well. If she has pneumonia then she needs IV antibiotics and oxygen at the nursing home, assuming you don’t think she should be in the hospital.

It sounds as if the nursing home is trying to provide minimal treatment. At times that may be appropriate, but the timing of that decision really should be up to you and your brothers, not them. Sam

Sam, she’s 88 and it’s been such a hard journey to this place. Up until this point my mom has been deteriorating – losing weight and constantly coughing. Most of the time she slept and didn’t eat. She hardly could speak or say anything.

She is in bad shape Sam. If I thought something could turn this around – I would. But I think it would cause her to suffer far more. The NP said that my mom has regularly seen a pulmonologist and that they’ve been aware of this problem with her airway.

She’s receiving 4 liters of oxygen and constant breathing treatments are not helping. It’s so horrible to be this frustrated.

I am lost with this.

Perhaps I was lost and making this decision was agonizing.

As I drove home from the nursing home I listened to my songs. Each one had many lines of lyrics that touched my heart.

My song “With Me” was especially helpful. And it was hard to say goodbye. Letting go wasn’t easy, either. This was definitely about hanging on.

I wasn’t the kind of person who regularly prayed. Now I was praying that my mother would not suffer like my father did.

The unreality of what was happening was familiar. I heard that loud ticking of a clock in my head. My mother’s last minutes on earth were approaching and everything else began to grind to a halt for me. I couldn’t sing anymore and cancelled most appointments on my calendar.

There were funeral plans to think about.

But as I walked into my coop, I changed gears. My three children knew their grandmother was ill, and I tried to shield them from the horrors of it.

Jason died on October 6th and today was October 9th. It was my oldest son’s birthday. I did not want to spoil his day.

For six months, I had hardly seen him when I separated from my husband. I had missed him so much.

But now he was living with me all week and we were close again. His bed was a few feet from my computer.

Before I collapsed to rest I called Rosa, our former housekeeper. She was coming over to visit that evening and I asked her if she could pick up a cake to celebrate his birthday.

When I went to pick up my youngest son from school, we went together to a video game store so he could help me pick out something to give his brother on his 23rd birthday.

So on a day that held great sadness, I found reasons to smile. I was surrounded by all three of my children for dinner. Rosa cooked and the conversation was light and happy.

Although I had been carefully dieting for a month, my motivation slipped. I looked to find comfort from food again and eagerly ate the birthday cake Rosa had brought.

But then I had a flashback that was so vivid I was transported back in time again. My heart tore open to release a memory from long ago.

The last picture of Jason that I have. It was interesting that Jason insisted upon wearing sunglasses – he did not have any eye problems.

But I had a great idea; we could celebrate the birthday before Jason’s surgery on October 4th.

It was actually a really sad time for me; I had a terrible premonition about Jason’s surgery.

I contained my worry and put on a fake smile.

The pictures I took were the very last ones I would have of Jason.

As both boys clamored around a birthday cake, I was filled with ominous dread.

Now I felt the same way.

I was thrown into another memory. This time I was trying to get through Jason’s funeral. My mother was holding onto my arm and I clutched her tightly. My eyes were closed.

The memory faded into a vision of the future.

I was at a funeral and reaching for her.

But this time she was in the coffin.