LIFE AND DEATH ARE A MYSTERY

I have characterized my transformation from a year ago as one of going from being zombie-like to joyful.

However, recently I realized that it was not the only transformation I have ever experienced. As a result of grief, I was forever changed. I have never delved into describing those changes before.

In order to better convey loneliness and solitude, I projected myself into the experience of grief when I wrote the lyrics for “Alone.” This was despite the fact that I was not really exposed to death until I was older. When my grandmother died, I was more affected by seeing my mother’s deep grief than feeling my own grief over my grandmother’s death. My mother had tremendous fear about dying and never attended a funeral until she was in her 40’s. Somehow even though I was young, I felt like grief was something I could imagine and write about; it was part of life.

Later in my life, when I did experience grief, I was forever changed. The horror of grief slaughtered my innocence and enlightened me about death in a way that was far beyond what my lyrics imagined. I mourned the loss of my innocence for a long time, but with my healing I decided that I preferred my enlightenment.

I wrote my song “Alone” when I was young and unscathed. Not long after I healed, I wrote a story to express how experiencing grief changed me. 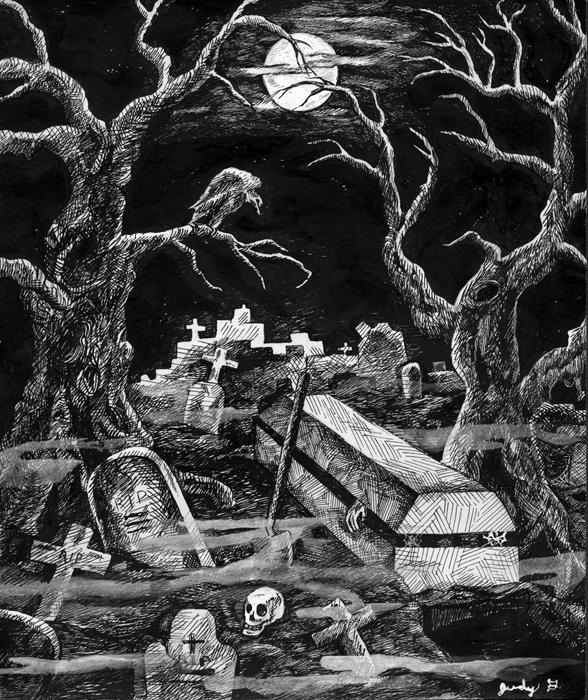 I drew this in high school. I imagined death as something “spooky” when I was younger.

She always felt like life and death were mysterious. She knew that every human could clearly see life and death if they looked carefully, but most people preferred not to. One day, she acquired special vision, and after that she saw everything differently.

In the past, life and death were ambiguous and intangible, but now she saw them both clearly. Even when she was innocent, she had always embraced seeing life. It was visible with the radiant beams that emitted from a person’s smile. She was especially familiar with eyes that danced and sparkled, like her youngest son. Eyes that sparkled also reminded her of her friend who had died. She realized that was something she had loved so much about her friend. It reminded her also of how much she missed her.

When she acquired her special vision, it was far more powerful than anything she had ever experienced. She desperately wanted to give it back. She wished she could go back to being the way she was before. She did not want to notice what was clearly before her. It was far too painful, because she had always avoided looking at death. Death was ugly.

At first, she was haunted by her special vision that allowed her to see death. Because she had seen her beloved child dead, she was in shock. His image in death filled her waking moments and her dreams. Because of that, she began to picture how other people she loved might look like dead. The image of her other children with open eyes and indigo lips caused her heart to pound and she felt as if it might even burst from the agony.

Then she became angry and was no longer afraid. Although she had experienced a horrible thing and felt as if she had also died, she knew there was a reason she was still alive despite her pain.

It was then when she developed her special vision. She didn’t know it at the time and she didn’t embrace it. But it was there. Now she collected every moment of life whenever she could. In her children’s eyes she especially could see life. The beauty of the world around her set an exquisite stage and she saw life everywhere she looked.

The day she had her realization, she went to visit both her elderly parents. She felt calm and peaceful. In the warm sunshine she sat next to her father. She expressed her love and asked him to share his memories so she could record them. He did.

She could not see the future and had no idea about it. But being with her father reminded her of death. His face was gaunt and as she looked at him, she felt like she could look through him. She pictured him as though he were a skeleton. Only moments before, she had the same feelings while looking at her mother, too.

Her father’s eyes were glazed; perhaps it was the drugs he now craved or his pain. He was detached and she realized her father was not really with her. It was then when she decided he was getting ready to go somewhere.

Her parents were not together. However, they were both leaving her at the same time.

Later on, as she went about her daily existence, she marveled that even though she might have seen impending death, the ugliness was no longer a horror for her. Instead she appreciated her special vision and was grateful and inspired about how much more she treasured her life.

I have a premonition that my dad is checking out. I plan to visit him tomorrow and bring my digital recorder. I never have gotten information that would be helpful for a eulogy for both him and my mom. I could be wrong, though. There’s no way of knowing.

On Wednesday, he will be having a picc line installed because it has become quite difficult for any IV’s to be inserted due to his collapsed veins. His catheter cannot come out and he will be having tests done to see why he cannot urinate on his own.

As far as getting information from him for a eulogy, this conversation we both planned on having is way overdue. It’s not about anticipating he’ll die very soon; it’s about letting him share his memories of childhood so that they can live on for him. He loves to talk about his army days, etc. He knows I want info for a eulogy, too, but it’s a reality that the day will come and of course, we don’t know when it will be. I could certainly say something general and bland, but I would love for him to give me some meaningful stories to share. I think that’s something that would lift his spirits and also it would be productive when we’re together.

But thanks for sharing your thoughts about this. Sadly, his situation has become this serious out of his own neglect for his health. He never addressed his prostate when it was a problem years ago. This last episode was caused by his stubborn refusal to consider that he was ill. I have no regrets that I didn’t force him into the hospital that night either. I have tried to be as respectful as possible of his wishes, while at the same time balancing my concern.

I had a sad visit with my father today. His eyes were hazy from Vicodin and he was very short tempered. He was gaunt and skeletal and it was hard for me to see him that way. I allowed my father to speak to me about his life and I brought a digital recorder with me today. It was very good as I recorded many of his memories. I wish I had also done that sooner with my mother, but it is too late now.

If my kids ever show up with a digital recorder and want to record my memories…I’m running away…and finding a new doctor!! …Sam

Your message has me cracking up! I’m such a procrastinator, so I’m proud of myself. I have wanted to do this for years. My dad might live until he’s 100, how do I know when he’ll depart? It’s just a good idea to be prepared. As I write this I realize I’m a little hypocritical. I haven’t gotten around to writing anything for myself, like a will. I’d better get to that one of these days!

I wish he had a new doctor, though, like you! J

Ps. Don’t worry; our kids might never want to hear about our memories. Mine sure don’t. Oh yeah, they can just look up my blog if they ever “wonder!”

This picture shows my brother and father “horsing around.” I wonder what I was screaming about!

I'm an illustrator by profession. At this juncture in my life, I am pursuing my dream of writing and composing music. Every day of my life is precious!
View all posts by Judy →
This entry was posted in Uncategorized and tagged "sandwich generation", Aging Parents, Caregiving, composing, creativity, Daily Life, death, death of a child, father's illness, grief, grief bereavement "Loss of a Child", GRIEF RELATED, inspiration, loss, lyric writing, Ordinary Life, writing. Bookmark the permalink.