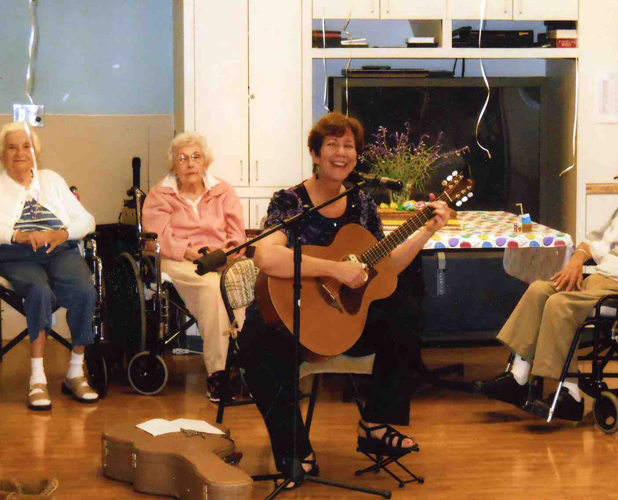 This photo was was taken a few weeks ago when I performed at my mom’s nursing facility. 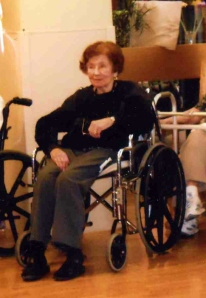 1. somebody who demands perfection in all things, especially their own work

2. somebody who believes in the doctrine of perfectionism

1. the quality of something that is as good or suitable as it can possibly be

2. the process of becoming or making something perfect; of reaching for

“Some perfect examples for my life”

This morning I felt like I had to look up those words above.

The reason was that I had been feeling that “perfectionism” might be holding me back from “committing” to creating a CD of my music.

It was interesting for me to see where I fell in with this definition. I most definitely wanted my music to be as good as I good possibly make it!

Yes, then I am a perfectionist! But my “highest attainable standard” is to do the best that I am capable of – not to try to achieve something another singer could do (and probably a lot easier than it would be for me!).

With my rapid improvement over this year, I realize that I have no idea how far I could continue to improve. Currently, I am aware of what I am capable of vocally (or not), and I certainly realize I will never be a Streisand!

I’ve learned so many lessons as an illustrator. Doing my best was all I could ever do, and in some cases it wasn’t enough for certain clients. However, if I knew I “gave it my all” I was satisfied with myself! 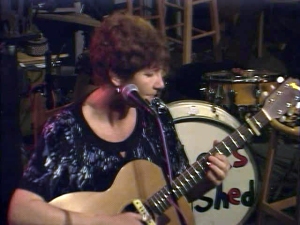 I performed my most recent song at Kulak’s Woodshed on Monday night. As always, I liked to introduce myself and/or my songs with a very brief statement.

When I took a “performance workshop,” I was told never to talk about a song – it was better to “let the song tell the story.” However, it was important for me to share my revelation that my song held meaning for me beyond how I originally wrote it.

My introductions are usually “unscripted,” and I was surprised that I actually mentioned I was a bereaved parent and my song was “for my son that died.” As soon as I said that, I became apologetic and added the line, “It just happened!” That was my way of explaining unfortunate circumstances that changed my life – as it is for most tragedies that happen.

When I perform this song again, I plant to introduce it differently without adding such a “sad” association.

I like my songs to be relatable. This song was originally written about a young girl and her lover. Even though I could relate this to “my child that was gone,” anyone could also consider this song to be about their child that has grown up and is “now gone” in that way.

Before I recorded this song, I shared my lyrics with my friends. I have found the advice I’ve received back to be very helpful.

My newly, rediscovered friend, Carol, is a neurobiologist – and she had great insight. Here was what she suggested:

Because I was forgetful, I did revert to “once was a living thing” on my first chorus while performing my song. However, I remembered the second time! I will probably play this song again, because this was not my best performance.

George pointed out the three words in my song he disliked:

I decided to replace “wasteland” with “dune like.” I still haven’t adjusted to that change! I might change it back.

Lately, I haven’t felt like writing because I’ve been spending so much time reliving my life as I edit my blog back from the beginning. It has been very time-consuming!

I want all of my posts to be “meaningful,” so I’ve been deleting a lot of the ordinary, daily “drivel” (That means I’ll probably delete this post later on).

However, at the moment it is fun for me to share my passion!

When I recorded my song, Alabaster Seashell, with George this past Sunday – it was another one of those incredible experiences with a musical genius. He did not say anything negative to me about my vocal performance. George was crazy about my song.

His arrangement was exquisite as usual, and I was quite excited about it. I always share my song immediately with my childhood friend, Steve. He usually creates Protools “mixes” for me with different enhancements. It has been a lot of fun sharing with him.

He has spent a lot of his time helping me! I was anxious to hear what he thought about George’s arrangement of my newest song. Here was his message:

I did listen to the new recording. The vocal performance didn’t sound very strong; maybe it’s just too high. Perhaps you could try to record it at home sometime using the Shure microphone and recording along with George’s arrangement and I could take that performance and put it together with George’s pro tools recording. Or if you have another appointment with George you could try it again. Thought the mix was a little muddy, wasn’t quite sure what was going on, I’d hear some guitar here and then something else covering it, and it would come up again. What did others think of it? (Not the ones who only say positive comments for every single song).

If you went to Kulak’s, hope that went well.

I did laugh at his line about “Not the ones who only say positive comments.” That would probably be his mother he was referring to!

Later on, I sent this message to my friends:

I think this performance at Kulaks is okay to share – however, I wish I didn’t make all those “clicking noises” with my finger pick! Glad I could share with my friends.

I would never have even noticed them if you didn’t point them out…so funny how we can be so critical of our own performances…your eye contact with the audience was terrific..that I noticed…I don’t think you looked at the guitar once!

There was a lot of clicking, which was almost better than just a little as it kinda added a rhythmic element to the sound, especially in one place where some people might have thought it was intentional. I did notice the eye contact was good.

When I went to my voice lesson this week, all of this was on my mind.

Clicking the blue links below play audio from my recent voice lessons with Peaches Chrenko:

Regarding perfectionism, I’ve decided that it would be detrimental for me only if it led to “paralysis.”

That has not happened for me. Striving to do my best has actually allowed for me to improve in every area of my life. It is a process.

Is it achievable? That would be the question that might carry the negative connotation. It is not. That is why the process of improvement is something that I will continue for the rest of my life.

As a human, it is impossible to reach perfection; it is unattainable.

Perfectionism can fuel growth, or cause discouragement.

Up until this morning, I was apologetic and embarrassed by my perfectionism. However, I prefer to look at it in a positive way.

Now I truly understand what it’s about. 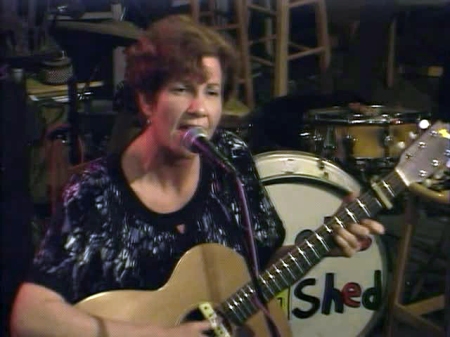 I will end this post with an exchange of puns that I enjoy. (Sam’s puns are in brown.)

As far as those clicking noises go, well, don’t fret about it!…Sam

Let’s not get started with guitar puns – (and by the way, I love ones that use fret in it!)

I know better than to challenge you to guitar puns…that’s a bridge I won’t cross!

You know you have to pick your battles. I’m really not that adverse to guitar puns. Of chorus, I’ve never had anyone to tell guitar puns to – so these are all new. You’re strumone I never dreamed I’d find.

Regarding the seagull noises added to “The Alabaster Seashell Song,” I know I won the last round with “Ugully.” Therefore, I’m definitely “out of tuna!”

We’re tune of a kind!  Sorry if these are any treble…don’t mean to be off bass!

Well Sam, if we’re tune of a kind – is that on a scale of one to ten? That’s a double pun – fish and music!

Of course, you did a double pun with bass!

Now this is getting weird. I’ve had a pun exchange with my “ex-boyfriend,” Sam. My old friend, Carol, who was once engaged to Sam is now joining in:

garding your PUNishing exchange with Sam at the end of #215, I have to ask you–I know Sam is a good sounding board, but do really think it’s fair to string him along this way? 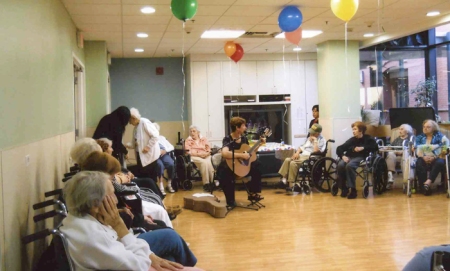 I'm an illustrator by profession. At this juncture in my life, I am pursuing my dream of writing and composing music. Every day of my life is precious!
View all posts by Judy →
This entry was posted in Uncategorized and tagged "sandwich generation", acoustic guitar, Aging Parents, composing, creativity, lyric development, lyric writing, lyrics, Ordinary Life, original songs, parenting, performing, puns, singing, songwriting, voice lessons. Bookmark the permalink.