IF YOU SHOULD SEE ME 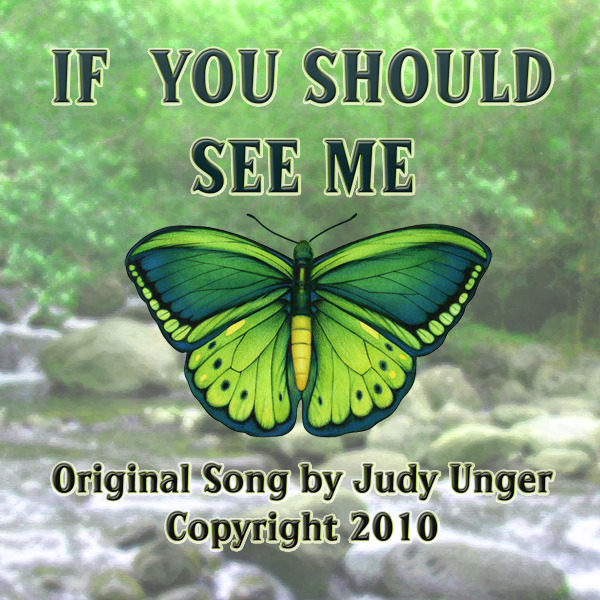 Lately, balancing my ordinary life with my ambitions has been challenging. I am writing for two blogs, performing, perfecting songs, and recording them.

It is also not a simple thing to record a song. Quite often, I need to reconstruct my song’s format; sometimes I change lyrics or chords around. Before going to see George to record my song, I must be certain of those things.

My “Journey’s Insight” has unfolded with the stories behind my songs. Perhaps I was supposed to end with my wedding song, which was my last musical composition. However, it seems that it wasn’t meant to be. I’ve rediscovered more songs that are worthy of recording. I have been practicing them for a few weeks.

I am amazed at how my blog has grown so large. I enjoy writing and sharing, so I plan to continue. Also, lately my journey has become very interesting for me!

Originally, the song “If You Should See Me,” was one that I probably wrote when I was separated from Michael. However, I am not sure, and it’s quite possible it was written for Sam.

I experienced a lot of indecision when I was trying to decide whom I would marry!

It was interesting to record a song that addressed my memories of indecision during my time with Sam. I was very torn and conflicted; I like the idea of singing this song now with all my insight!

I still have eight more song sheets to draw from if I choose to. I don’t remember the melodies to most of these songs, however, I like some of the chord progressions.

My heart has been aching lately with all the poignant feelings from remembering my youth. I might actually be able to write a new song at some point. Just thinking about that is very exciting for me!

Today, when I went to George’s studio to finish my arrangement of this song, I told him I felt a little sad that I only had one song left that was ready to record.

George told me he had been thinking about my songwriting and wanted to share some thoughts he had about that.

He said, “Jude, I have a theory. My feeling is that the best word to describe what you’ve been doing with your song recording is purging. You are purging out everything in order to have a clean slate to begin new stuff. Once you’re empty, I think you’re going to be coming out with some new things!”

I told George – writing a song was a lot of contemplation and hard work. I hadn’t really composed any serious music in a long time!

I said, “George, there’s no way I’m coming to you with a new song weekly! Don’t expect me to just pop one out every week!”

To which George replied, “Jude, I disagree. I think you’ll be popping out songs in a day!”

I grinned in amazement at the thought. My next, upcoming song has been sounding very nice for me. I’m looking forward to hearing a beautiful arrangement, which I’m certain George will create for it.

IF YOU SHOULD SEE ME

Wading through marshes in my mind

searching for nothing, I was so blind

But if you should see me

you’d think I would rather

be out somewhere looking for more

but if you should see me

what would it matter?

‘cause I’ve had all my chances before

Fading through passages of my life

feeling regret for being unkind

Facing tomorrow, what will I find?

Sometimes I’ve wondered, what is my fate?

Facing tomorrow, what will I find?

I tend to close my eyes a lot when I sing. I try to remember not to, but it’s hard.

This week truly reminded me that I was on a journey. I felt like I had traveled so very far in my life from the time when I was a teenager. There were many different paths I could have taken. How did I know which ones to follow to get to the place where I am now?

I didn’t find my insight until this morning. With clarity comes peace. I am appreciative and grateful for my clarity!

When I was younger and making those enormous “life choices” regarding a husband and career, I was filled with uncertainty and doubt. It was interesting this week to record my song that spoke exactly to that subject!

However, I am grateful that I followed my intuition, despite the immaturity of youth, which certainly made things more complicated.

An old Halloween memory. Jason loved trick or treating, but was unable to eat candy without vomiting after.

This week, I briefly did wonder what my life might have been like had I married Sam, my former boyfriend. I think that was a natural thought process.

As I read and wrote pages and pages to and from both Carol and Sam this week, my confusion eventually turned into clarity. Carol wrote out the reasons for them not getting married. It was much more about her youth and uncertainty, than about anything he had done.

Both Carol and I had some striking similarities, because our mothers influenced us greatly in making our decisions. She had no regrets.

The part that was truly important for me, was reading her realization of following her intuition on her life’s journey.

Marriage is challenging. However, I love my husband and although there are times that I long for the romantic love of my youth, I celebrate how fortunate it was that I chose someone who has been completely supportive of my journey. When it started out as an artistic journey, he was there for me, too. Now if only he would be less grouchy after work! However, after I feed him a “snack,” he’s much better!

What has been most beautiful for me this week was that I have reconnected and added two more friends into my life.

There is always a place in my life for caring, good friends!

This past Saturday, it was a beautiful morning. As I drove to see my hypnotherapist, Connie, I marveled at the amazing and dramatic sky that morning. There were intense colors and textures everywhere I looked, but I needed to keep my eyes on the freeway.

I walked through the garden toward her guesthouse. I felt so alive as I inhaled the exquisite fragrance of flowers around me.

After perhaps two years of working with her, I decided I was finally ready.

I left the session feeling calm. The tearstains on my cheeks were still damp, but my heart was light. While under hypnosis, I was finally able to say all the things that were deeply buried inside of me for over thirty years. I told my mother how I felt about her insistence that I marry when I did.

My transformation was complete. I had left behind the person I used to be since the age of 21. My different voice, personality, and thoughts had me feeling as if I had entered a time machine. I felt as young as I did when I was twenty, but I carried all of the wisdom and insight from my journey of the last thirty-one years.

I was indescribably happy.

I'm an illustrator by profession. At this juncture in my life, I am pursuing my dream of writing and composing music. Every day of my life is precious!
View all posts by Judy →
This entry was posted in Uncategorized and tagged acoustic guitar, childhood friendship, composing, creativity, Daily Life, Friendship, guitar, Halloween and grief, Hypnotherapy, lovesongs, lyric writing, lyrics, Music, original songs, singing, songwriting, voice lessons, writing. Bookmark the permalink.