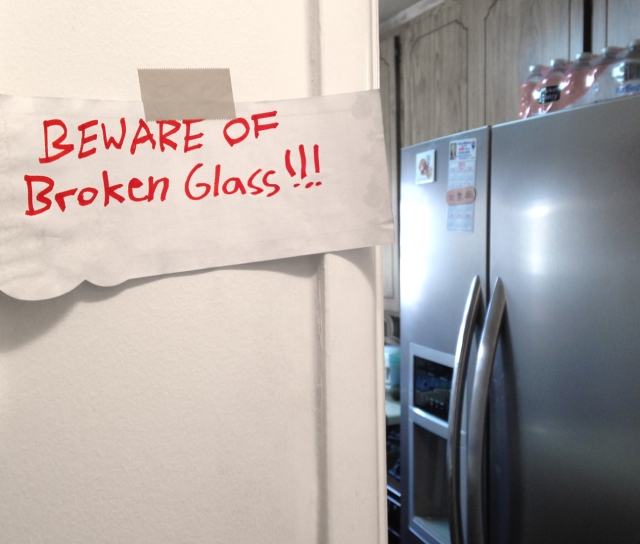 I share my “castle” with my two sons. I’m glad my youngest son put up this sign after breaking a jar, but he could have done a better job sweeping up the glass.

At the age of 54, I am navigating a new life as a single woman.

I live in the same two-bedroom coop where I grew up and both of my parents passed away in the last few years. I moved here shortly after I separated from my husband in 2012. I was married for 31 years and my divorce only became final a few months ago.

At one point, all three of my children lived with me. There were definitely challenges having one bathroom, which was something I dealt with when I was growing up. For my children it was a little more challenging since their former home had four bathrooms.

My two sons who live with me are 17 and 23. My 20-year-old daughter moved out to live with friends six months ago and thankfully, we are still very close.

It was a huge adjustment for my children when I separated from my former husband. Now that two years have passed, I’ve seen a lot of progress toward healing for them. But occasionally there have been setbacks and difficult moments.

Anger was an emotion that was taboo for me – in my marriage and while growing up. Sometimes, I’ve felt underlying anger from my children because I hurt their father. All of this has been painful.

With my divorce, I was the “perpetrator” and my husband was the “victim.” I carry guilt because I knew my husband had no idea that I would end our marriage after so many years.

My children are not interested in much of what I’m doing and as far as I can tell, that’s pretty typical of kids their age. Yet many times my children have expressed that they hate my music and writing because it caused me to leave their father.

And if my children knew that I called myself a Princess and their father a Dragon – it might upset them even more! 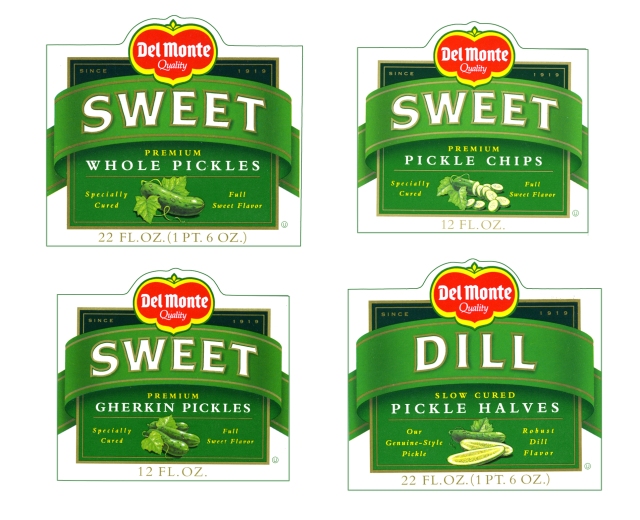 My illustrations adorn all of the Del Monte pickle jars. I’m only sharing this because my son broke a jar of them in the kitchen.

I’ve tried to be the “Queen of the Castle” where I am.

A few months ago when I felt overwhelmed, I encouraged my youngest son to spend time with his father over the summer break. With both my sons gone now on a three-week trip, I am a Queen on vacation!

There aren’t any crumbs and messes for me to complain to them about. The toilet seat hasn’t been left up. And the best part is not hearing the cacophonous sound of shooting from their video game system.

But I do miss their smiles and sweet love. My sons are wonderful men – tall and strong. My youngest son is over 6′ tall so it’s hard for me consider him my baby anymore.

Since I’ve discontinued taking hormones, my emotions have calmed down. Having privacy and quiet time at home has also been like medicine for me; I feel very peaceful. I am determined not to allow my emotions to build up like they did a few months ago.

For this Princess post, I’ve decided to share a story about how I’m not an ordinary Princess because I don’t believe royalty has to kill cockroaches. 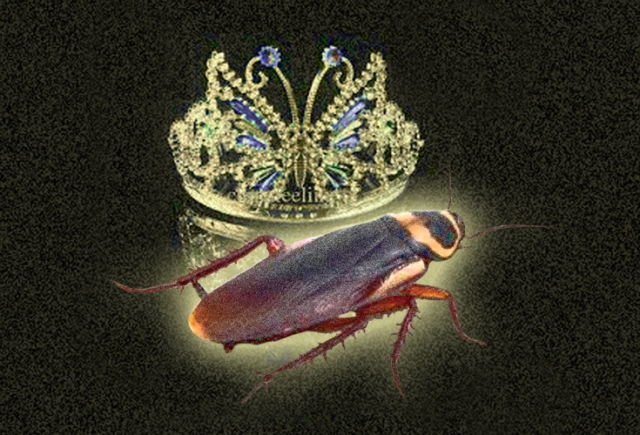 My roach story starts when I was home with my 17-year-old son about two weeks ago.

We had just finished dinner and he began yelling to me from his room. I was editing music and had my headphones on. It was so annoying and I wasn’t going to yell back. The Princess decided to ignore him unless he actually got up and came into my room.

But in the distance I could hear him still calling me. I slipped off my headphones and said in an exasperated voice, “Is this an emergency? I can’t hear what you’re saying and if you want me you’ll need to come to my room.”

I had just raised my voice and wished I had ignored him better. And because he continued calling me, I became even more irritated.

I probably was annoyed with him also because when I stood up, my foot hurt. It was because I stepped on a piece of glass in the kitchen earlier in the afternoon. He had dropped a jar of pickles before I came home and the house smelled like dill when I walked in.

This was not a castle for a Princess by any means!

I tromped down the hall to his room. “This had better be an emergency,” I announced as I came into his room.

My son was sweating and darting all around me. “Mom! You won’t believe this large cockroach I saw. Will you help find it and kill it?”

After lecturing him about true emergencies, I said, “No! I’m sure there’s plenty more where it came from. Deal with it!” My large son needed to grow up.

I walked out of his room and no sooner had I sat down at my computer, there he was again. I sighed.

He clearly wanted to be with me. I gave up trying to do anything – it was time for me to focus on him and for us to hang out together.

My son sprawled across my bed and told me all the reasons why roaches grossed him out. And the one he saw was so big that he couldn’t possibly go to sleep tonight. I listened to his fears and reassured him; the roach wasn’t going to hurt him.

As he talked, I was glad he had socks on. Sometimes, he brushed flakes of skin from his feet onto my bed.

Finally, he went out of my room and I put my headphones back on. My peacefulness lasted about five minutes. My door flew open. He was panting and begging me to come to his room to rescue him.

I was resigned as I followed him.

And there it was!

It’s antennae bobbed up and down. It was about 4 inches long and I’d never seen a roach that big. It was on the wall close to the ceiling. I wondered how I could kill that monster without squishing its guts everywhere.

My son was giddy with excitement to know that I was going to take care of it. After a moment of thought, I gave orders. I told him to bring me one of his big shoes and a broom. As he raced to bring me the items, I kept my eye on the roach.

When he handed me a light canvas shoe, I said, “Come on! I need a heavier one to smash it!”

Then I said, “Go get my cell phone and take a picture of this.”

He snapped a single picture of me. Later on, I wished there were some close-ups – but of course, that was risky because it might have zipped away.

I took a deep breath and lifted the broom. My son snapped, “Wait!” He pulled his bed away from the wall so I’d have more room.

I eyeballed the black insect and then swung my broom at it. It fell right off the wall and disappeared.

Who was I kidding? I knew those bugs were fast. Just as I was thinking how I wasn’t swift enough, I saw it on the floor flailing on it’s back.

I calmly took my son’s big shoe and smashed it.

My son began dancing with relief. It was worth everything to see his face.“

Did you see how big it was? I wasn’t exaggerating, was I?” he shouted.

I smiled and told him to get me a paper towel. As I wiped up the bug, my son confessed that the worst part about killing bugs for him was the spurting sound they made when they were squished. I was so proud that I killed it and the wall was still clean.

I dropped the roach’s remains into the toilet and flushed. I made sure the lid was down in case it clawed its way out. That had actually happened to me once before with a roach I thought was dead. Remembering it was enough to give me nightmares!

I was so glad I gave my son the attention he demanded that night. We bonded over this.

I was definitely a hero and not an ordinary Princess! 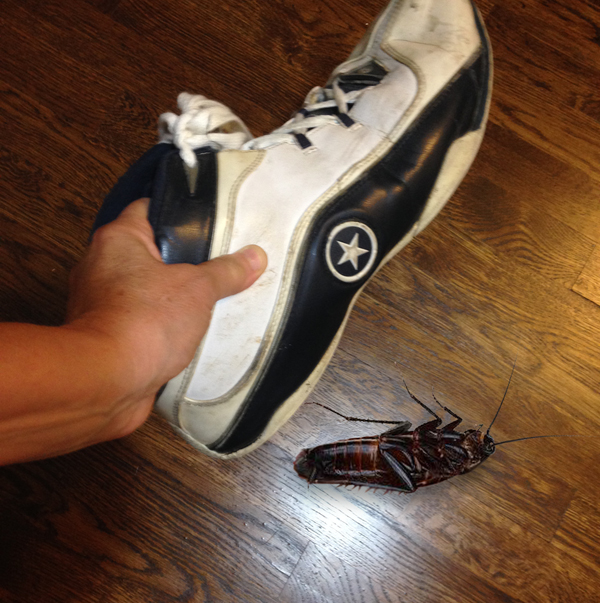 Be assured – this is a Photoshop re-enactment!

Well it turned out that this story has an even better ending than the one of me simply killing a roach.

The next day, my son came home from school and said, “Mom, you’re not going to believe what happened in one of my classes today.”

I listened and tried to keep a straight face when he told me there was a cockroach on the wall in his classroom. It turned out that his teacher was also afraid of roaches. And it was a male teacher, which I found humorous.

My son said, “He went out of the room because it bothered him so much.”

I asked, “So then what happened?”

My son beamed and said, “I saved the day.”

I grinned and replied, “Really? What did you do?”

He said, “Oh, mom! It was so easy – I just took my shoe off and got a broom to knock it off the wall. Then I smashed it, picked it up with a paper towel and threw it away.”

I could hardly believe it.

This was just one of those sweet parental moments – when you realize how much your child has truly learned from you! 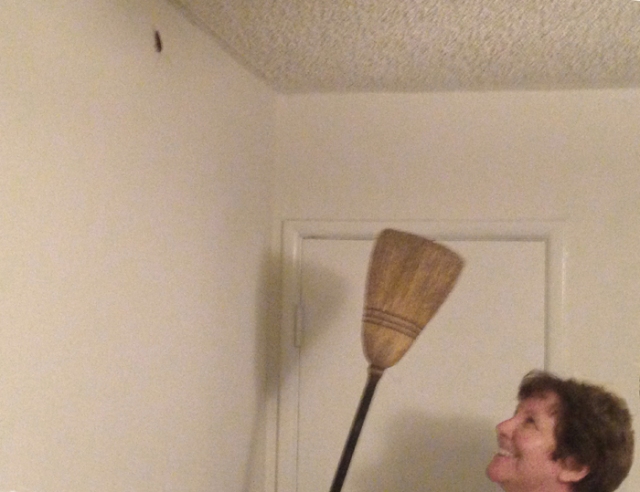 There’s something about me holding a broom that is reminiscent of a witch. But I’ll save that thought for the next story.

© 2014 Judy Unger and http://www.myjourneysinsight.com. Unauthorized use and/or duplication of this material without express and written permission from this blog’s author and/or owner is strictly prohibited. Excerpts and links may be used, provided that full and clear credit is given to Judy Unger with appropriate and specific direction to the original content.

I'm an illustrator by profession. At this juncture in my life, I am pursuing my dream of writing and composing music. Every day of my life is precious!
View all posts by Judy →
This entry was posted in Princess Stories and tagged adjusting to divorce, cockroach, Cockroach drama, creativity, Del Monte pickles, divorce after a long marriage, gray divorce, Humor, humor daily life, Judy Unger, killing a cockroach, my son and I, older children and divorce, Ordinary Life, Princess story, recording music, roach, writing. Bookmark the permalink.

1 Response to NO ORDINARY PRINCESS – PART 3