MY TEARS I HIDE

The princess considered her music a “magical elixir.” It swirled around her like a soft blanket of comfort; it was indeed enchanting the way it soothed her soul.

Music was her true companion; it was such a special friend. Sometimes, she even envisioned a musical fairy dancing around her. The fairy’s name was Melody and God had sent this beautiful fairy to help her.

Melody was very attached to the princess and thankful that she could ease all of the princess’s sorrow. One day, God told Melody that the princess would face even more challenges. Melody wept because she wasn’t sure the princess could overcome sadness anymore.

For the past month, Melody had stayed close to the princess. She was so relieved that the princess was slowly lifting herself off the ground. Most of the time, the princess stayed positive and treasured the many wonderful aspects of her new life.

She did not miss the dragon and soon he would be leaving their castle. Their castle held many memories; sad ones, as well as happy ones. Now the castle had sold, and the princess realized that she never even bid it farewell.

It was too much for her to think about. For the moment, she decided that she far preferred her tiny cottage; to her it was paradise. She did have smaller dragons to deal with. At times it made her crazy, but she maintained her sense of humor. Her children were destined to be princes and princesses and she hoped that one day they would discover that.

She had dispelled a great deal of her sadness. The webs in her eye were still there, but she focused on other things.

But the spider named Sadness had other ideas. One night, she crept into the princess’s bed. The princess awoke to discover that suddenly webs were completely obscuring vision in the eye she relied on.

At first, she was incredulous. But then, the princess went into deep despair. All she could do was cry and grieve the vision she once had. She withdrew in sadness. The white spider had succeeded.

Melody alighted upon the princess and gently tried to lift her spirits. The princess’s lip trembled and her voice was shaky as she tried to continue singing. Melody swirled notes around the princess as the princess closed her eyes. Even though the webs were unbearable, Melody wove her magic within the webs as she cried along with her.

Once upon a time, the Princess began a journey to touch many people. Now the princess could barely remember when she was joyful. Her ocean of tears had returned.

Melody embraced the princess so tightly. The princess would journey with Melody and a white spider named Sadness for now. 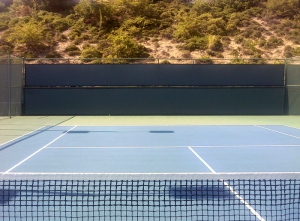 Email message to a friend:

Yesterday, I had a big disturbance in my GOOD eye. Just like what happened to my left eye in January, the gel separated from the eye wall in my right eye. There are large areas of blurriness (from blood) and dark floaters everywhere on both eyes now. I am very discouraged. This is even harder and I am overwhelmed!

Today, I happen to have an appointment to see my eye surgeon. I waited three weeks for this appointment and it was to deal with dryness and inflammation – not this! I want to scream and cry. I hope I can hold it together.

I feel like I am walking through life with a filthy windshield now. All of my words to help other people with grief now apply to me. I hate this situation but have no alternatives.

It is very hard focus on anything. Thank god, for the music that is helping me now.

Message to a tennis friend: (my words are in blue)

I am having MORE problems with my eyes. I had another episode of bleeding inside my good eye. I’m very discouraged and do not feel like playing tennis tomorrow. I’ll play if you can’t find anyone – but I am definitely not in a good place.

I don’t have another player but what can I say if you don’t want to play???

I’ll be there. I’m just having a tough time. But playing is probably good for me, even if my eyes are crummy. I have acuity, but not clarity. It’s hard to explain. I’m not blind, but I hate what is going on!

The next day, I drove to play tennis. I hardly had slept the night before. My mind crackled on and on; like a radio blaring it was noisy. I could hear my own audio stories with words that loudly echoed through my mind. I was thinking about my story named Grief 101. There was a part where I stated my true feelings about grief. I was angry with God and said: “How could you give me this amazing gift and then take it away!”

My eyesight could not possibly be comparable to my dead son, but I was grief-stricken. How would I live with this situation? What was my alternative? As I drove, I concentrated so as to drive safely. But blurriness and shadows were swirling everywhere. Later in the day, I would see my eye surgeon. However, I knew that there was nothing he would be able to do to help my vision. Seeing him was awkward. He felt he had done his part. He was an excellent surgeon and my cataract surgery was considered successful. Unfortunately, I had so many complications, which were probably a result of my extreme nearsightedness.

I openly sobbed as I drove. This was too much! I put on music to soothe myself and heal my pain. But still, pain and sadness were shooting through every fiber of my being.

The last thing I wanted to be doing was to be playing tennis at a country club. My Friday game was normally played at a backyard tennis court. But today it had been scheduled at this club because our usual court wasn’t available. I hoped I wouldn’t see anyone I knew. I wore dark glasses and held back tears as I exited my car.

My body was heavy and I felt very vulnerable as I held my racquet. I began warming up and was grateful that I could still hit the tennis balls with my annoying eyesight. This was certainly better for me than hiding in my apartment.

After a short while, I decided it was actually a beautiful day. I closed my eyes and felt a soft breeze. I inhaled the aroma of chaparral from the nearby hillside. Perhaps life could still be decent, even if my vision stayed this way. I was determined to find a way.

I was introduced to another woman player who was filling in for our group. When I told her I was going through a divorce, I didn’t want her to feel sorry for me. I quickly let her know it was my choice and briefly shared my story. Then she said, “Well you must be happy about your decision, because there is definitely a glow coming from you.”

I was surprised to hear that. I didn’t feel like there was any glow about me. I accepted her words and was pleased that despite my pain I could still smile.

The two hours went by and as soon as it was over, I fled to my car. I needed my music to soothe me immediately. I was in an emotional crisis because I began crying again.

But playing tennis was excellent information for me. My eyesight was acceptable because I could still hit a tennis ball. I had actually played fairly well and that amazed me.

Later that day, I had an appointment with the ophthalmologist who had done my three cataract surgeries. Just as I expected, he explained to me that no treatment existed for annoying floaters; eventually I would get used to them. He examined my retinas, and they were intact; I was grateful about that. He did say that my dryness and inflammation could be treated with another eye drop medication. I left with a prescription. He said it would take at least several weeks before I would notice any improvement. His last words were, “Do not call me for another appointment until at least six weeks go by!”

I walked to my car with my eyes still dilated. My discomfort was so intense, that I began to cry again as I drove home. I stopped crying once I put on my music. Over and over, I thanked god for my musical elixir.

It was clear to me. My annoying eyesight was sucking the joy out of my life.

It made it difficult for me to concentrate and to do many things. It gave me headaches, especially when I was doing artwork. But I could still draw. I could drive. I could still work with my computer and play tennis. How fortunate I was!

My greatest challenge was to find my joy again. I suffered for so many years with grief, and was a zombie for decades after that. My journey had brought me boundless joy. Now I was sad and grieving for my former eyesight!

The insight from this was profound. Perhaps God had another message for me, since the word “insight” includes sight!

Grief is part of life.

In an instant, we can lose something that we take for granted. Time might heal, but moves slowly when you are in pain.

No one else can truly know of our pain unless they are also living with it. I do maintain hope that I will feel better soon, but at this moment I am simply putting one foot in front of the other.

This fairy statue captured my eye during a recent voice lesson with my teacher, Kimberly.

4 Responses to MY TEARS I HIDE