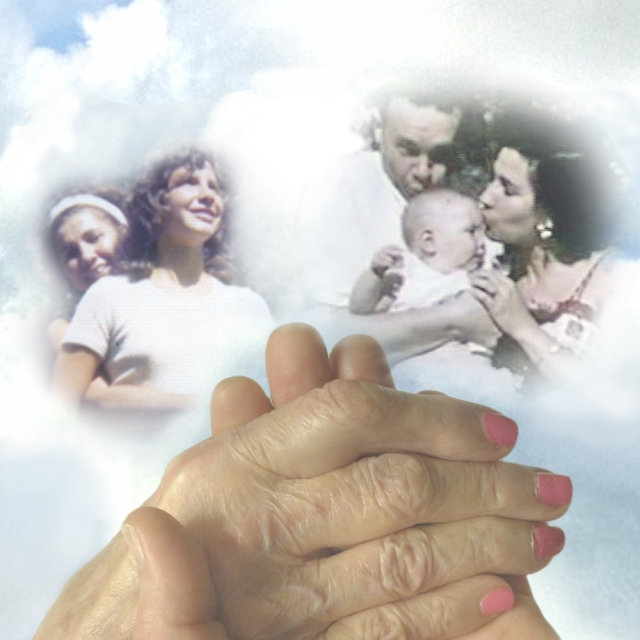 A VIDEO TRIBUTE TO MY MOM:

Click the blue links below to hear my song:

YOU WERE THERE INSTRUMENTAL Copyright 2014 by Judy Unger

All my life, every day; you were there when I’d need you

all the time, I just knew; you’d be there

and you’d see me through

You were so strong; you’d pick me up when I’d fall down

so I can see all the strength you gave me

Although I try, it’s hard to say goodbye

to someone who’s loved me all of my life

and when I’m sad, because you’re not there

Everything that I did you’d applaud; you were right there watching me

as I grew, sharing joy and my heartache, too

Now I’m so strong; I picked you up when you fell down

I’ve learned to see just how strong I could be

Although I try, it’s hard to say goodbye

to someone who’s loved me all of my life

and when I’m sad, because you’re not there

When you are gone, I’ll say a prayer

and I’ll remember how you were there 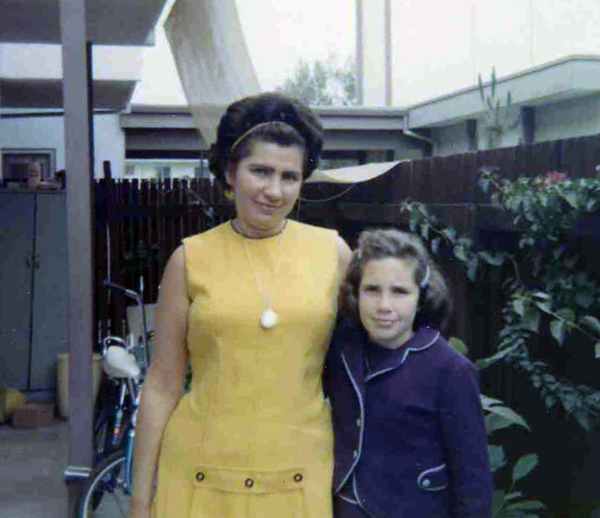 This picture of my mother and I was taken in the patio of the coop where I am now living. I see my old bicycle in the background. 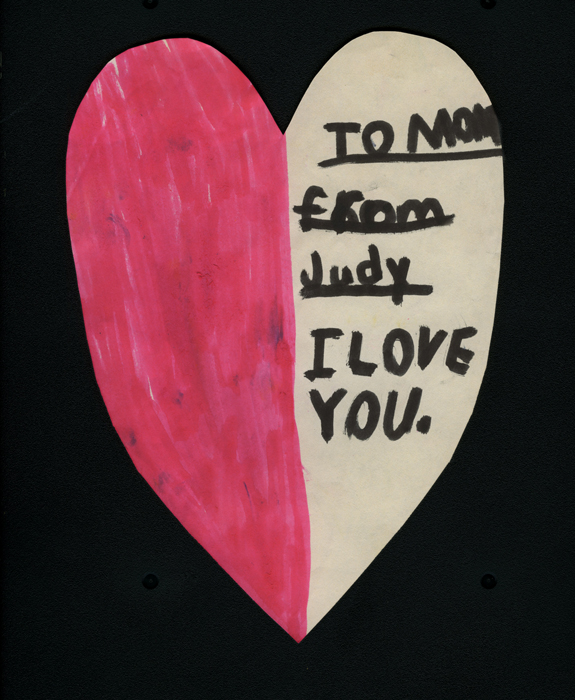 My father saved a lot of my childhood artwork. I remembered drawing many of these pictures. 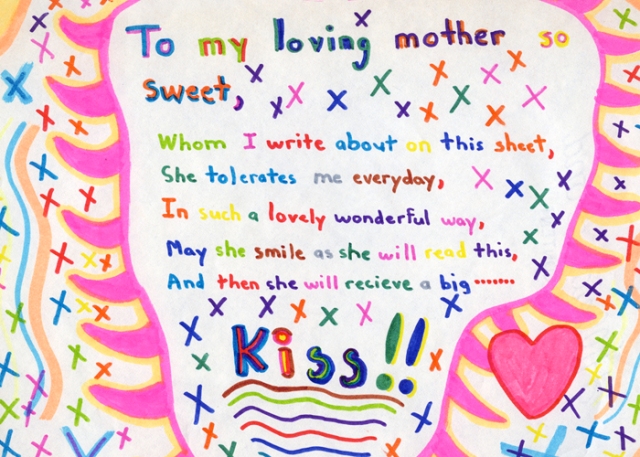 This picture is of my mother when she was young. It looks a little strange due to a photographer’s poor retouching. But my mother still looks very beautiful. 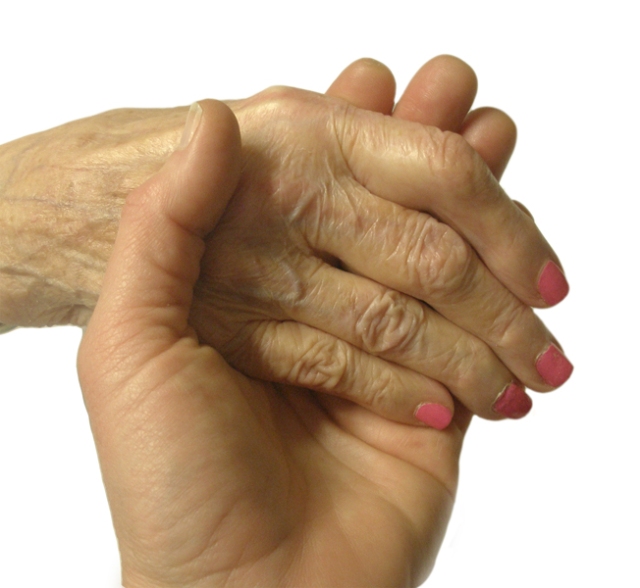 I took many pictures of my mother and I holding hands two years ago. I wanted them so I could create a song cover for “You Were There.” Sadly, my mother has had a terrible nail fungus for two years and her hands do not look like this any more.

Late at night, I allowed myself to edit the vocals that I continued to record. Mother’s Day was right around the corner and I was facing the one-year anniversary of my father’s death. For those reasons, I concentrated on two songs; one was for my mother and the other for my father.

Memories of their love had me very connected to both songs. I found it beautiful how I was able to channel my emotions into singing.

Ever since my father died, I became closer to my two older brothers. Both of them lived nearby. It was comforting knowing that they cared about me.

But sadly, my two brothers were not communicating with each other. I was grateful to have both of them, but sad about their rift and my fractured family.

Every Thursday, I had lunch with my middle brother, my mother, my nephew and my mother’s companion, Miriam.

On Saturdays, I met my older brother and sister-in-law for lunch with Miriam and my mother. Sometimes, a grandchild joined us. 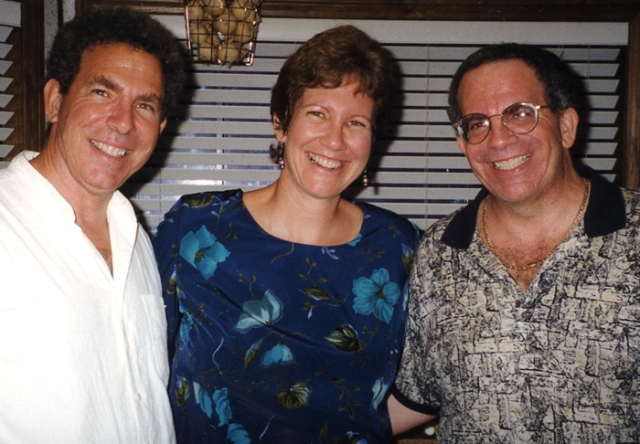 My brother, Howard, is on my left and Norman is on my right. This was taken 13 years ago at my 40th birthday party.

It was Thursday, and I dashed out the door to pick up Miriam and my mother at the nursing home. As I drove, I enjoyed listening to the new vocals that I had been concentrating on all week. I had only finished assembling revised vocal lines at 1 a.m. I wanted to make sure that I hadn’t made any mistakes putting them together when it was so late at night.

But everything sounded great. I always heard things that I wanted to fix, but had to let go of it. I didn’t have time now to fiddle with every song when I had so many to work on. Editing a vocal line probably required at least ten hours for me.

As I listened to my songs on the freeway, my heart was dancing. A few tears escaped and lightly streamed down my cheeks.

I realized that I was glad to be seeing my mother. I couldn’t believe that she was still on this earth. How lucky I was to be able to have lunch with her! I had looked for a Mother’s Day card to give her and my heart ached searching for a card that I knew she couldn’t read. But Miriam would read it aloud to her and display it on her nightstand at the nursing home.

Sadly, my mother’s dementia continued to advance. She became thinner because her memory of chewing and swallowing had faded. Pureed food became necessary, and gelatin had to be added to any liquids.

But she clearly lived for these lunch outings. On good days, she smiled broadly. However, most of time now she was very quiet. When she did try to talk, her words made no sense. Often during these lunches, everyone simply talked as if she wasn’t there. I wondered what she could process and if she was aware of what was going on around her. 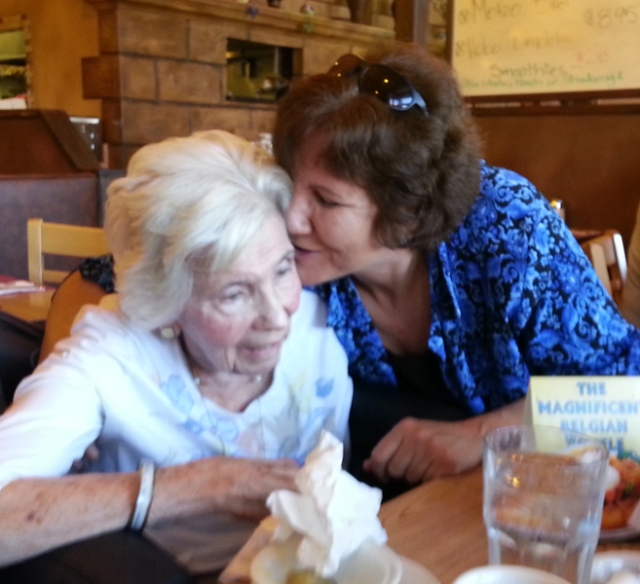 Something was definitely keeping her going.

Miriam was waiting for me in the parking lot of the nursing home as I drove up. She pushed my mother’s wheelchair next to my car. I noticed how my mother’s body was in a contorted position and she looked skeletal. In order to get into my car, my mother needed to stand; it was a herculean effort for her.

After Miriam strapped her in, I leaned across my car so I could kiss my mother. There was no doubt that she knew it was me. Whenever I drew close, her eyes beamed with love.

It was clear that my mother was quite exhausted from getting into my car. She began to cough and her spasms were deep; she was rattling with congestion. I reminded myself to call the charge nurse later and check to see if she was receiving breathing treatments.

We arrived at our usual restaurant, and I took a seat. My brother and nephew were waiting for us. I glanced around to look for a certain waitress. In my purse, I had a CD for her. A few weeks earlier, I had told her about my music on my blog. The following week, she warmly hugged me and told me that she had enjoyed reading my stories and listening to my songs. I was touched.

It was always helpful for me to connect with other people by sharing. It gave me a sense of purpose and fueled my journey.

It was interesting though that my middle brother had never heard any of my music. I was hesitant to share a CD with him – I decided it was probably because I didn’t want to impose upon his time. I knew he considered my music and writing a “hobby.”

As I sat looking at my mother across from me, my thoughts drifted. I decided that this was probably my last Mother’s Day with her. It just didn’t seem possible for her to continue this way.

Our lunch went by quickly. My eyes hurt and I closed them whenever possible. I sang in my mind and it relaxed me. I was also preparing myself for the recording session I had in two hours.

Whenever I sang, I was uplifted. I loved connecting with my vocal cords; the sensation was amazing and completely new for me. Singing brought me joy; I even connected with god. Life was great because I had music.

My mother’s cough seemed worse than usual, and it was time to go. I said goodbye to the wonderful people working at the restaurant and hugged my brother and nephew.

Because of my mother’s fatigue, she was unable to stand up in order to get into my car. Miriam ended up lifting her out of her wheelchair like a rag doll. My mother grunted as she collapsed into the front seat.

On a whim, I asked Miriam to take a few pictures of my mother sitting next to me in my car. It didn’t concern me that I had not spent one iota of time on my appearance. I only wished I had thought of it earlier, before my mother became so tired.

As I drove back to the nursing home, I was excited to share my new vocal for “You Were There” with my mother and Miriam. I plugged my iPod into my car’s audio system. For over ten years, my old mini-van did not have a working radio. Now that I was leasing a new car, I loved listening to music and as a result, I really enjoyed driving.

The notes of “You Were There” began to fill my car and all of my sadness dissipated. My heart was bursting with joy.

I looked over at my mother and her eyes were closed. Then I turned around to look at Miriam in the backseat. Miriam was mouthing the words to my song. I could see her eyes were glistening in the sunlight.

We were at a stoplight and I felt compelled to lean close to my mother so I could whisper in her ear. I said, “This song is for you mom. Every word is absolutely true!” I was surprised when she lightly nodded.

A moment later, we arrived at the nursing home. Miriam jumped out and I popped the trunk so she could take out my mother’s portable wheelchair.

My song was almost over. It softly ended with violin strings playing the last note. I gently unbuckled my mother’s seatbelt and she opened her eyes.

“I loved seeing you for lunch, mom.” Then I asked her, “Did you like my song?”

Her lips softly moved. Her words were clear and soft. I was stunned. I felt waves of emotion sweep through me.

Miriam pushed my mother’s wheelchair through the gate and they disappeared.

Like sweet notes of wind chimes, what my mother had clearly spoken aloud continued to reverberate through my mind.

Over and over, I heard her whispered words. 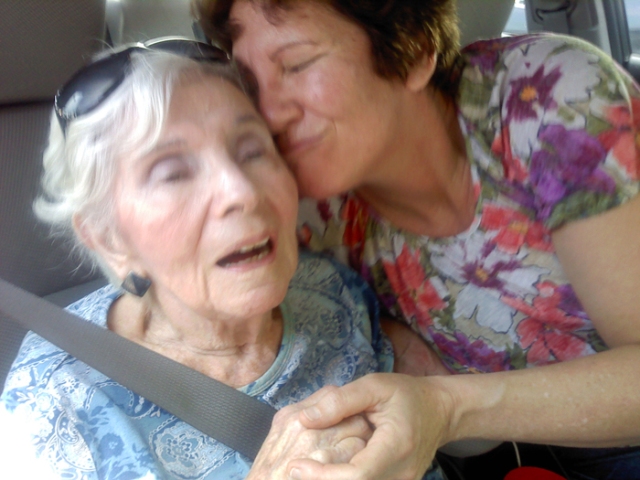 I'm an illustrator by profession. At this juncture in my life, I am pursuing my dream of writing and composing music. Every day of my life is precious!
View all posts by Judy →
This entry was posted in Uncategorized and tagged "sandwich generation", acoustic guitar, Aging Parents, Caregiving, composing, creativity, dementia, GRIEF RELATED, guitar, healing music, I picked you up, inspiration, Judy Unger, loss, love for a mother, lovesong, lyric development, lyric writing, lyrics, mother, mother daughter relationship, Mother's Day tribute, mother's illness, Mother's love, Music, optimism, Ordinary Life, original songs, singing, songwriting, tribute to my mother, You Were There. Bookmark the permalink.

5 Responses to YOU WERE THERE – PART 3