A picture of my father from three years ago wearing his favorite hat.

Only two weeks ago, I wrote a story comparing the death of a kitten to watching my elderly father deteriorate and suffer.

This past week, a different path appeared for me to take with my father.

To do nothing was simply another path I had been on that was becoming quite difficult due to my father’s suffering.

When it comes to making medical decisions, I definitely use intellect and seek advice from professionals. However, in the end it is my intuition that has guided me.

My first experience with making a major medical decision came with my 5-year-old son, Jason, needing open-heart surgery. At that time, I sought out a second opinion from another surgeon because it was necessary to choose between a mechanical heart valve and a pig’s valve for my son.

Sadly, my son died following that surgery. I will never forget being told his odds of survival with that surgery were 95%.

With that experience, I always remember now that there is someone who is unlucky enough to fall into the smaller percentages.

After my father’s first urologist told me that he could not remove my father’s kidney stones (despite two attempts) he said, “99% of the time I can get at them.” As I heard him say that, I was reminded how my father was in the unfortunate 1% of those who were not so lucky.

I learned a lot more about making medical decisions with my mother’s illness. Two years ago, I felt rushed into allowing her to have surgery to repair a broken shoulder. I was told there wasn’t time to get another opinion; the weekend was approaching. The surgeon said that by waiting her shoulder might not heal as well. I also felt pressured by my brother and my father to allow for my mother to have immediate surgery.

My mother ended up with complications because she was slightly sick at the time with a cold and had poor immunity. She was on a respirator for almost two months.

After Jason’s death and my mom’s respirator ordeal, I continue to let my intuition guide me. I also learned that things might not go as expected no matter how well thought out a decision might be.

All this experience gave me the strength to make an extremely difficult decision a year later when my mother broke her hip.

Once again, I was told she needed immediate surgery. However, this time I did not allow myself to feel pressured into making a decision. With a lot of agonizing over the fact that she would be placed on hospice without it, I decided that it would be best for her not to have surgery.

It was a difficult decision to make since it was extremely rare for someone to refuse a hip repair. My mother’s hip healed, she was taken off of hospice, and she has been able to walk in a limited fashion. Unfortunately, she suffers from dementia and is off balance. She still needs to be watched carefully at all times.

I am grateful for my intuition. It has served me well, and I continue to follow it as I guide my father’s care.

My eighty-seven year old father has been languishing with urinary problems. He has a catheter due to a morbidly enlarged prostate and he has two, huge kidney stones. A stent was surgically inserted to allow his kidneys to drain.

I would never have thought that urinary issues were life threatening, but I have watched my father’s life slowly ebbing away.

My father really liked his first urologist who had failed to remove his kidney stones after two attempts. He didn’t want to “upset him” by going to another doctor. My father almost died from blood loss and infection after the last “less invasive” procedure.

Only last week, when I managed to get an appointment with this doctor he revered, I was upset when the doctor noticed the urine in my father’s catheter bag was extremely cloudy. He said my father had another infection going on. My father was on antibiotics, so I wondered why he wasn’t better. What if I had not taken him in?

At this appointment, it made me sad when my father whispered, “Doctor, I’ll do whatever you say; I cannot live like this anymore.” He had so much faith and trust in his doctor. I wasn’t so sure.

My doctor friend, Sam, encouraged me several times to get another urologist’s opinion regarding my father. I asked him who he recommended. He gave me a name and I shared the information with one my brothers. Delegating was something new for me. I was proud that I had enlisted my brother’s help because I had not transported my father anywhere by myself, I was afraid. However, after a few weeks nothing happened. When I asked my brother what was going on with taking our dad to this doctor, he told me he had refused to go.

My brother, Norm, with my mom. This picture is from about ten years ago.

Sam continued to push me to get a second opinion. In my heart, I knew Sam was right. I was tired of doing nothing. It seems like when I let go of keeping up with every detail of my parents’ lives things went wrong. That has been a very familiar theme for me. It has also been repeated with my children.

I made the appointment and told my father he must go with me; I now had the confidence I could transport him myself because I had already taken him out from his facility a few times. It just felt like something I had to do. My mother’s caregiver, Miriam, offered to help me. I realized I didn’t need help, and that felt great!

I had no expectations when I took my father to see this other urologist.

That day, lifting his heavy wheelchair was familiar and not nearly as difficult as it was the first time. I understood how to keep an eye on his catheter hose because it was very easy for it to get tangled between his legs when he slid into my mini-van.

I have stepped on his bag before and it was not pleasant!

When I thought of writing this story, a thousand metaphors crossed my mind. I felt like I was on a horse, galloping into the sunset with my father holding me tightly. I have already used the metaphor of feeling like a fireman climbing into a window to rescue someone in a burning house.

I’d like to think I am rescuing my father. But I cannot say that in confidence because I do not know what the outcome is going to be.

All of my ideas didn’t translate into my wanting to write anything other than the simple fact that I am not afraid.

What I have offered my father is hope. That is all. Sometimes offering hope is all that matters.

I liked the way this other urologist explained things to my father and I. He spent time drawing a large diagram for us. Perhaps because he knew Sam, he was anxious and eager to help my father and I. Most of all, I had the sense that he wanted my father to feel better as soon as possible.

He said he was ready to try a third time to remove my father’s kidney stones using a less invasive procedure; there would be no cutting. He told me he could do a more unconventional technique, involving a slight kidney puncture that might also work without major surgery. I was intrigued. He sounded very experienced and I believed him. I felt like I could trust him.

He said that if I gave him a “go-ahead,” he would schedule the kidney stone removal the following week. After that he would tackle my father’s enlarged prostate and catheter issues.

Throughout the appointment, my father was shaking with a blanket covering him in his wheelchair. I told him that I really liked this doctor’s aggressive approach.

I asked my father what he thought about everything. I noticed his eyes were bulging and his lip was trembling. In a weak voice he said, “Judy, this is such a boost to my morale. I don’t care if I die, but I am so hopeful to know this might help me!”

I shook our new doctor’s hand and told him to go ahead and schedule everything. My father was more than willing to go ahead.

With making this more aggressive decision, which is so counter to my mom’s situation, I am completely comfortable with whatever the outcome is. With Jason’s death, I learned that life is not about being in control.

My father has lived a long life and I have been fortunate to be in any position to make a decision to improve his life.

There is irony for me that I planned a two-day get-away with my family next week. I have not gone on a vacation for a year.

I just received a call that my father’s procedure has been scheduled next Wednesday, on the day our family was supposed to leave.

An old picture out in front of where I grew up in North Hollywood. Steven’s apartment was up the stairs behind me in this picture. I can’t believe those pants I’m wearing! Our dog, Teddy, always had one ear up and one down.

Message from my brother:

It sure pays to get a second opinion. Great news. I sure hope it all works. I’m tired of seeing dad this way. He’s so depressed.

I agree. And it’s more than depressed. Even though he won’t admit it, he’s in pain. He is moaning constantly and it makes me so upset to hear his groans!

I just wanted to thank you so much for recommending this wonderful urologist. He explained everything in easy terms.

Both my father and I were very impressed with him. It made it easy to “bite the bullet.” I told him that I wanted him to help us ASAP – it’s ENOUGH already! He’s aggressive, and plans do the procedure next week after my dad goes off the Coumadin. YAY!

I’m tired of seeing my father in pain deteriorating before my eyes. Even my dad said to me that he’d rather die than go on this way.

Ps. I am so fortunate you popped into my life, to be so helpful and kind. Thanks so much for imparting your wisdom and experience.  It’s very much appreciated! 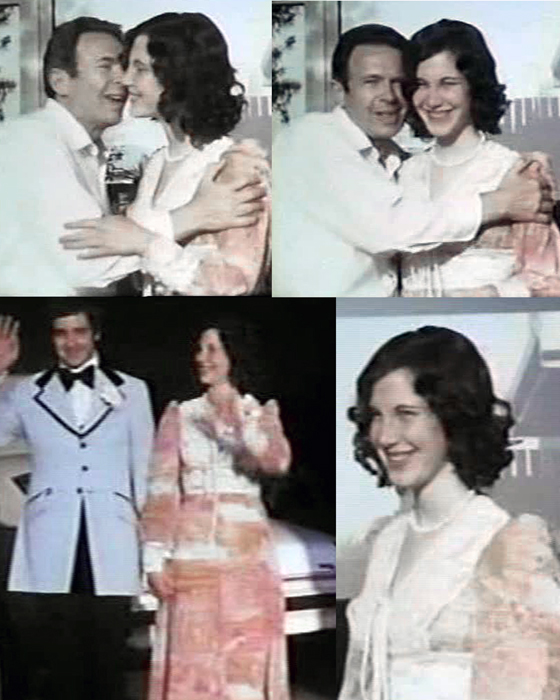 In these pictures, my father is saying goodbye to me as I leave to attend Sam’s prom. My father never could have guessed that someday Sam would be helping him with his medical advice!

I'm an illustrator by profession. At this juncture in my life, I am pursuing my dream of writing and composing music. Every day of my life is precious!
View all posts by Judy →
This entry was posted in Uncategorized and tagged "sandwich generation", Aging Parents, Caregiving, childhood friendship, high school memories, kidney stone removal, medical decisions, tather's illness. Bookmark the permalink.