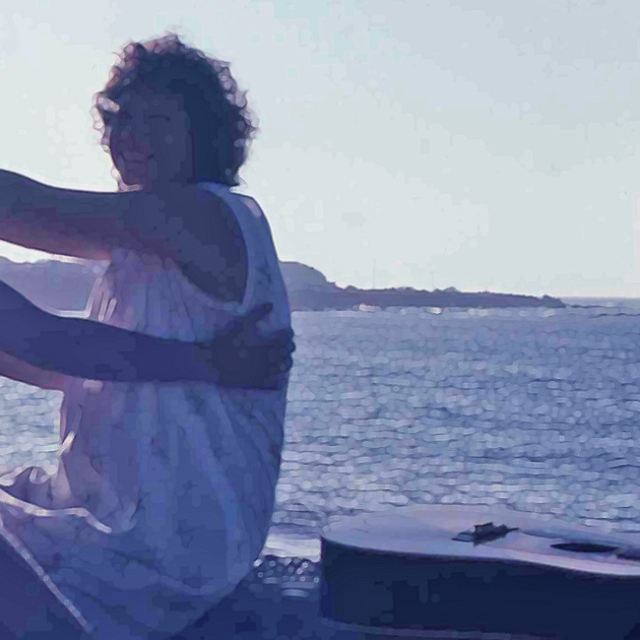 This is a picture from my honeymoon. My guitar is next to me on the right side.

I was tired; driving home from college at CSUN. I was approaching the intersection only a block away from my home. Suddenly, a car made a left turn directly in front of me. It happened so fast and I couldn’t stop. I hit my brakes and plowed into the car.

There was a sickening thud, and my car screeched to a halt. In slow motion my body whipped forward and I heard a crunching noise as I hit the steering wheel.

Now it was quiet. I sat there and realized that I was very wet. I looked down at all the blood on my lap – it was pouring from my mouth. It seemed strange that I didn’t feel any pain, though.

I don’t usually share the card covers, but this one was special. I used to play that song by Gordon Lightfoot. Carol sent me this one. Clicking on this makes it larger. 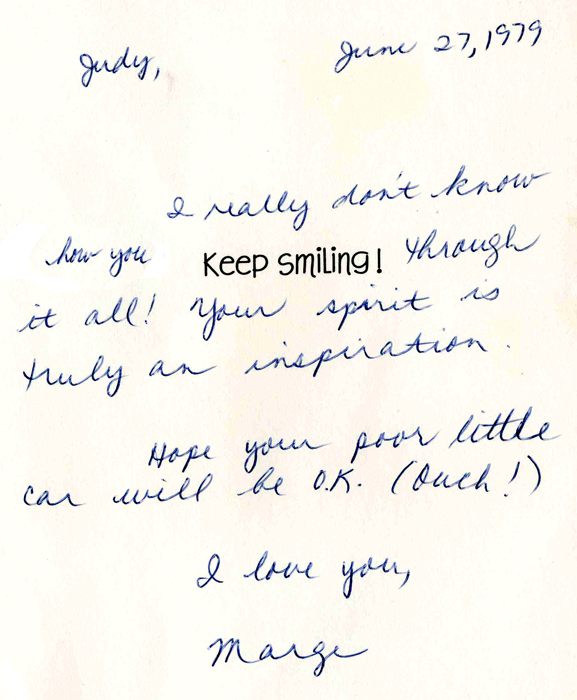 My friends rallied around me after that car accident. Marge was even worried about my poor car (It was totalled).

My journey has been so fascinating for me. As I have been rediscovering my songwriting passion, the past and the present have completely intersected!

When I began playing my guitar in February – I pulled out my songbook that held all of my original songs. There were approximately, thirty songs. I only remembered twenty of them, and it was mostly due to an old, cassette I had recorded in 1980. Earlier this year when I reconnected with Steve, my childhood friend, he offered to make me a digital copy of that cassette. At that time, I had no idea how to play or edit songs on my computer.

I now edit all of my own “lesson clips,” and home recordings. I have learned so much on my computer about music!

I put aside all the song sheets for songs I had no recollection of. As I became close to finishing the recordings of all the songs I remembered, I decided to pull out those old, song sheets.

Several of them captivated me with their chord progressions – but not with the lyrics. A month ago, I decided to work on two of them. One was the song I recently recorded, “It You Should See Me Again” and the other was “It Might Have Been.”

My song “It Might Have Been,” was written in 1980 when I was twenty years old. It was at the time that I became engaged.

I wasn’t sure about the lyrics to this particular song. Last month, when I sang the lyrics about “kissing in an ocean mist,” I felt fairly embarrassed! However, with the melody I was transported back to that period in my life.

This song reminded me a lot of my song “Crystal Oceans.” I only remembered the song’s melody on the very first line with the title. It motivated me enough to want to expand the song. Since I had no memory of the melody, I had to painstakingly construct one. It took me several weeks.

When I was finished, I enjoyed singing this song so much that I played it at Kulak’s Woodshed a few days ago. I became quite excited to embrace my vocal range – I went for a super, high note because it just felt like it belonged in my song. Why not?

My journey has been all about joy and taking chances. I continue to feel lighter and freer every single day.

The three verses speak to my relationship with Michael. The first verse was our romance. The second verse was when I left him, because he was far too serious for me.

In 1980, I was in a car accident about a block from my home. It was a painful experience for me at that time in my life. However, it was not a huge trauma compared to later events in my life!

My accident was prior to my becoming engaged. It was not my fault. My seat belt had been broken – I did have the lap part on, but not the shoulder harness. In those days they were separate, and my father hadn’t gotten around to having it fixed for me.

My head hit the steering wheel and my lower teeth broke through my chin, leaving a gaping hole. I remember there was a lot of blood, but no pain.

After the impact, I sat for a moment and got out of my car. I was told to lie down on the pavement. Unfortunately, one of our neighbors was driving by and saw my wrecked car, and me lying on the ground, as well.

I can only imagine how it went when she raced to get my mother, approaching her with an ashen face and shaking voice! My mother came immediately, however, rather than wait for an ambulance my mother decided to drive me to the emergency room. I had to wait almost six hours to get stitches on my face.

It was a big mistake not to have a plastic surgeon do the repair on my face. When my oldest son was bitten on his face by a dog, I had a plastic surgeon called in as a result of this lesson. I was left with a prominent scar on my chin. Unfortunately, the scar did not heal well, and every time I smiled I had a pulling, crooked grin.

Two years later, I had plastic surgery to minimize my “keloid scar” – as it was called.

A few months after the car accident, I appreciated my relationship with Michael very much and decided I was ready to get married.

Cheryl’s cards to me were always especially loving.

I entered George’s studio this morning. I told him I was tired. Usually I can manage with only four hours of sleep, but today I was dragging a little.

I recorded the guitar track fairly quickly – it wasn’t too complicated. I did resolve my issue of whether to repeat certain chords on the first line of each verse. I decided not to draw it out so long.

I was about to sing. “George, this is my last song for a while – I have nothing left for you to arrange,” I said. I felt wistful as I said that.

At that moment, I felt a wave of tears wash over me. I was completely emotional as salty tears filled my eyes and throat. I was about to sing about kissing and it had been such a long time since I have had romance in my life.

I cleared my throat, and gathered my emotions. I sang my song with complete abandon and was transported back. 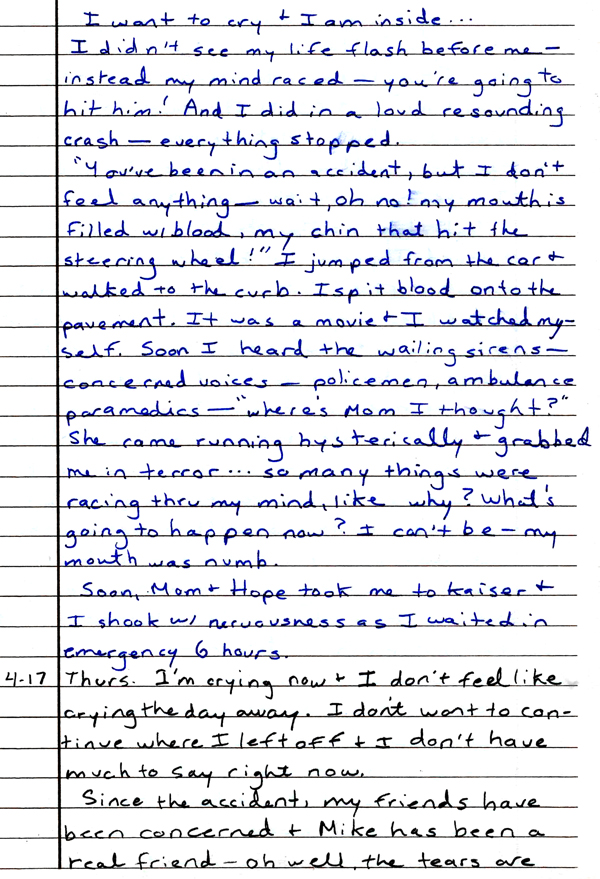 It might have been the very first time we kissed

lightly sprayed by an ocean mist,

my mind was in a blur

I remember how shy you were

No, it might have been the time that I left you

Loneliness filled my dreams; you were my closest friend

and longing in my heart wouldn’t end

I’d never felt that way before

love was something new

I often wonder when it was

I often wonder when it was

I fell in love with you

As I shook, you held me close; with you I’m not afraid

and through those darkest nights you stayed

All those times, so long ago

Are in my memory

I still remember how you loved me

All those times: when we first kissed, when I left you,

Judy Unger and http://www.myjourneysinsight.com 2010. Unauthorized use and/or duplication of this material without express and written permission from this blog’s author and/or owner is strictly prohibited. Excerpts and links may be used, provided that full and clear credit is given to Judy Unger with appropriate and specific direction to the original content.

I'm an illustrator by profession. At this juncture in my life, I am pursuing my dream of writing and composing music. Every day of my life is precious!
View all posts by Judy →
This entry was posted in Uncategorized and tagged acoustic guitar, composing, creativity, Daily Life, guitar, I often wonder when it was, Judy Unger, Love was something new, lovesong, lovesongs, lyric development, lyrics, marraige, Music, Ordinary Life, original songs, performing, singing, songs about love, songwriting, voice lessons. Bookmark the permalink.