I WAS BLESSED TO BE HEALED-PART 1 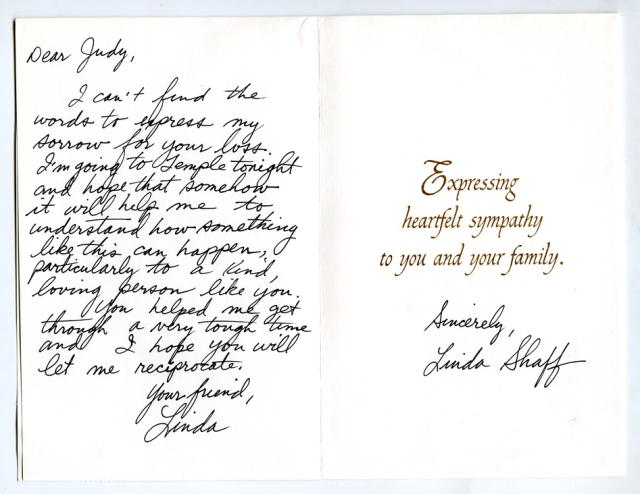 Transcription of the above card, which I received after my son died:

I can’t find the words to express my sorrow for your loss. I’m going to temple tonight and hope that somehow it will help me to understand how something like this can happen, particularly to a kind, loving person like you.

You helped me get through a very tough time and I hope you will let me reciprocate. 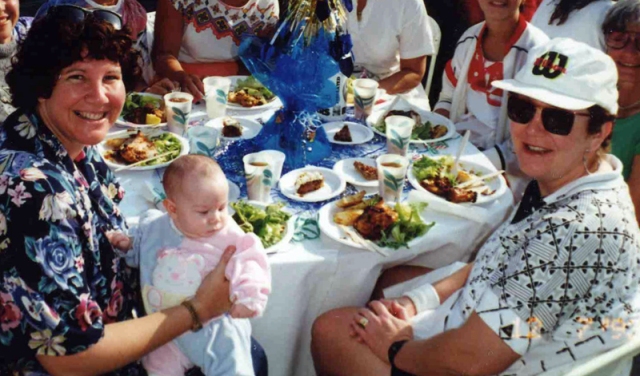 One of the few pictures I have with my dear friend, Linda Shaff. This was taken at a tennis luncheon. I’m holding my daughter who was born one year after the death of my five-year-old son, Jason. 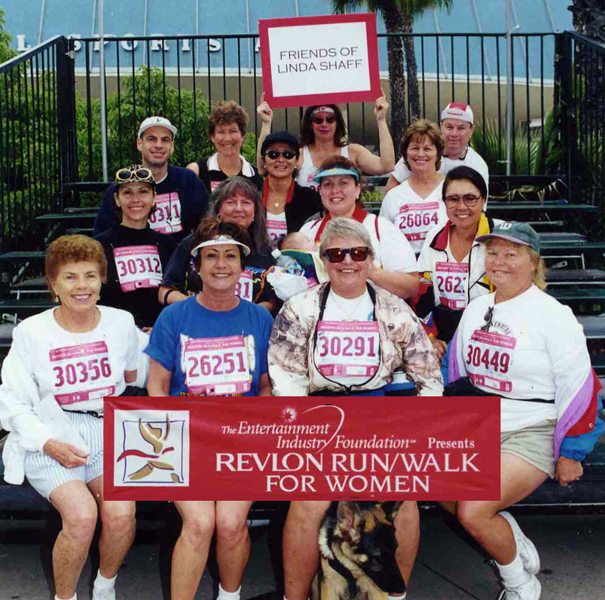 I spoke these words at the funeral for my good friend Linda. I found these notes (on yellow paper) in Jason’s memory box, which I opened 20 years after his death.

This story is about healing and grief – as many of my stories are.

My post title is a line of lyrics from my song “Somewhere I Can’t See.” The entire line goes: “I was blessed to be healed; your love filled my heart.”

I had originally thought to name this post “Grief Was Like Night,” which is a lyric line from my most recent song “Rainbow Through My Tears.” The entire line goes: Grief was like night, without an end in sight.” I changed my mind because it sounded too depressing and I wanted this story to be uplifting.

When I was grieving the death of my child, sometimes it was impossible to imagine feeling better. But I always held on to hope of healing.

It has been twenty-one years since my child died and I consider myself healed from grief over his death. That is a great blessing for me. 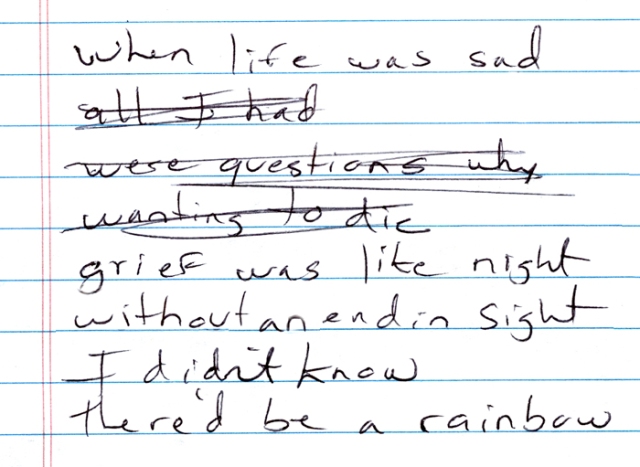 These are my actual scrawled lyrics “in progress” while writing my newest song “Rainbow Through My Tears.” I tried to stay away from dark and depressing lyrics, which explains the crossed out words.

A few weeks ago, I was touched by something from my past that helped to reinforce my message; healing from grief is possible.

The timing was very helpful for me because I was finding myself frustrated. I had spent a great deal of energy trying to convince two fellow bloggers that they had it within their power to feel better.

Bitterness and discouragement about healing was poison to their soul.

My messages were unrelenting and it was clear to me that I was becoming annoying. I began to feel concerned that I was simply aggravating their pain and burdening them. Still, I could not find a way to hold myself back.

I began to wonder what my motive was. My mother had recently died, and I had plenty of my own feelings to deal with.

Were there other people out there that had healed from unbearable grief? Perhaps it was so rare that my offer of hope to others was completely unrealistic.

But then along came this magnificent story.

I didn’t recognize his name and was ready to delete it. But then I stopped.

I knew that last name.

I accepted the request and went to his page. He was a beloved teacher and I was teary looking at his pictures. 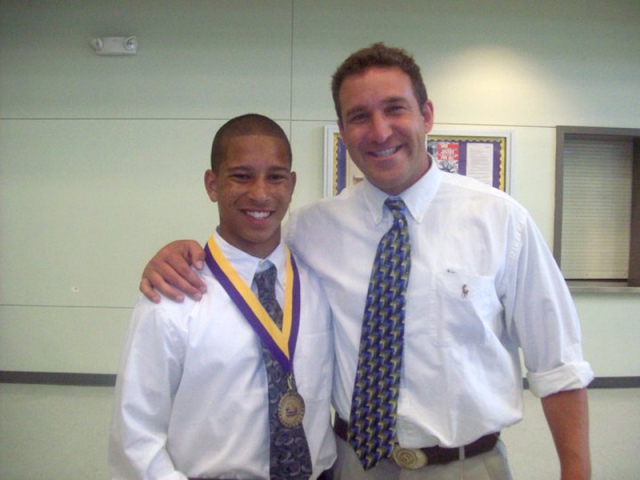 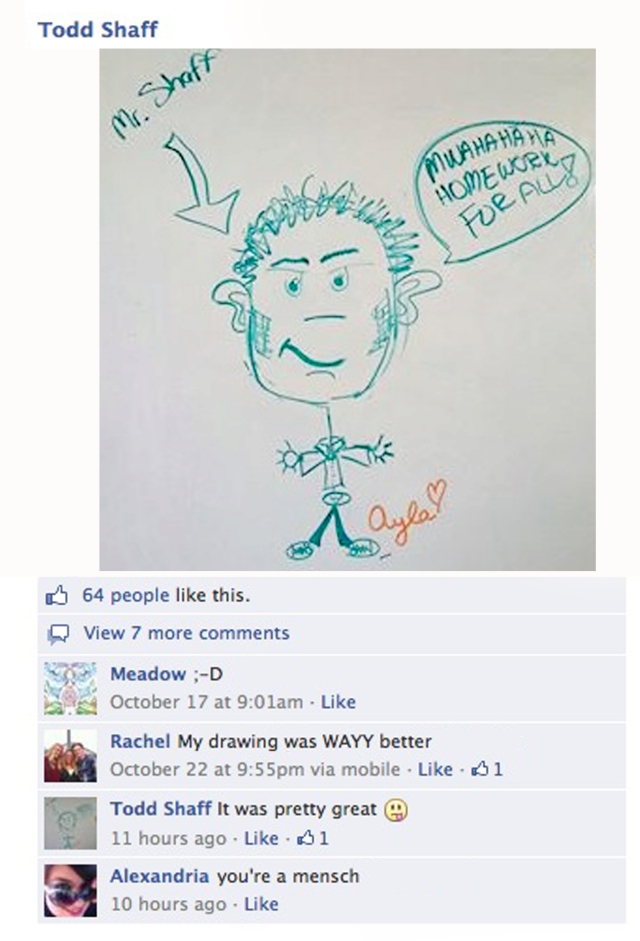 When I was driving on the same freeway I had used to visit my mom at her nursing home – I kept seeing flashes of her dying eyes. As soon as I pushed the awful image away, then my father’s dead face appeared – and after that, Jason’s.

Soon it was going to be Halloween. I hadn’t forgotten how I buried Jason only three weeks before that holiday. All of this was definitely post traumatic stress.

I took a deep breath and allowed love to fill my heart. My song lyrics spoke to me with comfort. The images faded away and were replaced with beautiful ones filled with love.

But long ago, I had another experience of watching someone I loved die.

When I began my blog, I wrote a story about tennis and how much that wonderful sport added to my life. I had a good friend and tennis partner who had died; her name was Linda.

Linda fought ovarian cancer for eleven years. When the cancer invaded her liver, she was facing a losing battle. I had never seen jaundice before and it was shocking to see her glowing yellow skin.

As Linda’s death grew closer, it was so hard seeing her in pain. She couldn’t eat, sit comfortably or lie down.

On one of my last visits, I met Linda’s mother for the first time. Her mother confided to me that it was too much for her to bear, to see her daughter die. She wailed, “I cannot watch this any longer. I must leave tonight. She is crying for me to stay, but I can’t do it!”

It was one of the most horrible situations I had ever witnessed.

I felt awful for both of them: The dying daughter crying for her mommy, and a mother who could not bear to see her child die. 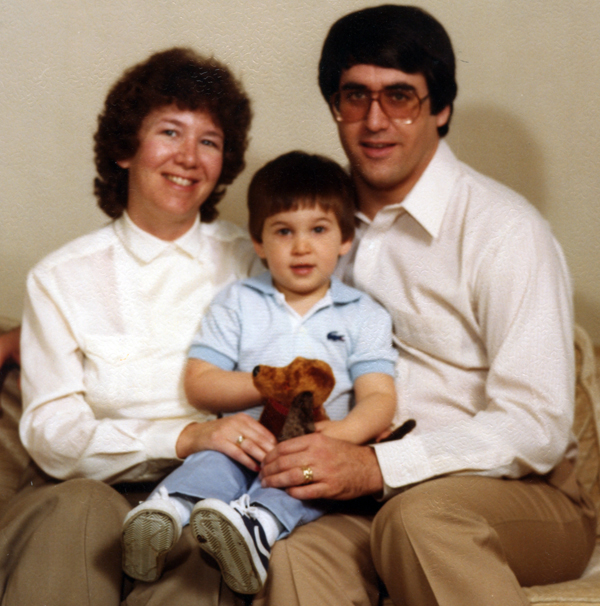 Linda had a husband and teenage son. Through the long course of her illness, it had taken a toll upon her child. She shared with me that he had gotten into trouble.

Linda knew her illness had deeply affected him and she remained optimistic that it would pass.

The day after Linda’s mother flew home, I called Linda’s husband. Her husband’s voice cracked with emotion and exhaustion as he told me she still clung to life.

I decided to face my fear. I asked him if I could visit her again.

He said that no visitors were allowed anymore. But then he sighed and said it would be okay.

He added, “You must know that Linda is very close to death now and totally unresponsive.”

My heart was pounding when I arrived at the house. Her husband answered the door with bleary eyes; he pointed to where she was. There was a hospital bed in the corner.

My friend was skeletal and her teeth were tightly clenched. Yet, I could see her eyes were locked upon mine. She knew who I was, without a doubt.

I touched her arm and remained quiet as I looked into her deep eyes. I spoke very softly into her ear.

I gently told her that I would look after her mother. As a bereaved mother, I was sensitive to the loss of a child – Linda could count on me. I promised Linda over and over the ways that I would help her mother. I knew Linda did not want her mom to be tormented because she had fled her daughter’s deathbed.

It turned out that Linda was not unresponsive.

Somehow she unclenched her teeth and with a whisper she said, “Thank you.” My heart ached with her soft words.

I left her bedside and felt inspired. I was so glad I was able to see my friend before she died so that I could reassure and comfort her.

She died that night.

At Linda’s funeral, I played my guitar and sang the same song I wrote for my dead child: “Beside Me Always.” I also spoke and recently found my handwritten notes for that eulogy.

I kept my promise to Linda.

Every year, I called her mother on Linda’s birthday and death day. Our conversations were beautiful; Linda’s mother was also interested in my life. She offered me support during a time where I faced difficult challenges with my own children. Something very special developed between us over those years we were in touch and I considered her a good friend.

I was always especially eager to hear how Linda’s son was doing. After all, Linda was often so worried about him because she knew how affected he was by her illness.

His name was Todd. 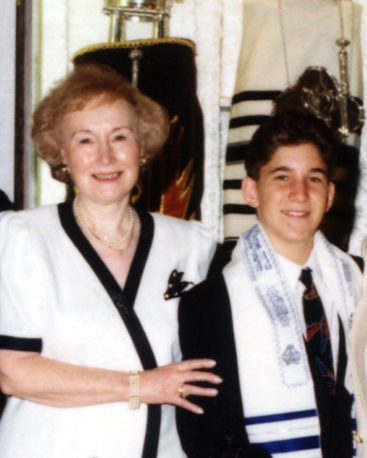 Todd with his beloved grandma.

The first year after her death he began his first year of college. It was a struggle and I believe he had to drop out because grief had deeply impacted him.

But then a few years later, I was so heartened to hear from Linda’s mother how things had turned out. Todd had gone back to school and become a teacher. I thought how proud Linda would have been!

It was perhaps ten years later, when Linda’s father died and her mother became a widow. A few years after that, I called on Linda’s birthday and was saddened when I heard a recording; the phone number was no longer in service. I mailed a card instead and it came back undeliverable. I let a few years go by and wondered. In my heart, I knew that perhaps she was ill or had died.

I planned to keep my promise to Linda and one day I decided to find out where she might have moved to. The only way to do that would be to ask Linda’s husband.

I wasn’t sure if he still lived at the same address. I drove to his house and planned to leave a note if no one answered. But on that day, her husband answered the door.

After a moment, he recognized me. His handshake was firm and warm. He said it had been at least eight years since any of Linda’s friends had contacted him.

He told me that Linda’s mother had died.

In the short time I stood there, he brought me up to date. He told me their son was a math teacher living up north and that they spoke practically every day. They were close again after a period of estrangement.

That was the end of a story I wrote two years ago.

This story is continued with this link:

7 Responses to I WAS BLESSED TO BE HEALED-PART 1