WHEN YOU ARE GONE

I just want to thank everyone who is here today to honor my father, and to support our family with this loss. My father was a simple man, but I know he touched many people. I have always been extremely close to my parents, and it was one of my greatest fears that I could not manage without them. Two and a half years ago, I wrote as therapy when my mother became seriously ill. I discovered that I could fill the void with writing and music. After that, my life completely changed.

Certainly, the greatest blessing was that I was able to share my healing and joy with both my parents. Because they suffered alongside of me after the death of my firstborn son, Jason, it was beautiful that they lived long enough to see their daughter happy!

Jason died in 1992 at the age of five, and I did not speak at his funeral. Being able to stand up here today – with the ability to speak and to sing is a testament to how much I have healed.

Dealing with my mother’s mental decline from dementia has been very difficult and sad. My father and I clung to each other and tried to cope with it as best we could; my father lost his wife and I lost my mother. Over the past year, we became very close, and in some ways that makes his absence hard for me.

One year ago, when my father was in the hospital and I thought he might die, I was inspired to write my song “Set You Free.” My father recovered, but after that he lost his independence and steadily deteriorated. As my father became sicker, there were very few things that brought him joy. His children and grandchildren were always the highlight of his life. Every outing or visit, became the brightest light in his day.

For two years, I have been creating an audio book that tells my fairy tale story of healing from my grief through music. I became even closer to my father when I shared my emerging book and songs with him. The compliment I treasure most in the world was when he said, “You are a terrific lyric writer!” My father was a man of few compliments, so I knew his words were sincere. He told me my book and songs made him cry, because although he knew I was happy, he was sad knowing how much I had suffered with grief over my son’s death. That is why I know he wouldn’t want me to be crying now. Not that there’s anything wrong with tears; I have those, but these are happy ones.

I believe that singing is the best way for me to express my feelings. Although it was challenging to sing before burying my father, it brings back memories of how I sang at my own wedding. My mother was a strong person back then, and it wasn’t easy to go against her wishes; she was adamant when she told me, “Brides do not sing!”

But today, I celebrated the essence of my father by singing from my heart. Everywhere I look, I see reminders of both my parents’ love. I am going to miss my dad, but I know more than anything he wanted me to be happy. I am happy knowing that he is not suffering anymore. He received his birthday wish.

I just know that at this moment, he is looking down and smiling.

SOME AMAZING THINGS I PULLED OFF IN THREE DAYS:

Created a slide show with music

Practiced my guitar so I could perform without fear

Created a handout with my songs’ lyrics and artwork

Just a few of the stressful things I went through in those three days while trying to do the amazing things:

My father paid for a different mortuary than the one at his burial site. Unfortunately, the nursing home called the wrong one and it I had to pay $375 to get my father’s body released to the correct mortuary.

Just as I was telling my son to be careful because the floor might be slippery since our carpets were wet from cleaning, I slipped and fell flat on my tush. Once again, I had a guardian angel that protected me from harm. But I did walk funny after that.

The mortuary told me that the burial site would have some “additional costs” for me. My father had prepaid all of the costs, right down to 6 copies of death certificates. He would have been appalled by this. Those additional costs totaled $1,800. I was shocked, but paid it; I knew there was no possible recourse. It felt like I was being kicked while lying on the ground.

Those costs were since 2008 when my father paid for everything. There were things like: dirt removal, permits, opening and closing the vault, and many more things that caused my blood to boil. Being in an angry place was not helpful for me. I found out this was a common practice and those extra costs were typical. It’s amazing to me that many people aren’t aware that such a scam exists.

I prepared my home for an onslaught of people as it would be the first entertaining I’ve done in well over two years.

I received a call from the mortuary that there was another plot for a man with my father’s name who was also married to a wife with my mother’s name. Fortunately, we were able to solve the mystery as to which one was correct.

It was sad for me when I realized that I couldn’t call my father to even complain to him about these things. I missed him already. 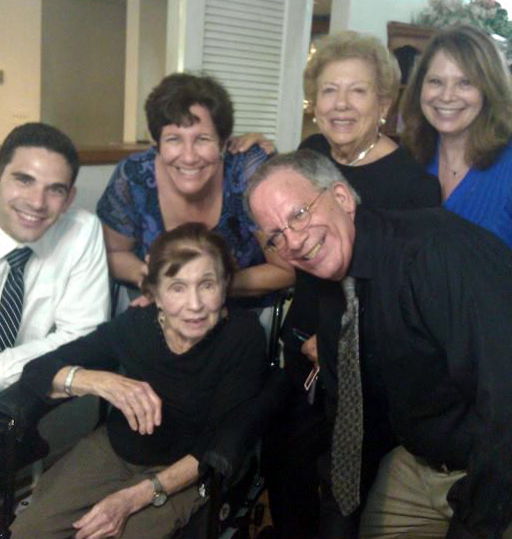 I love to write and will certainly be back to update my blog again soon. I want to share a few of the interesting pictures I found and one that is from the reception at my house.

Miriam brought my mother to the reception. My mom did not comprehend that my father had died, but enjoyed seeing many family members whom she recognized. In the photo above, my oldest brother, Norm, is on my mom’s right. Her grandson, Sean is on her left. A family friend, Sue, is behind my brother and to her right, is my sister-in-law, Jo.

One of the pictures I scanned showed my mother, Norm and I at Disneyland. How fascinating to see the aging process through pictures!

Although the picture below has a double exposure, it is one of the few I could find that depicted my friendship with Steve de Mena, who has done more to help me with my music than I could possibly explain. As children, we were inseparable playmates. 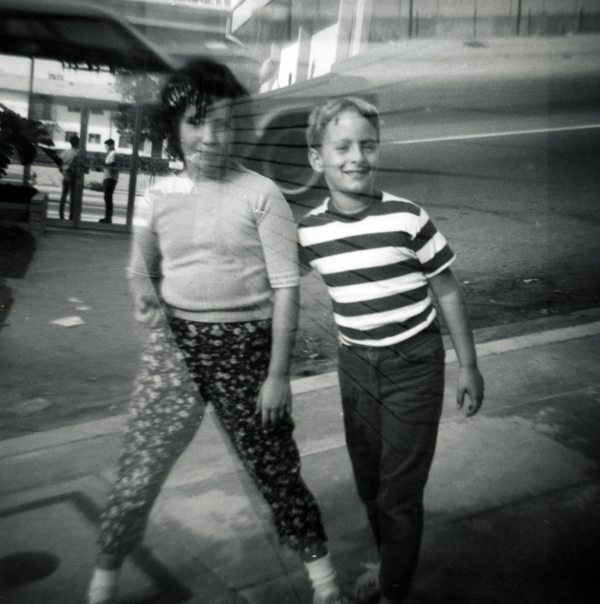 This picture is from the early 1900’s and is of my father’s parents. I only knew my grandmother as a very old Russian immigrant who never smiled. How interesting to see her when she was young! 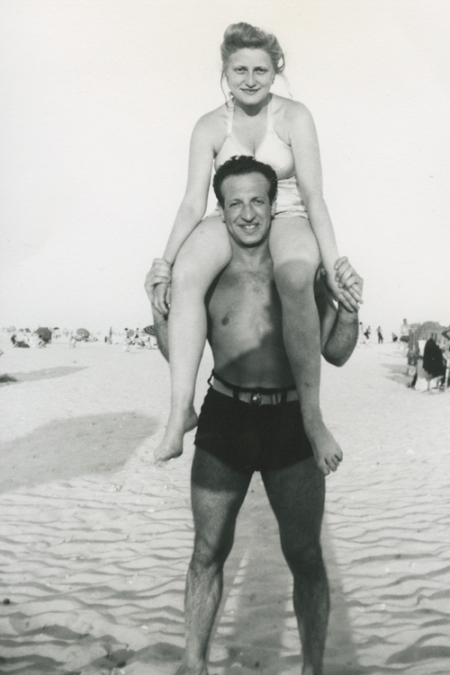 This last picture speaks for itself. I wish my father would have allowed me to clean his house out while he was alive. He would have enjoyed watching me discover these wonderful treasures he saved for so many years. The paper Burger King bags he collected, I could do without!

I'm an illustrator by profession. At this juncture in my life, I am pursuing my dream of writing and composing music. Every day of my life is precious!
View all posts by Judy →
This entry was posted in Uncategorized and tagged Aging Parents, childhood friendship, death, father's funeral, GRIEF RELATED, inspiration, memories of father, memories of parent, Ordinary Life. Bookmark the permalink.

1 Response to WHEN YOU ARE GONE