SO MANY THINGS I WANTED TO TELL YOU 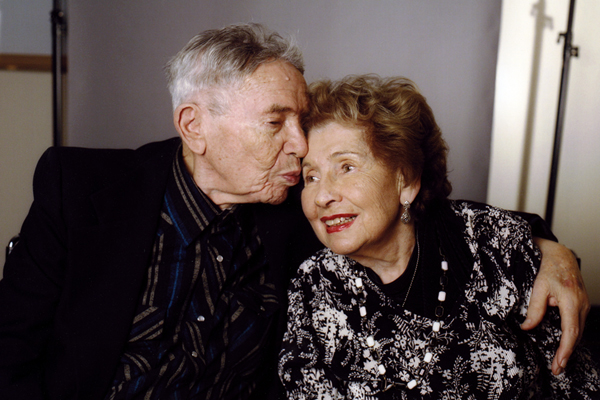 My parents. This photo was taken for a brochure from their facility.

An email message explaining why I didn’t want my mom to have surgery to repair her broken hip:

I really don’t see her surviving the surgery, but if she had the will to go through it than I would allow it.

However, what if she doesn’t have the will? She was very, very unhappy over the latter part of this year – that is actually what led to her falling. In a 24-hour day, there might be joy at the prospect of seeing her family. But it was a few minutes compared to the many hours where she couldn’t see, hear, or function very well.

She has lucid moments and I know she understands. I’ve asked her about having hip surgery and she has told me “no” consistently. I know she is aware of the implications since she loved being able to do things for herself. The reality of her situation is very sad for her, I’m sure.

My father’s opinion is very resolute, which is another issue. There are no crystal balls. Look at what Zsa Zsa Gabor is going through.

Why is this so rare? I am being told that no one refuses this surgery. Aren’t there other people in the world who are not candidates for surgery at 86? Also, are there levels of “broken?” My mom’s fracture was not visible to the ER doctor. I believe that it is broken – no doubt, but is it possible it’s not as severe as a “shattered hip?”

Even though it’s painful for me to defend my position, it has actually helped me have more clarity about it by explaining it.

There is no crystal ball, but the main issue here is that there are two, potentially bad outcomes!

The fact that this decision is “so radical” is what really pains me. I am told that they have never seen any patient refuse to have this “repair done.”

I have weighed both outcomes and the surgery (although it gives her “a chance”) is what I actually believe is the worse outcome for her. Remember, I had a lot of experience with what my mom had to go through after her last surgery. I believe she will suffer far more with surgery.

It was not just a fluke that she ended up on the respirator. I don’t care if doctors think she could survive. My experience is that with statistics, there are always those that fall into the low percentiles. Of course, I am sad that my son died when I was told the odds were 95% he would survive his surgery.

I know the odds are horrible with my mom not having surgery – that’s what makes it so hard!

I’m looking at this as following my parents’ wishes and I want her to be comfortable. I think that’s my goal now.

Even with my parents’ mental decline – I think they both appreciate that I have given validity to their decisions. I cannot honestly say that they are not thinking clearly about this.

The last shred of dignity is almost gone for my father and he feels so excluded by doctors in general.

I sure understand how much he loves my mom and how he also understands the implications of this. If I reversed his decision against surgery – I would in essence, be destroying my father, too.

Trust me. It has been agonizing to make a decision like this.

Is my “courage” to not follow doctors’ recommendations that bizarre and unusual? I am getting a lot of feedback from many people who wish they had followed their heart in a situation like this. 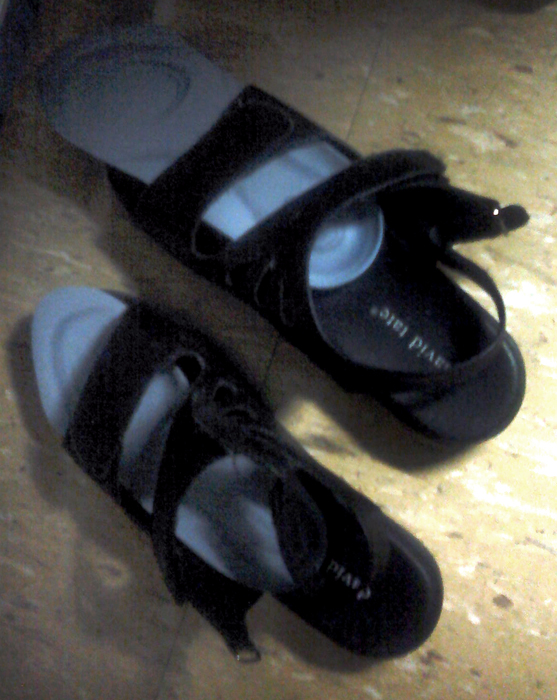 It was early in the morning when I came into my mom’s room. She was sleeping soundly, so I sat next to her bed and listened to music. The ache in my soul diminished as my melodies enveloped me with comfort.

In the darkness, I could see her shoes. I felt sad seeing them and remembered our shopping outing when we bought them. She loved those shoes, and now they weren’t going to be worn. They were still almost new.

The nurses told me that my mom fell because she heard her roommate call for help – my mom was worried and couldn’t wait until someone came.

Later on, I found out that the shoe inserts she insisted on had caused her to slip. When she fell, her foot slid and the Velcro also broke.

I put the broken shoe in my purse; I decided I would have it repaired. I wanted her to have her favorite shoes back to wear again someday. 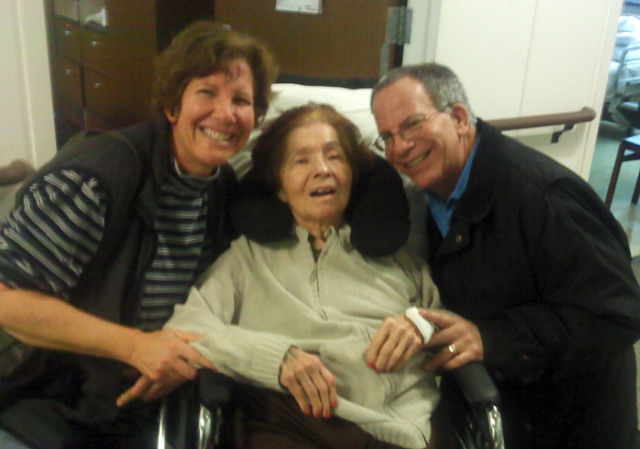 My mom woke up and I held her hand. We talked for a while. I could see that she had lost a lot of weight; her boniness was very apparent. As I fed her, she ate her breakfast with pleasure. She also finished a carton of milk and a cup of coffee.

Although she was confused at moments, she was also very aware. I explained to her about Hospice. Last night, I signed the papers to allow for her to receive their services.

She told me, “You know, there are times when we have no choice about our situation.” I knew what she meant.

Her medication was brought. I was told she was receiving a narcotic for pain. She wasn’t supposed to receive stronger pain medication unless she was in terrible pain – no one was listening to me!

Only the night before I had told her doctor that I did not want any narcotic medication given without my permission.

I looked at my mom and saw she was smiling. I didn’t want to lose her presence to a drug! If she was not in terrible pain, this didn’t make sense.

I went to speak with the nursing supervisor. For the umpteenth time I was told, “Your mom needs to move and with her pain she won’t be able to. She absolutely needs narcotics.”

I was direct. I said, “I have seen the effect of narcotics on her more times than you can imagine! My mom will have no motivation and no awareness. Let her try, and see what movement she is capable of first – it has only been five days since her fall!”

The nursing supervisor looked at me with disdain and said, “Why don’t you stick around and we’ll move her. You’ll see what I mean.”

I wondered if I was going to cause my mother pain in order for this woman to prove her point.

My mom’s wonderful caregiver, Miriam, arrived. I watched as Miriam stroked my mother’s neck and gave her such loving attention. Once again, I was grateful for following my heart in hiring her. Initially, both my mother and father needed to be convinced. Now, they were reliant on Miriam.

She was someone who turned out to be the greatest gift in my life at this time.

Miriam looked at me and said, “You know, if she is moved gently – she will be fine. I know it.”

Only this morning, I was happy to see a special wheelchair that reclined outside my mother’s room.

Two nurses came in. They looked strong and confident as they assisted my mother into standing position from her bed. She stood on her good leg and was rotated to sit down into the wheelchair. For a brief second she moaned and then she was sitting still.

A few minutes earlier, my older brother arrived. We both clutched each other and savored our amazement.

I exclaimed, “Mom, can you believe it? You’re in a wheelchair!”

I couldn’t believe my ears when my mother said, “This morning I thought I was in the ground!”

My mother had a sense of humor!

I asked my mother if she had any pain. She said, “Not really; I’m okay.”

Miriam gently covered her with a blanket. As her wheelchair was pushed along the hall, residents and nurses called out her name and came to see her. Her pleasure was quite evident. My mother had not given up. She didn’t like being in her room and the idea of going in the wheelchair thrilled her.

Her gaunt face was frozen with a slight grimace as she smiled. We passed the nursing station and I glared at the supervisor who told me she wouldn’t be able to handle being moved without drugs.

I wondered if this could be the beginning of a possible recovery. My mother survived being on a respirator; maybe I had underestimated her. Perhaps, movement would get easier for her.

She stayed in the wheelchair until lunch. That was three hours.

No narcotics yet. I was right about that. 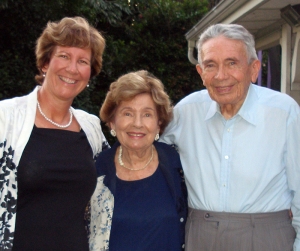 This was taken four years ago.

Text message from her caregiver, Miriam:

Judy, I just want to tell u something. I met a lady next door to your mom’s room. She said that she had 2 broken hips they didn’t operate on her and she is walking. I feel so hopeful about your mom. It’s okay for you to meet the lady too, and u can talk to her. 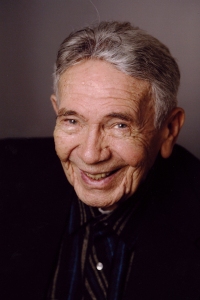 Another picture for a facility brochure. I almost never see my father smile anymore.

I haven’t written much about my father.

His depression has been so deep. Although he doted on my mother, his grouchy demeanor often left her in tears. I found myself defending him even though I had trouble with his grouchiness, too!

My mother missed him this morning. I called him. He said, “I can barely walk. I don’t want to fall apart and be a burden for you. That’s why I didn’t visit your mother this morning.”

“Dad, can you at least say good morning to mom?” He grudgingly obliged.

My father has been struggling. He has been angry. He had a car accident when he drove to the hospital to see my mom after her fall a year ago. After that, his license was revoked.

He has taken four driving tests as an attempt to reinstate his license.

There are five attempts for the behind-the-wheel test, which are allowed. Each time my father failed, he was certain he could have passed if he had another chance. He requested a provisional license that would allow him to only drive surface streets within a ten-mile radius. That allowed for him to have a better chance at passing.

He told me, “If I could drive again, it would change my life!”

I wondered about that. I knew his dependence was like poison for him. He loved living in a shared house, away from the nursing situation that my mom was in.

I am certain my father will allow himself to die of an illness rather than seek treatment someday!

Today was a big day for my father. He had an appointment for his fifth and final driving test.

My phone rang. My dad just informed me that he passed his driving test!

PHONE MESSAGE TO ME FROM MY DAD

I'm an illustrator by profession. At this juncture in my life, I am pursuing my dream of writing and composing music. Every day of my life is precious!
View all posts by Judy →
This entry was posted in Hip fracture-no surgery and tagged "sandwich generation", Aging Parents. Bookmark the permalink.