TO FACE WHAT THE FUTURE BRINGS

An amazing poem that I just found in a “lost folder.” I had clipped it from a Compassionate Friends newsletter. It was a perfect message for me and even included a last line about singing again! It was written by Helen Rice Steiner.

It was unseasonably warm. I had picked my son up from school for an appointment and we were finished. When he said he would love to stop somewhere for lunch, I thought it was a nice idea. I decided we could stop and get sandwiches; I’d bring one home for my daughter, too. I was thinking of a Subway Sandwich Shop and I remembered there was nearby.

As I headed that way, suddenly the memories flooded me. It was interesting and overwhelming. Why would I choose that Subway and why today?

There was a story for me with this and I could not help but write it.

I told my son what had crossed my mind.

I said, “We’re going to a Subway and this restaurant holds some very, sad memories for me.” Of course, he asked me why.

I told him. “I knew a woman. Her teenage son was murdered while he was working there. It happened late at night; he was shot in the head.”

Of course, my son wanted to know if there was still blood there. I thought to myself, I’m crazy! Why did I just tell him that?

We went inside to order the sandwiches. As we were leaving, I said to a young man at the register, “Did you know about the murder here? It was about 19 or 20 years ago.”

He shook his head indicating he had not. My son admonished me and said, “Gee, mom! Did you have to go and ruin his day?”

Although it was beautiful and sunny outside, my thoughts turned to the story I needed to tell. On my grief journey I have collected countless, sad stories; I remember each one very clearly.

Perhaps this is a story about “unresolved grief.” Teri was about the saddest woman I had ever met at Compassionate Friends, which is an organization for bereaved parents.

I remember Teri as kind, however her sad eyes told a heartbreaking story. Every story about a dead child is sad, for sure, however Teri’s sadness and anger were palpable for all the years I knew her. She could not contain her bitterness; her sharpness was off putting at times.

Teri was very witty and easily laughed, but she smoked constantly. It must have helped her cope. Her deceased son had a twin sister who was often at our meetings.

I cannot forget the story of her son, his senseless murder, and the wreckage of so many lives as a result.

I didn’t stay in touch with Teri after I stopped attending meetings. But until the last moment I saw her, her bitterness was very apparent. I heard she died of cancer a few years ago.

But today, I remembered her beloved son, Brian. Even if I have uncertainty about what happens with death, I like to imagine they are now “together” in heaven.

I am sad for those humans who are on the path of grief and anguish. My heart aches for them. I am especially sad for those who are in “zombieland” and might never experience true joy again in their life.

There was a reason I thought of this story. My insight is this:

I wish everyone in this world could find happiness again as I have. Unfortunately, there are no guarantees.

I can share my story, and I’m glad if it helps other people who are grieving to feel hopeful. When I clipped the words at the beginning of this post all those years ago, it probably gave me some solace.

At this moment, I feel so fortunate I found happiness again in my life!

And I will always remember Brian.

I came home from performing and I was tired. But I decided I wanted to look for something in my file cabinet; I was looking for a certain poem. When I started writing this morning, I wrote the line, “The sun continues shining.” I remember it was a line in a poem about Brian written by his twin sister. It was printed with some of my poems many years ago in a Compassionate Friends newsletter.

As I scoped through my file cabinet, I saw many stacks of grief articles and more recent newsletters. Then I saw that special, tattered folder. It was filled with many pages of my poems and words during bereavement.

I had looked for that folder before, but never found it. I did have a few, old Compassionate Friends newsletters in Jason’s box, which I scanned for earlier posts.

I glanced quickly at the pages; some were folded and others were written in pencil and marked over. There were photocopies, printed pages, and poems that I recognized from a long time ago. It was another coincidence for me that I had gone to that Subway and went looking for a certain poem.

At first, I could not read them; it was too painful. I pushed the papers aside. A few minutes later, I decided to try again. As I took in the written words, it felt like the “Judy of the Past” had come to visit me. There were so many pages of revelations there!

It was so eerie that I could hardly find a way to explain it.

How interesting it was to see that I already knew all the words I’d written in my neat printing. So many of the same concepts I had written on blog posts were there, despite the fact I had not seen my writing from long ago.

It was more than fascinating to visit with “Judy of the Past.” I don’t think she had any idea when she wrote those words, that some day a very, “different” Judy would be reading them.

Perhaps she might not have been so desolate if she had known about her transformation into “Judy of the Future.”

Or maybe she did know and wrote those words for a reason.

Below are the two poems of mine that were in the same newsletter with the poems about Brian. 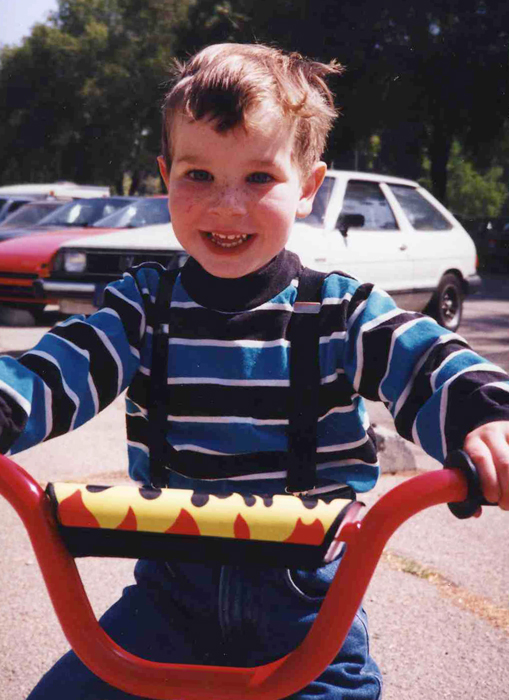 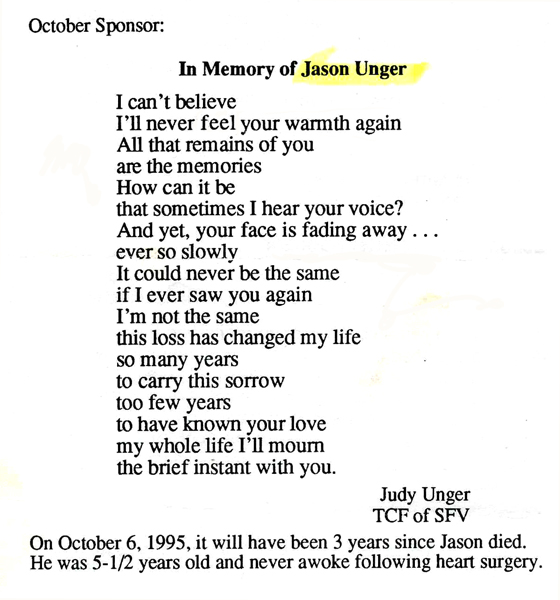 I'm an illustrator by profession. At this juncture in my life, I am pursuing my dream of writing and composing music. Every day of my life is precious!
View all posts by Judy →
This entry was posted in Grief Educational and tagged bereavement, compassionate friends, death, death of a child, grief, grief bereavement "Loss of a Child", grief poems, grief poetry, GRIEF RELATED, Helen Steiner Rice, loss, loss poems, mourning, Poetry. Bookmark the permalink.