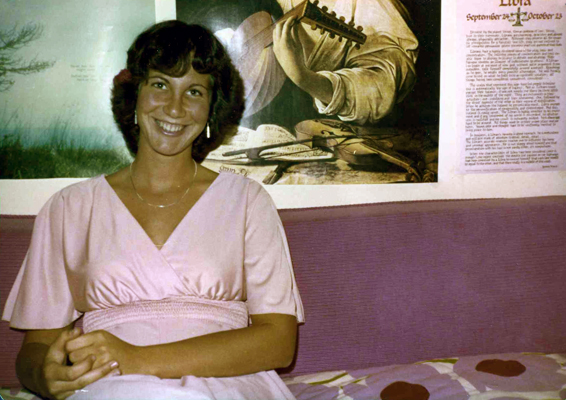 I am wearing my favorite, pink dress. My Aunt Sylvia bought it for me as a gift because of my friendship with my cousin, Debbie. My room remains the same – all the posters are still on the walls and the bed is there. Only no one can walk in the room because of my father’s “collection” of “stuff.”

My identity as an artist switched in high school. I was known in middle school as the “maze artist.” I also used to draw silly doodles of people barfing! Seriously!

That’s because I drew very few things from life, and that was something I could do without looking at anything.

I began to learn to play the guitar when I was about 16 years old. I remember learning chords from my Israeli teacher at Hebrew High School. I was in awe of his guitar chord abilities. I eagerly practiced to learn anything anyone ever showed me.

My greatest aspiration at that time was to learn how to play the introduction to the song, “Stairway to Heaven!”

Musical expression began to open my life up to new possibilities. When I joined my high school choir and then chamber singers, I formed the kind of memories that anchored me for a lifetime.

There was so much joy that came from singing in harmony!

The feeling of singing in harmony is actually kind of indescribable.

As I sang my heart out, I was enveloped in a chorus of interlocking melodies that are all audibly different from what I was singing. Concentration was required to sing my particular part; however, when I was with my group of other altos, together we would lock in our part. The intricacies, tempos, and complexities of those separate parts coming together would cause my heart to soar.

Most of the musical pieces our choir performed were in Latin, because they were Masses. During lunch, I would practice with my fellow choir members.

The music that I was learning in my high school choir was also incredibly beautiful. Much of it was extremely challenging, due to our teacher’s high expectations.

I spent so much time singing with my friends; those were wonderful times.

I still remember distinctly driving home from the beach. The windows of my car would be open and all of us would be singing our hearts out with separate harmonies. Those memories make my heart sing even now.

I learned all the Christmas Carols. It might be funny to imagine, but here I was – a Jewish girl, and I went Christmas Caroling with my choir buddies. I loved singing that music so much!

One of the exciting milestones in my life was when I began to compose and perform with my guitar. I would accompany others as well as sing my own pieces. I began to study classical guitar.

Our choir group held monthly “Coffeehouses,” where I would practice diligently for my performance! My greatest aspiration was to impress my choir teacher.

In my senior year of high school, our choir traveled to San Francisco to perform at a church there. My memories from that trip are hazy. I remember feeling quite carsick on the bus ride past San Simeon, and I also remember that I upset my choir teacher during our rehearsal. I was a little too chatty and Frankie was frustrated with everyone’s hyperactivity! It was difficult to see my teacher so upset.

My high school choir teacher’s name was Frankie Nobert. She was an outstanding professional; she was not “warm and fuzzy.” She appeared aloof and demanding, however, she was passionately committing to making our choir the best it could be.

I was a “cottage,” and she was my “sky scraper.” I trembled in her presence! I was in complete awe of her. I lived for her encouragement and for her approval. She was brilliant, and demanded that her students perform not only to the best of their ability – but without any possible limitations!

I remember, one day when we were singing a particularly beautiful passage of one of our masses, she suddenly stopped. The room became quiet. She began to speak softly. She said, “That was so beautiful; it made me cry.” A tear was coursing down her cheek.

I was not a particularly gifted singer, but I gravitated to those that were. I accompanied them, and appreciated their musical gifts. At those “coffeehouses,” I shivered in anticipation of playing for my teacher. I viewed her as a “Musical God,” and her approval meant more to me than anything in the world.

During the time I was in high school, I was looking for a best friend. My experience of being hurt by Elena was the beginning of a very slow process. The realization that it wasn’t something that was realistic didn’t come to me until far later in my life. While I was in the choir, I learned the joy of becoming part of a larger circle of friends.

My friends included Amelie. Amelie was quirky, but very funny and extremely intelligent. I didn’t realize how picked on and unhappy Amelie was. Because she was different, she was teased and discarded by many people. Amelie told me about five years ago that she discovered the reason for her torment; she had Asperger’s Syndrome! I certainly knew a lot about that.

After I graduated high school, I returned fairly often the first year. I still had a lot of younger friends that were in the choir. I enjoyed seeing their performances. Beyond that year, I lost touch with most of my choir friends.

I did stay in touch with a few for at least ten years. Recently, I connected with one friend from my choir experience. She had lost an older son in a tragic car accident last year. I was very sad for her.

I never lost touch with Amelie. About twenty years after high school, Amelie mentioned that occasionally she still saw our teacher, Frankie. Amelie and I decided it would be interesting and enjoyable for the three of us to get together for lunch sometime. Amelie said she could arrange it.

I was nervous at our first lunch after all those years.

I was now an adult, and not looking up to a skyscraper anymore!

It was wonderful to visit with my teacher. I was privy now to information that I had no idea about when she was my teacher. She shared about her divorce, and about the man she was currently connected with. It was a very deep and special connection.

One thing that I learned from Frankie was that as meaningful as my high school choir experience was for me, it was also special for her. That had never occurred to me. It turned out, that those years teaching high school were passionately satisfying and memorable for Frankie, as well.

Frankie was proud of me. In the past I would have been dancing around with joy at her approval. However, I was an adult now. It was satisfying to know that I had done things in my life and I had been able to share my achievements with her. At that time, I was a leader for the Compassionate Friends organization.

The achievement that I was most proud of was the fact that I had survived the death of my son!

That first lunch, which was twenty years my high school graduation, was the beginning of an annual tradition. Amelie, Frankie and I would plan one every year after that.

It was actually six years later. We had just met for our annual lunch, and it was actually not too far from my home. Amelie had left, but Frankie said she could come to my home for a few minutes to see my art studio.

There was something different about this lunch, however. Frankie was grieving. Her beloved partner had suddenly died of a heart attack in her presence. Her pain was palpable and raw. It had been perhaps only six months earlier.

That is a most difficult time in the grief journey. At about six months, the shock has begun to wear off. The reality sets in just as people who are uncomfortable regarding grief begin their chorus. That chorus is, “You need to get on with your life! It’s time to move on!”

Her eyes were deep pools of despair and sadness. We talked awhile, and I pulled out old, Compassionate Friends’ newsletters for her. She took everything I gave her as if it were a bible. It didn’t matter that it was about parents grieving dead children. It was comforting for her to have something to read addressing her heartache; it was because it was about the pain of loss.

She was ready to allow it to be acknowledged and to come out. She decided to seek grief counseling after that day. She said it helped her tremendously.

Now the teacher I had always looked up to was forever linked to me by grief. After that, our bond was deeper. I was now a skyscraper!

Ironically, all through high school I was celebrating friendship. I find it most interesting that I have an enduring friendship with my teacher now. I would never have imagined that back when I was seventeen years old!

True friendship occurred for me when we were both “two buildings; side by side.”

When my mother became ill, Frankie’s email messages were always comforting. All of my friends had unique styles of replying to my email updates when my mother was on a respirator.

Frankie’s messages were always very brief, supportive, and loving. In one sentence made of only a few words, I was able to feel comforted. Her messages were often placed upon beautiful backgrounds, which I knew Frankie had chosen to enhance her message. As an artist, I appreciated this and she knew it, too.

Amelie and I shared in attending Frankie’s 70th birthday party a few years ago. This past Sunday, we attended a concert where Frankie performed on the organ. She is quite an accomplished organist, and travels all over the world performing.

When I am writing, I look inside my heart to write my memories. I always have “attachments” to look at, but I look at those after I have written from my heart. I share my attachments in the next post, because they help to “flesh out” my story.

During the years after I reconnected with Frankie for our annual lunches, we talked about life. I wasn’t involved with music anymore, and that wasn’t important to our friendship.

My very recent rediscovery of what music means to me, has been very exciting to share with my teacher. She is a musical genius, and I am a heartfelt woman expressing feelings through my lyrics and song compositions.

Frankie and I embrace the same thing. When music surrounds our heart, we are buoyed and we are comforted. Frankie says that music helped to heal her soul during her grief journey.

I believe that. Since I’ve begun playing my guitar again, I have felt much better. 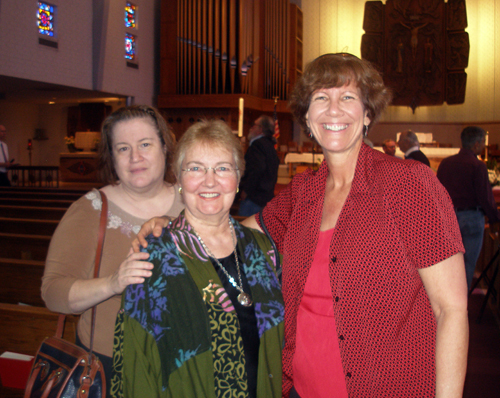 Frankie, Amelie, and I at her 5/2/10 organ recital in Sherman Oaks.