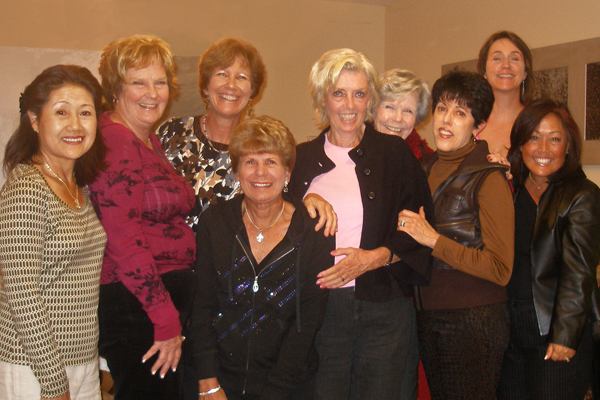 Just some of my friends from my 50th birthday party last year.

I didn’t care for my title Tennis – “The thread in the fabric of my life,” once my daughter informed me that “fabric of your life” is already a slogan in use by a cotton company. Oops!  It felt so original, but isn’t that how it goes sometimes?  I must have heard that before, and it stuck in my subconscious. I’ve learned a lot about that from hypnotherapy!

Since I love puns, here are my alternative titles for any more posts related to tennis:

“SHUTTING UP ALL THE RACQUET” (in my head and house)

“A SWINGER – SOMETHING NEW & DIFFERENT”

“GET A HANDLE ON IT”

“HEARTSTRINGS, GUITAR STRINGS, & TENNIS STRINGS!” (I love this one)

“HITS IN THE MAKING – SONGS & TENNIS”

“I’ve met so many different, interesting, and amazing women”

I could write so much about how tennis has kept my sanity. However, it really began to be clearer to me when I had children. When my first child, Jason, was born in 1987 with a severe, congenital heart defect there were no words to explain my devastation. I had a lousy pregnancy with morning sickness that wasn’t about vomiting. Instead, I kept eating to prevent that horrible feeling I had. I am able to admit that I gained one hundred pounds in my first pregnancy. Since I’ve been writing about tennis, imagine the effect of all that weight on my tennis game!

Jason lived for five years, but I remember clearly that after he died there was a tennis game the day after his funeral. Everyone was quiet, and of course, we all didn’t say much – what else was I supposed to do? Mourning at home vs. playing tennis wasn’t a difficult choice.

The first years of bereavement were numb, but I also remember that I would always cry while driving in the car. It was the most perfect place to cry. Since I often drove to tennis games, I was amazed at how I would sob as I drove, park my car, and then get out to play.

In all areas of my life besides tennis, I came to grips with the feelings of being a bereaved parent. In the beginning it was hard to hear my tennis friends worrying about trivial nonsense. Then, sometimes it became quite hard not to feel pangs about the achievements of children that did not have “issues” like mine had.

Worse yet, was hearing about all beautiful jewelry that my tennis friends received from their husbands. My guy hasn’t bought me any jewelry, though I could always go out and buy some for myself if I wanted it badly enough.

However, because I have always taken a lot of pride in my artistic endeavors, I was able to deflect many of those pangs.

“Grateful for the two-hour break”

Outside of tennis and my old friends, I surrounded myself with many people that had circumstances far worse than mine. I ran the Compassionate Friends (Bereaved Parents and Siblings) support group for several years, and later on became involved in my “Special Mom’s” support group. In those places I was able to feel connected through the sadness, where my feelings were understood.

However, I was always grateful for the two-hour break I had while playing tennis. I played tennis on average two times a week, and I met so many different, interesting, and amazing women. Most of my tennis friends know it has been the key to my survival!

Last year, when I had my fiftieth birthday approaching I was definitely in my “zombie place.” It felt sad to me that my life had been so challenging and I didn’t feel like this milestone was any celebration, for sure.

I can share that my “opening up,” resulted in a wonderful party made in honor of my fiftieth birthday. Tennis friends from the last twenty years or so surrounded me; some no longer were even playing tennis anymore.

It’s important for me to also share that outside of our doubles games, I never socialized much because I always had to get home to illustrate or deal with my childrens’ issues.

It was such a perfect birthday; to be surrounded by such a fabulous gathering of wonderful woman. We all knew each other, but hardly recognized each other with makeup on out of our tennis clothes!

“I had so many revelations today”

It was a joyous day! I woke up early to “fill in” for a 10:30 a.m. tennis game at a well-known country club this morning.

Usually, I try to avoid playing two days in a row. Yesterday I played in a workshop, and I also have a game scheduled for tomorrow. That would make it three days of playing tennis in a row!

But I’ve been looking at things as “new and different” these days. I’ve dropped thirteen pounds. The tennis lessons I’ve recently begun to take have definitely helped me improve. Lastly, because the sun was shining instead of the rain that had been predicted . . . well, why not?

This woman that called used to play with me fairly regularly for at least two to three years, once or twice a week. This friend that called me probably was probably a little exasperated with me the last time we played. I am not known as a “quick runner,” and that’s saying it lightly. I was eager to show her my improvement!

I’m still about fifty pounds overweight, though I am athletic. I rely on knocking the tennis ball about 100 miles an hour, hoping that it will not come back to me! My best shots are usually returning and serving, because I don’t have to run for those.

Carrying the extra weight, plus having arthritis in my toes has been frustrating. However, it is totally overcome by the outrageous freedom and release of stress achieved for me by hitting something as hard as possible.

All of my friends are quite aware of the danger, and usually stay back when I am returning serve for that reason.

I had so many revelations today, besides having so much joy while playing. I realized how much more open I’ve become!

One of the other players in the game was a woman I had played with on a tennis team about 18 years ago.

Like many of the fascinating people I have met through tennis, this woman was a pediatric gastroenterologist. She remembered me well, because I used to discuss things with her about Jason (my deceased son). Jason vomited most of his food, and he had seen a gastroenterologist on many occasions. As I have learned to do, picking someone’s brain is always useful. So this day began with another moment of reconnecting.

When she asked me, “How are your kids?” I shared with her that Jason had died.

The friend that invited me, that I’ve played tennis with every week for several years did not know I ever had a child that died!

So that’s why I always called myself a “poster child” for bereaved parents! She never even heard me mention it. For the last ten of my eighteen years of bereavement, I have been so proud of the way that I’ve “moved on.”

Still, I was amazed that this major, life-shaping event that had changed me was never revealed to someone that had known me for a few years.

After our wonderful tennis game, I shared my experience with my 84-year-old mother on a respirator for two months. When I finished my sharing, I truly felt like I was a participant in a Hallmark movie. It couldn’t possibly be real; that I had come through this major stressor in my life. I was so happy that the sun was shining and I was healthy enough to play tennis.

There was no avoiding the depression I was feeling about my approaching fiftieth birthday. I heard about all kinds of ideas to celebrate, and attended a few of my old friend’s parties. None of my old friends knew each other, and I didn’t feel like putting them all in a room together. I couldn’t afford a trip, a piece of expensive jewelry, a big bash, or anything else that might have alleviated my sadness.

Why was I sad about turning 50? I’m sure you all understand those feelings about the years accelerating as we get older, and certainly, our bodies aren’t want they used to be. However, at this moment I totally appreciate how fortunate I am today.

I don’t even know how to begin to thank Lauren for her idea, and Janet for hosting and inviting all of you. I am in awe of everyone coming here and contributing to my party. You have not only shared with me your delicious food, but your love as well!

I can only tell you how appreciative I am for your support all these years. Playing tennis with you represented the place where I was able to become rejuvenated and have my stress lifted for those two hours.

All of you have shared with me so much, even if it has been awhile since we’ve played. There is nothing in the world that could be more perfect for me than this. My friends who shared with me the only moments in my life where I could “let it out” surround me!

During the darker times, I was so sad that I would cry in my car driving to the tennis court. I would wipe my tears away, and get out of my car to play with you, hoping no one knew that I had just been sobbing.

I could always count on being with wonderful woman where I could be myself. I apologize to any of you that I smashed a ball into. I definitely took chances; hitting way too close to those of you at the net. I wasn’t aiming at your face, but I certainly could have played more crosscourt shots, which would have been safer for everyone.

Also lately, I have been saying some very bad words (is my family gone?). So I apologize for that, too; it must be part of the freedom of turning 50. But it’s so much fun!

Thank you again for making my fiftieth birthday something I will never forget. I am so honored by this amazing turnout of friends, and I’m thrilled for all of us to be together outside of the tennis court.

My party was at Janet’s home, and she is on the right. She is a screenwriter, and has been very supportive of me.

I'm an illustrator by profession. At this juncture in my life, I am pursuing my dream of writing and composing music. Every day of my life is precious!
View all posts by Judy →
This entry was posted in Uncategorized and tagged Humor, Tennis. Bookmark the permalink.

9 Responses to GET A GRIP