YOUR HAND WAS THE ONE HOLDING MINE 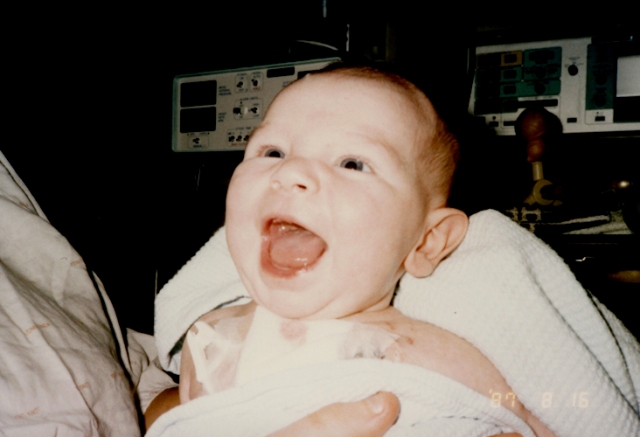 This photo of my son, Jason after his first open-heart surgery reminds me how it is possible to laugh and smile despite difficult circumstances. 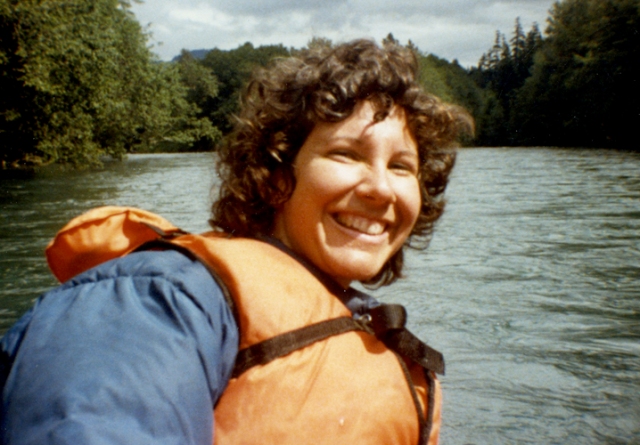 Memories I treasure, being outdoors when I was in my twenties.

It was a Saturday. I drove to see my mother at her nursing home for our weekly lunch outing. As I sat trying to hold it together, my mother continuously beamed at me. Her dementia did not allow her to converse anymore, but I could still feel her love. I tried hard not to appear distraught.

It was after I dropped my mother back at her nursing home that I received the phone call.

It was so beautiful and amazing that it left me breathless.

I believe God definitely sent me a message to help me. 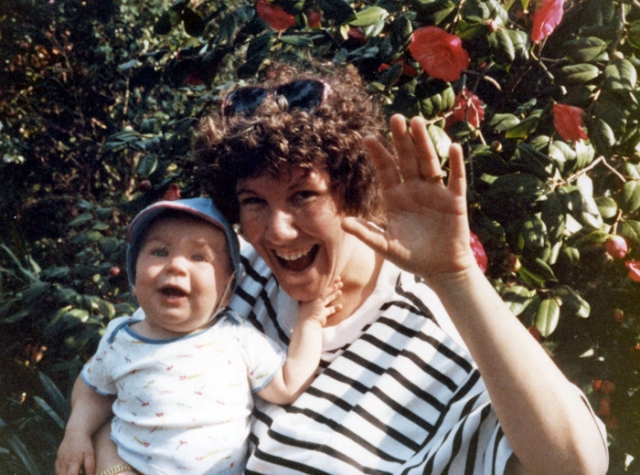 While looking for pictures of an old friend to add to my story, I found more beautiful pictures of Jason to share on my blog. 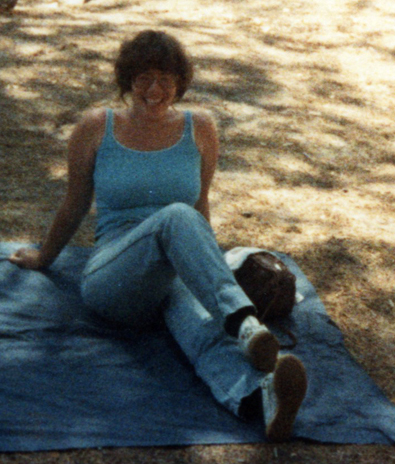 I wrote my story with flashbacks interspersed. They are in purple italics.

“Judy, it’s Jeanne! Do you remember me?”

My heart skipped a beat as I yelled, “Are you kidding? Of course! I would never forget you!”

It was three days after Jason’s funeral. I was numb and in a fog. But Jeanne and her husband Josh were at the door. They had come over to make breakfast and I was so grateful to see them. I was filled with desperation. There was no one else who understood my desolation – no one. It was because Jeanne had experienced a stillbirth many years before; to me, she was an expert about grief. Her explanations comforted me and I could never get enough. But it always led to the same place. I needed to know when the agony would subside. Sadly, it had only just begun.

Jeanne was crying as she said, “Judy, I was thinking of you and looked you up on the Internet. I have been reading your blog. Oh my God, you had me crying and laughing! I saw Jason’s pictures, heard your music and caught up on your life. You are such an incredible person and a gifted writer. I am so excited about where you are going with your life. I couldn’t wait to call you!”

Then that explained the 200 views I had on my blog one day last week. I knew someone was reading a lot of pages and I had a premonition about it. I often wondered about certain people from my past and hoped to hear from them someday. Jeanne was definitely one of them.

Jeanne explained why she had looked me up. It was because of her anniversary of the heart for Jillian. Her beloved little girl would have been 25 years old had she lived. She said, “There’s no one I can share that day with anymore. My ex was the only one and that’s over. But then I thought of you; I went on the Internet to look you up.”

I told Jeanne I had a calendar with events marked on it. Her daughter’s anniversary of the heart was there and whenever I saw it, I always remembered Jeanne and what she taught me about grief through Jillian’s death. I would never forget how much she helped me during my horrible grief.

I wailed to Jeanne – I couldn’t smell Jason anymore. I was forgetting him! Jeanne was patient and gentle when she said she had felt the same way. She said that the fear of forgetting was very real. I cried and cried to her.

Jillian had died on the day she was born. I remember Jeanne breaking my heart when she shared how Josh carried his tiny dead infant daughter throughout the hospital so he could show everyone how perfect and beautiful she was.

I wasn’t feeling better. I wished I were dead. The only time I felt better was when I was with other people suffering the same way. I went to support groups several times a week; I searched high and low for them. Some support groups weren’t specifically about losing a child and weren’t as helpful for me. But it was better than nothing.

I wanted Jeanne to tell me about the group that helped her so much after her loss. I begged her, but she kept hesitating. After constantly badgering her, she finally told me why. She said, “Judy, I don’t want you to go this group. I’m concerned that you might say that your loss is greater because your child lived five years. This group is for infant loss, and there are people there suffering through miscarriages. If you say your loss is greater that would be very hurtful for them.”

I always remembered her words. I have written a lot about grief and about grief comparisons. It breaks my heart recalling how Jeanne and Josh were there for us, while constantly hearing from my family, friends and even from me how their loss was not comparable to mine. I totally readjusted my thinking after I healed from my grief. I do not believe in comparing grief anymore.

Both of us continued babbling. Jeanne’s tone was firm when she mentioned that she wanted to talk to me about my singing. She reminded me that I had performed at her wedding. I’d forgotten! It was the one and only time I had ever done something like that. She gushed to me about how much she loved my voice. My presence and the song I played at her wedding was something unforgettable to her. It was such a unique and beautiful song, but I no longer remembered how to play it. I wasn’t sure when to mention to her that I knew about her divorce because I had run into Josh.

I loved playing 70’s songs. Judy Collins had a sensitive, sweet song named “Since You’ve Asked.” I was extremely honored to play it for my friends’ wedding. The wedding was held outdoors and it was a warm day. There were orchards and sweet blossoms that intoxicated me as I gently fingerpicked my song and sang from my heart. It was a beautiful moment; singing next to my good friends with their eyes locked in love.

We talked about what had happened to our mutual friends. I had met Jeanne and her husband Josh at a workshop called “Making Marriage Work.” Just writing those words gave me a pang in my heart. Perhaps the class did work somewhat, as I had stayed married for many years through tribulations that most couples broke apart from. And the class did not work for Josh and Jeanne either.

Six years ago, I was shopping at the market when I heard a voice behind me. I was stunned; it was my friend Josh whom I hadn’t seen in seven years. I couldn’t believe it. He had gone through gastric bypass surgery and lost over 100 pounds; I hardly recognized him. He told me that he had gotten divorced and lived in the area. I took his business card and a week later I invited him to dinner at our house. My husband and I caught up with him over that dinner. I felt very sad when he talked about Jeanne. I realized that I was hearing only one side of the story. As he spoke about the deterioration of their relationship, most of his words flew over my head because it sounded so painful. Even though my husband and I talked about seeing him again, it was the last time we saw Josh.

I tried to remember why my husband and I had lost touch with Josh and Jeanne. We had been close friends for about 20 years. At first, I thought it had to do with the problems I faced with my living children. For at least a decade, I was so encompassed with their challenges that there was little time left in my life for friendship. Then I remembered that they moved to another state and that truly was the reason. But they did end up moving back and I last saw them at my fortieth birthday party, which was a surprise for me.

We continued talking for a long time, until it was time for both of us to hang up. As I said goodbye, I hoped I would get to see her again soon and catch up more. She didn’t live too far away from me.

Jeanne told me she certainly understood about the sadness of divorce after a long marriage. It was then when I told her how I had seen Josh. It was wrong of me to have been so cavalier about seeing him when she wasn’t there and I wished I had been more compassionate.

She shared that she had never said anything negative about him and didn’t feel that it was fair for him to have done that. I certainly agreed. I never wanted to hurt my friend, but I did. I had no idea how hurt she was. If I could rewind back in time I would have done things differently. 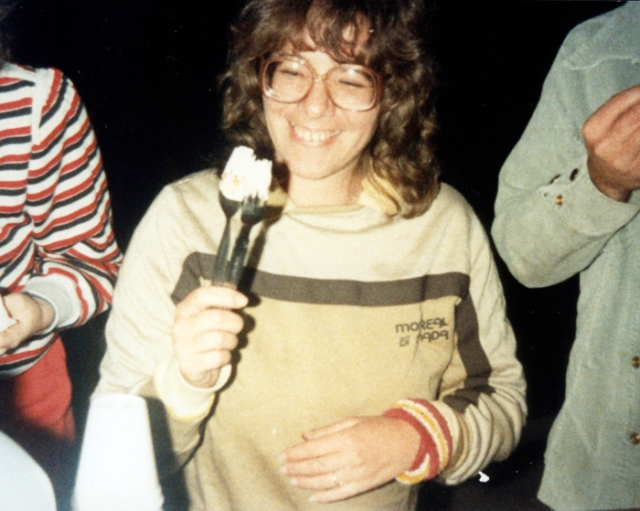 This is Jeanne on a camping trip. My husband and I stayed close for many years with five couples from a class we attended called “Making Marriage Work.”

It turns out that this picture I have with Jeanne was the last time I saw her.
This was taken at my fortieth birthday party, which was 13 years ago.

I'm an illustrator by profession. At this juncture in my life, I am pursuing my dream of writing and composing music. Every day of my life is precious!
View all posts by Judy →
This entry was posted in Uncategorized and tagged Cataracts when in fifties, child's death, compassionate friends, crystalline lens capsule, divorce after a long marriage, eyesight and aging, Friendship, friendship and grief, grief, grief bereavement "Loss of a Child", GRIEF RELATED, infant loss, inspiration, laser capsulotomy, loss, marraige and friendship, memories of friendship, mother daughter relationship, reconnecting, reconnecting with an old friend, separation, stillbirth. Bookmark the permalink.

7 Responses to YOUR HAND WAS THE ONE HOLDING MINE