Jason on his very, first birthday.

I have completed the first draft for my book, and I am simply astonished by how much I’ve written. My book encompasses many stories from my blog and will be the first of two books that I plan to write about my healing through my music.

My father has been proofreading the many pages I’ve printed out for him to read. He has always been a teacher, and he has constantly corrected my grammar. In two weeks, he will be celebrating his eighty-seventh birthday. At the end of my book, are my words entitled, “He Was There,” from my last post. I’m not sure whether to share that with him or not, because he cannot read anything related to Jason’s death.

Last week he handed me back a stack of pages surrounding Jason’s story. He told me tearfully he couldn’t read those because it was far too painful for him.

Today, he was released from convalescing in the nursing section of his facility. He went back to his former, independent living situation. I was his hero yesterday, because I convinced his doctor to allow him to move back. My father thanked me with every ounce of his being, which felt nice. I never thought our roles would be so different. He told me I held his destiny in my hands. I’m hoping his presence closer to my mother will help her with the progressing confusion due to her dementia.

I still have teenagers. That has held a lot of challenge for me over the past week. I was also quite busy with at least ten doctor appointments between my children and myself. Still, I managed to do something that caused me amazement. I might not have written for my blog, but I was definitely writing.

I was writing a song!

Listening to my audio below tells the story. I share the instrumental version and my wonderment discussing my “song’s birth” with my voice teacher, Peaches.

I am sharing a preliminary vocal here. My greatest joy is imagining how my song will sound when I arrange it with George. It is apt perhaps that I am planning to record it on Mother’s Day, which is a difficult day for most bereaved mothers.

Link to stories and lyrics for this song:

“As the season changes”

She began to write. There were so many things she remembered.

At first it was a torrent, a swollen river roaring through a tiny creek. There were endless stories flowing, and so much sadness. Over time, the torrent became a gentle river. There were fewer stories.

Music was always playing. There were so many melodies she remembered. She recorded all of it because she never wanted to forget those melodies again. All of the music was from her past, and soon there was nothing left for her to remember anymore.

The lyrics for her very, last song from the past voiced her exuberance about how her life had changed so much. The melody was musically very bouncy and filled with joy. She wondered what would happen next, because she felt empty inside.

It was time for her to begin to write her first, completely new song. She began to play. For some reason, she tuned the guitar differently to find a certain, poignant sound. It was quite beautiful hearing the chord changes; it was like putting “a puzzle together” as she constructed all of the chord progressions.

Gradually, all the “puzzle pieces” began to fit. There was only one way for it to sound, and she decided it was perfect. Hearing the instrumental creation was quite emotional for her.

She knew her life was stressful. When life closed in on her, she could feel the overall heaviness. Her sadness began when the weather began to warm up. It was a reminder for her that as spring changed to summer, and her dead child’s birthday was approaching. It would be nineteen years since he had died.

Her music spoke to her without words, and evoked many feelings. With every minor chord she could feel her heart ache. She had channeled her sadness into the music.

What words could she write? She always began to write lyrics by scrawling anything that came to mind. She searched for words to explain how her “ache” felt and they came to her. The new lyrics held exquisite rhymes, never an easy feat for a songwriter. She always avoided clichés whenever possible.

Her song was born! She felt amazement that no chords or melody had ever existed for this song before; it was completely new.

She had a lot of difficulty playing her new song without crying. 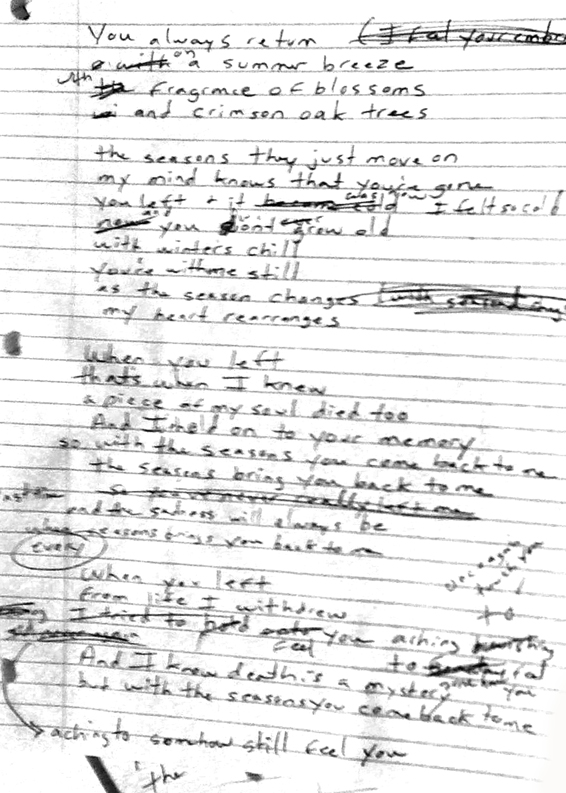 I'm an illustrator by profession. At this juncture in my life, I am pursuing my dream of writing and composing music. Every day of my life is precious!
View all posts by Judy →
This entry was posted in Uncategorized and tagged "sandwich generation", acoustic guitar, Aging Parents, Caregiving, child's death, composing, creativity, death, death of a child, grief, grief bereavement "Loss of a Child", GRIEF RELATED, guitar, inspiration, loss, lyric development, lyric writing, lyrics, Music, original songs, parenting, seasonal change, singing, songwriting, the seasons, voice lessons, writing. Bookmark the permalink.

3 Responses to YOU ALWAYS RETURN