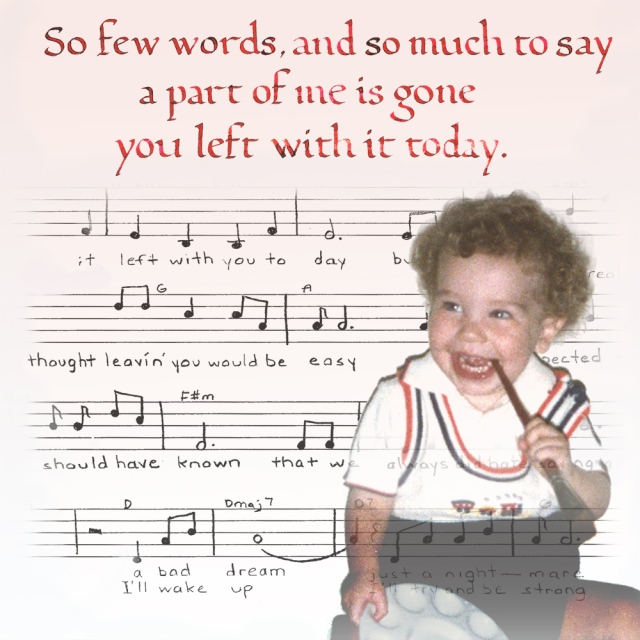 Link to song page with story links, a performance and recordings: SAYING GOODBYE–

I am writing this post before I leave for a five-day family vacation tomorrow to Ventura. So I am saying goodbye! Of course, I’ll be back by next weekend

Family vacations have never been relaxing for me; however, I’ve been doing far less for my family these days. I’m hoping they’ll appreciate spending time with me, and I’ll try really hard to not listen to my iPod unless they’re doing something else. I plan to bring my old, classical guitar along so I can play a little in the middle of the night!

I won’t be writing while I’m gone, but I’m sure I’ll look forward to sharing something when I return. Next weekend, I have two performances at Border’s, so life will be busy. I’m also meeting my high school music teacher for lunch on Saturday, and that is quite exciting for me. The last time I saw her, I was not a singer! (I still don’t consider myself a singer, by the way.) My teacher, Frankie, was very supportive last December when my mother was ill on a respirator.

I also named this post, “Saying Goodbye” for my song with that name.

I began writing songs when I was sixteen-years-old. The emotions in my life were channeled into each and every song, as well as projections of love and loss I hadn’t yet experienced.

I made a conscious effort to make every song of mine different. I know I have mentioned more than a few times that my songs are like “babies” for me. There was definitely a “birthing” process for every song I’ve written.

“Saying Goodbye” was written when I was nineteen. Originally, it was a break-up song. I decided to break up with Michael because he was always unhappy that I wanted to date a lot of other guys. Imagine that! He pouted a lot, especially when I told him I wanted to date other people. I finally decided he was so unhappy with me; that it was best we stop seeing each other since I was so immature.

I’ve mentioned I was fickle, and I did miss him. Therefore, I wrote him a song. The story goes that I ran into him six months after that, and I decided we could get back together. A year later we were married. This year, we will have been married thirty years.

This song always felt very meaningful for me. It had a strong, strumming beat that ended with a musical crescendo. I could sing out loudly and passionately on this song!

After my five-year-old son, Jason, died in 1992, singing was not joyful for me at all. However, I derived comfort by playing certain songs at his gravesite and performing them in situations such as the holiday gathering of the Compassionate Friends.

For thirty years, I played the same song for my children – Puff the Magic Dragon. In this picture, I’m with Jason and he loved my guitar playing. Currently, my 13-year-old son enjoys singing also.

I changed the lyrics to three of my songs. The songs were: Beside Me Always, More Than You Know, and Saying Goodbye.

As I have been in the process of “rediscovering” my songs, I have wondered which version of “Saying Goodbye” I would record.

Late last night, I was busy typing out the chords for my arranger, George, as well as for myself – since I use a capo on my guitar to play in a comfortable key. I typed out both versions – the break-up one, as well as the one about loss. The one about loss could also be about a break-up, and felt much truer for me.

However, I was aware this song was far less “unique” if I chose to make it another song about loss. I have quite a few of those!

The lyrics have a lot of similarity. I mention “the flowers have all died” – Michael used to always bring me flowers while we were dating. In the revised version, the flowers refer to the ones that died after the funeral.

I was in my bathroom practicing this morning. I came out to get ready to leave to record my song. My husband looked up from where he was and made a comment to me. He said, “Who is in love and do you know who died?”

I looked toward him and said, “Did some celebrity die that I should know about?” I was actually puzzled!

Then he said with a playful grin on his face, “I was asking you that question because in every one of your songs, either someone’s in love or someone’s dead!”

I guess if I ever write a new song, I’ll have to come up with some other subjects!

I thought perhaps I would do two sets of vocals, however, there was only time for me to record one version of my song. I sang over and over for George, until tears were oozing out of my eyes. It was hard work trying to get the feeling into my voice. It wasn’t that I didn’t feel it; I just didn’t hear it in my voice.

It was also exhausting working with George on this song’s arrangement today. I am not that rhythmic, but my guitar playing has improved significantly since I started playing again this past January (after thirty years).

Audio from my voice lesson on 8/16/10 with Peaches below:

So few words, and so much to say

A part of me has gone

It left with you that day

Now it’s all over, and the flowers have all died

And the hole remains inside

And I always expected to cry

A bad dream, just another nightmare

I wish that I’d wake up, and somehow you’d still be there

But I’m hanging in there; trying to be strong

I can’t live in the past, because something went wrong

The memories are forever, locked inside my mind

And the hardest thing of all, is to leave your touch behind

I always expected to cry

I always expected to cry 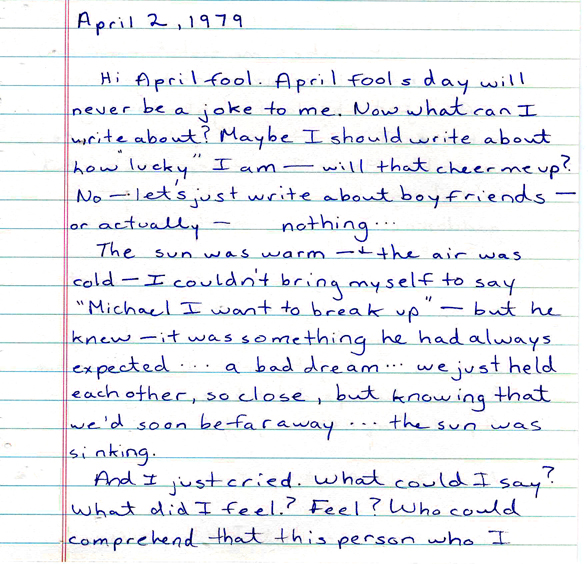